Homemade Naan (and Garlic Naan too!)

Soft and tender homemade naan. With just a handful of simple ingredients, you can learn to make some of the best naans at home. You can even top them with garlic butter if you’d like! And you can freeze them too! 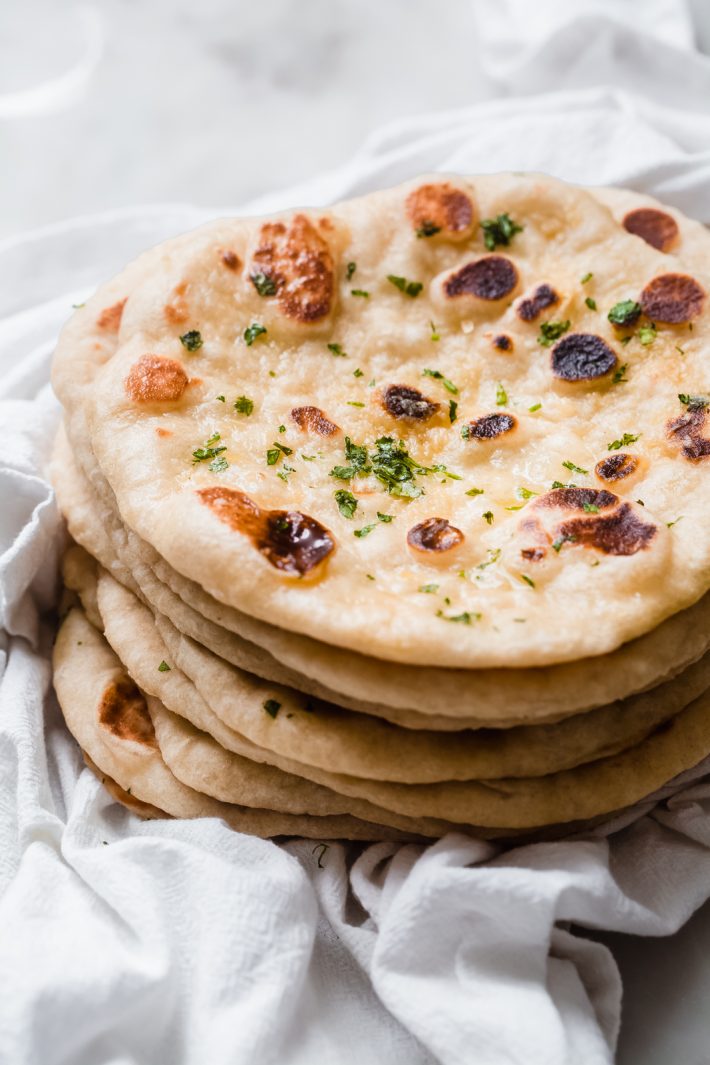 Fluffy tender and so irresistible.

So much you can do with homemade naan! This recipe uses everyday pantry staples that I’m willing to bet you already have and turns them into soft and fluffy naan that tastes just like it came hot from your favorite Indian restaurant.

Take it from someone that eats Indian food at least once a week; these naans are the real deal. They’re tender, a little chewy, and brushed with garlic butter for good measure right at the end. I shared a batch with my parents, and they couldn’t believe I actually made them! They kept raving about how soft and tender they were, and I just sat back and let them go on and on. You know why?

Because these homemade naans are just that rave-worthy! 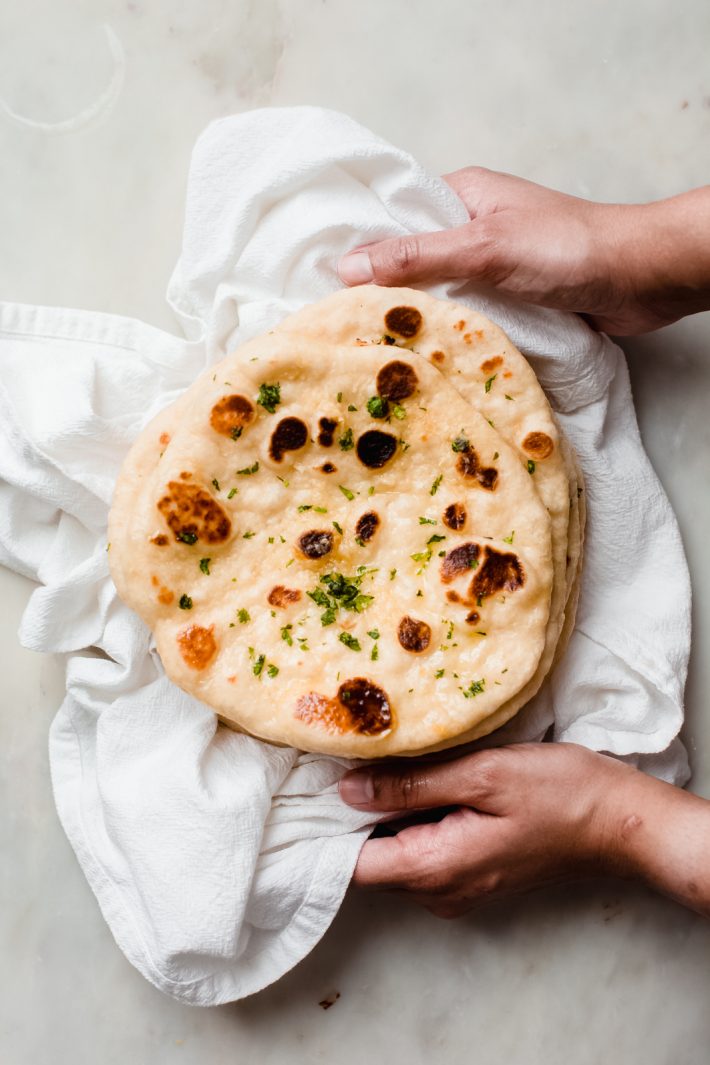 What are homemade Naan?

Naan is a type of Indian or Pakistani flatbread that is leavened and somewhat similar to the pita bread. Typically naan’s are shaped and clung to the walls of a hot clay oven, called a tandoor. The tandoor quickly cooks and puffs up the naan leaving you with a tender bread that is served with seasoned sautéed vegetables, curries, and stews of all kinds.

What ingredients do I need to make homemade naan?

What if I only Have Active Dry Yeast?

If you have active dry yeast, you can still use it for this recipe. Just be sure to activate your yeast. Instant yeast does not require activation so that we can combine everything directly in a bowl. Active dry yeast does, so you’ll need to mix the sugar, water, and yeast in a bowl and allow for it to activate for at least 5-7 minutes or until you start to see it foaming at the top. The quantity of yeast you use will vary depending on how quickly you want to make naan. Here’s what you need to know: 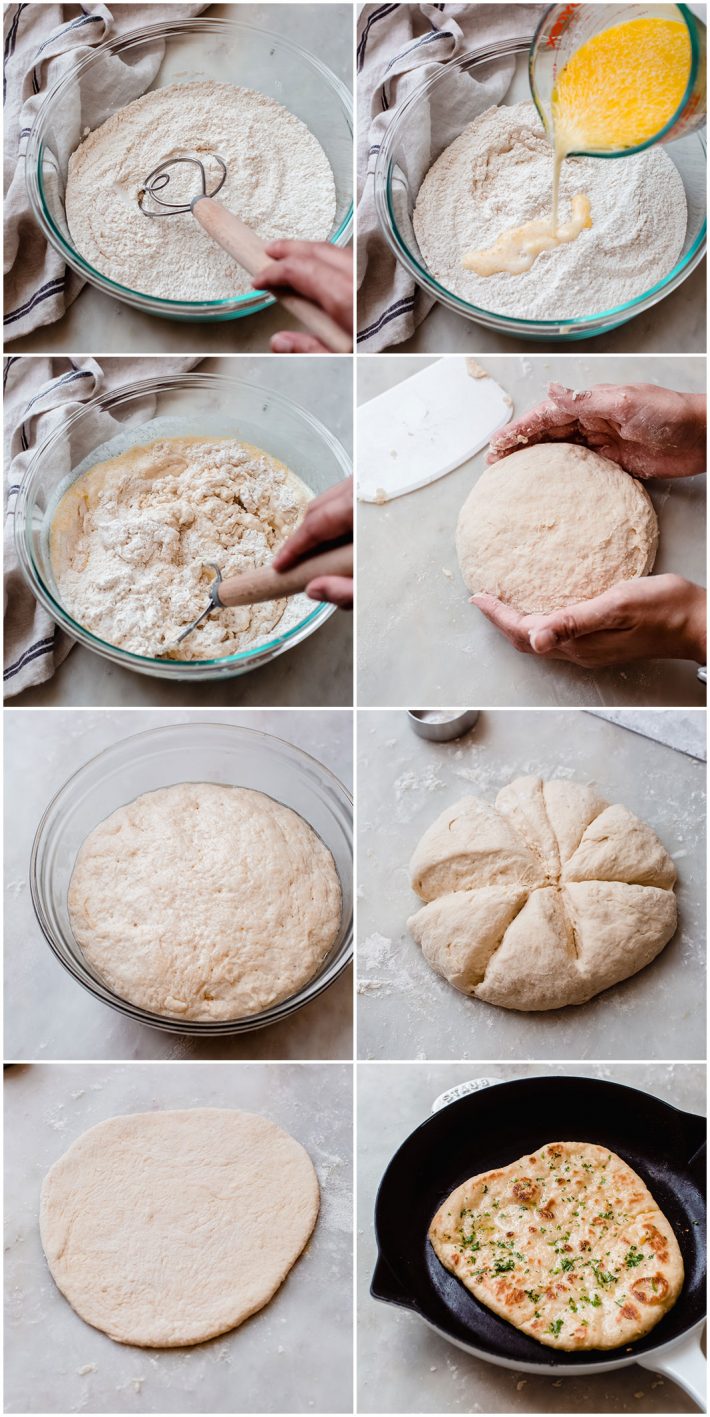 How to make the best homemade naan: 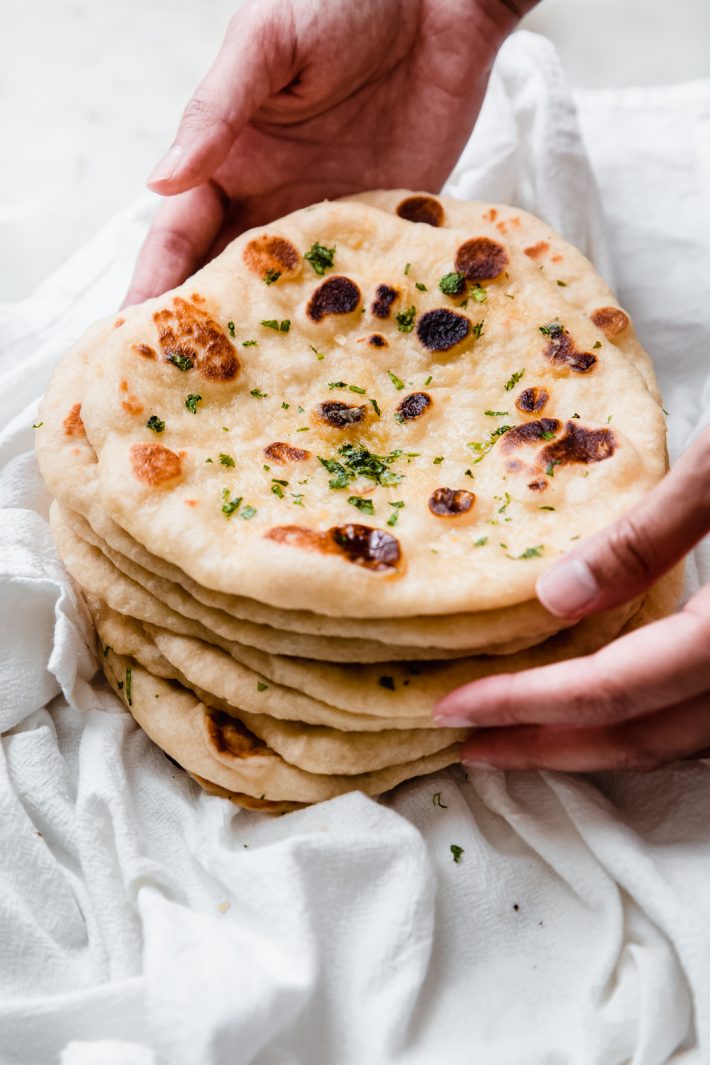 How to make garlic naan:

If you’re making garlic naan, I suggest mincing a couple of cloves of garlic into a small saucepan and adding a knob of cold butter in with the garlic. Allow it to heat over the lowest heat setting until the butter melts completely. This allows all that garlic flavor to infuse into the butter. I like to keep it on the stove on the low heat setting so I can brush the naans with the prepared butter right as I’m about to take them off the pan.

What if I don’t want garlic naan, can I use any other toppings?

You don’t have to brush fresh naan with melted garlic butter. Here are a few other ways of topping freshly made naan. 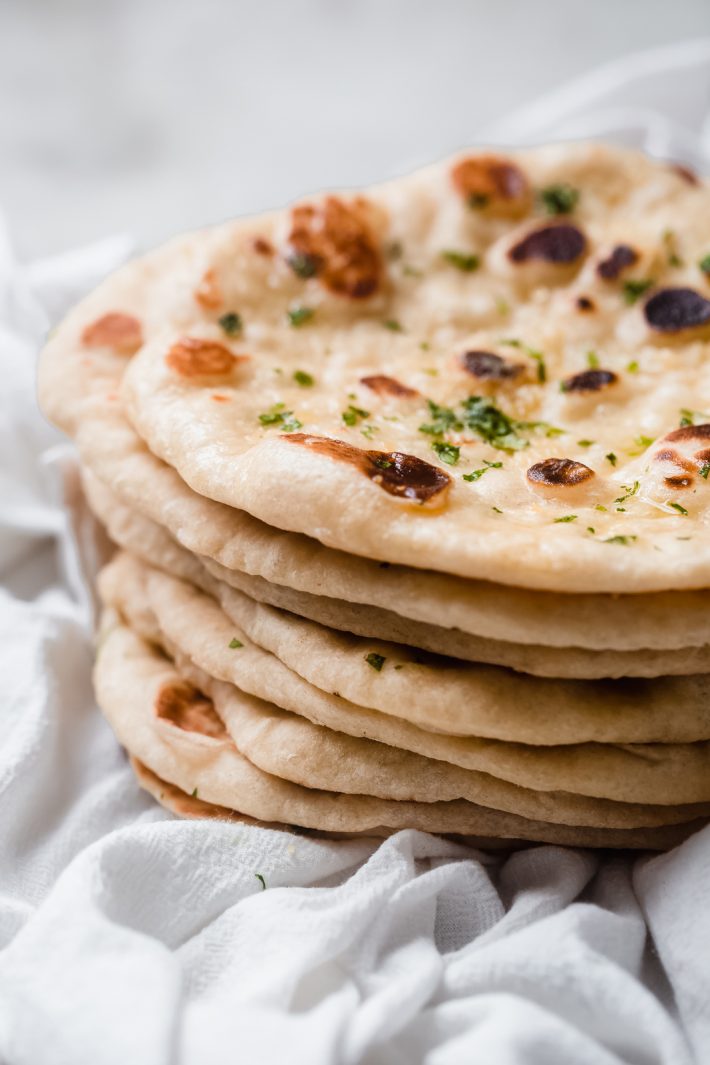 Can you store/freeze homemade naan?

YES! You can cook the naan, allow them to cool to room temperature, and then place them in an air-tight container or a zip-top bag and let them sit in the refrigerator for up to 4 days. When you want to reheat, just spritz with water and reheat them in a warm skillet over low heat until they heat through.

You can also freeze prepared naan. Just add them to a zip-top bag and freeze. You can freeze them for up to 4 months. Allow them to defrost in the refrigerator overnight or zap them in the microwave for 30-60 seconds at half power. Once they’re room temperature, you can reheat them with the same method listed above. 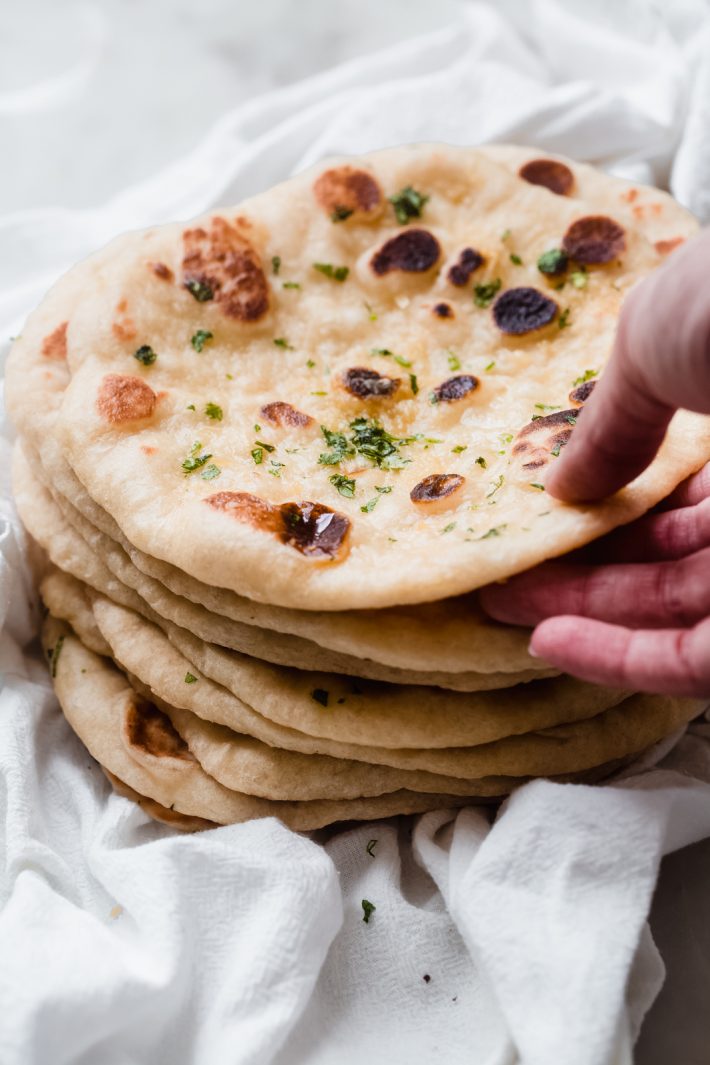 What do you suggest serving with homemade naan: 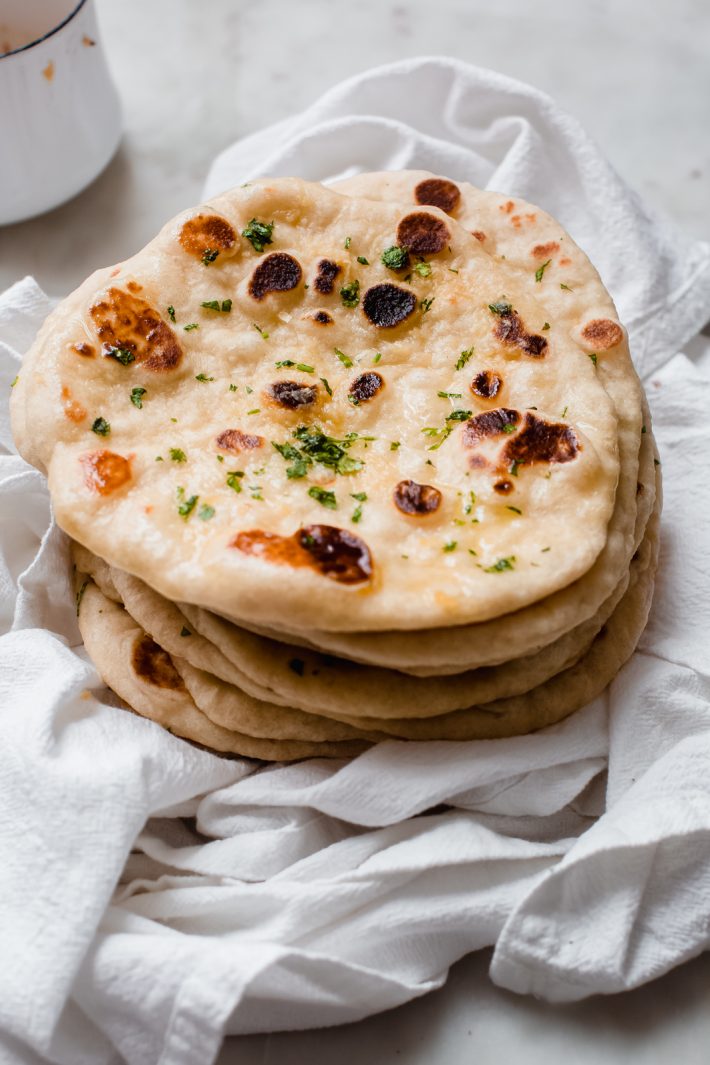 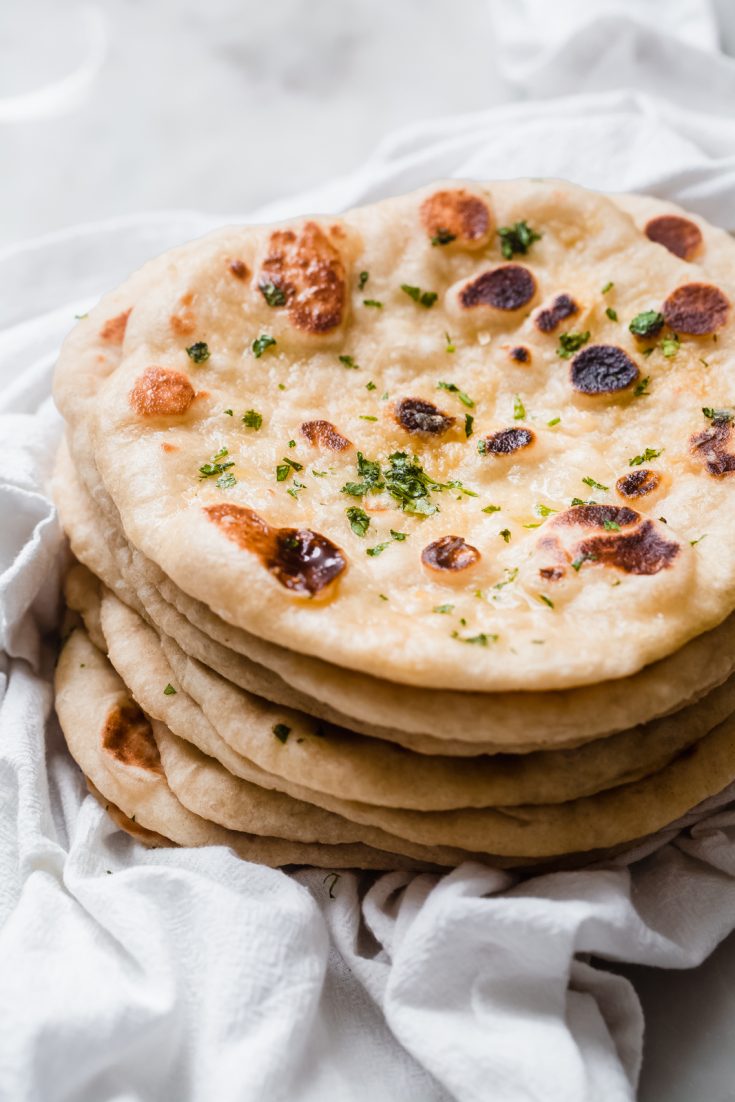 3 comments on “Homemade Naan (and Garlic Naan too!)”