Homemade Jalapeño Cheddar bread goes with just about anything! Serve it with homemade chili, grilled cheese sandwiches, or for breakfast with a side of eggs! 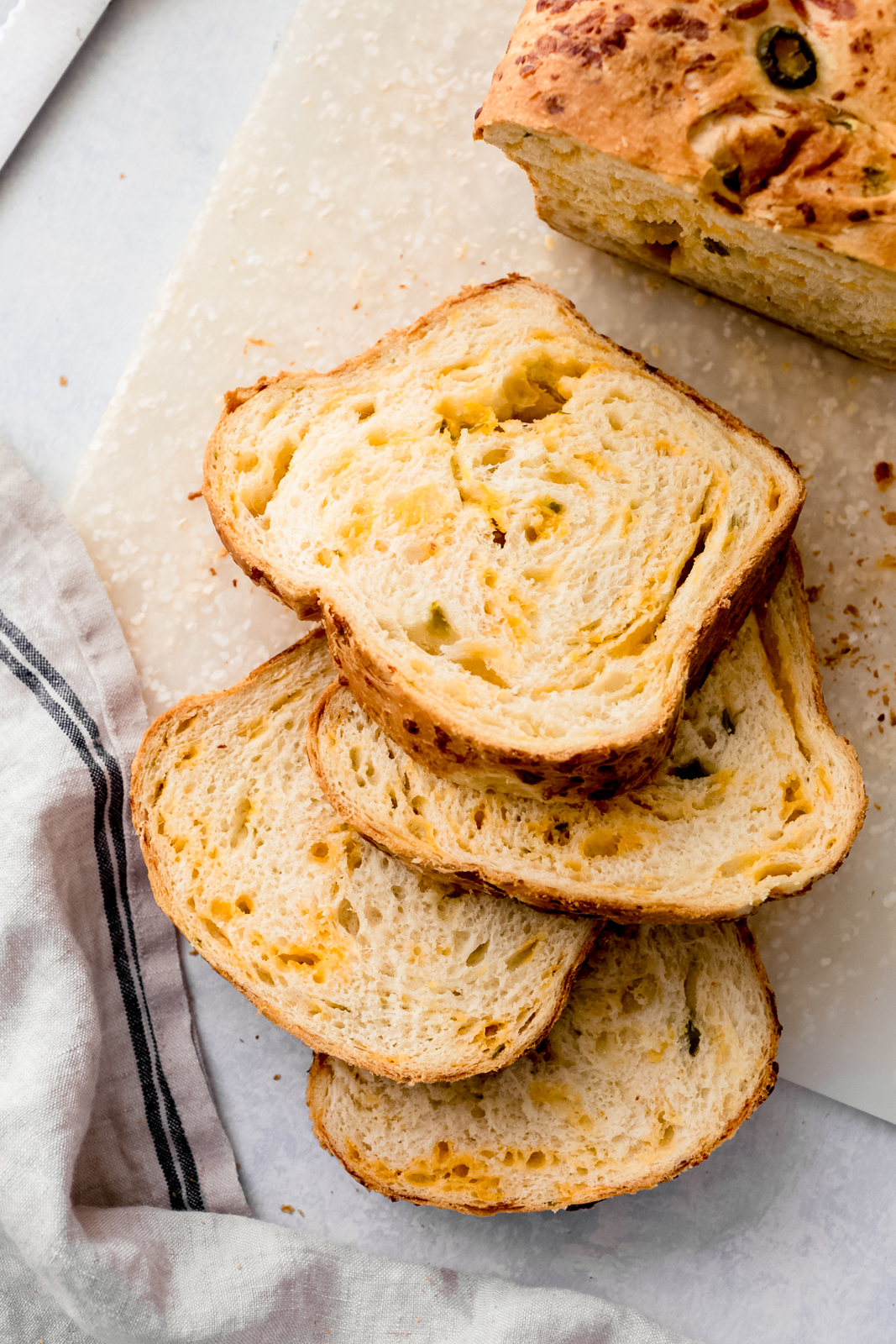 Gimme all the cheddar and load it up into homemade jalapeño cheddar bread for me, wouldja? Pillowy soft sandwich bread speckled with pickled jalapeños and cheddar cheese. Can you imagine the amazing grilled cheese sandwiches you can make with this? Holy moly, that would hands-down be the most amazing grilled cheese of life.

This jalapeño cheddar bread has cost me a lot. Not only have I made it more times than I’m willing to recount now, but it’s also left a huge dent on my wood floors. Once upon a chilly fall morning, my stand mixer got fed up and decided to commit suicide off my countertop, plummeting to what I assumed would be its untimely death, seconds away from spewing my then 4th batch of jalapeño cheddar bread dough.

As I said, this jalapeño cheddar bread has really put a dent on things. That’s not including the time and energy I put into making it again and again until it was absolutely perfect. And then once more just to be sure. The latch on my stand mixer has been compromised and even my contractor yelped a little when he saw the dent in the floor 😐 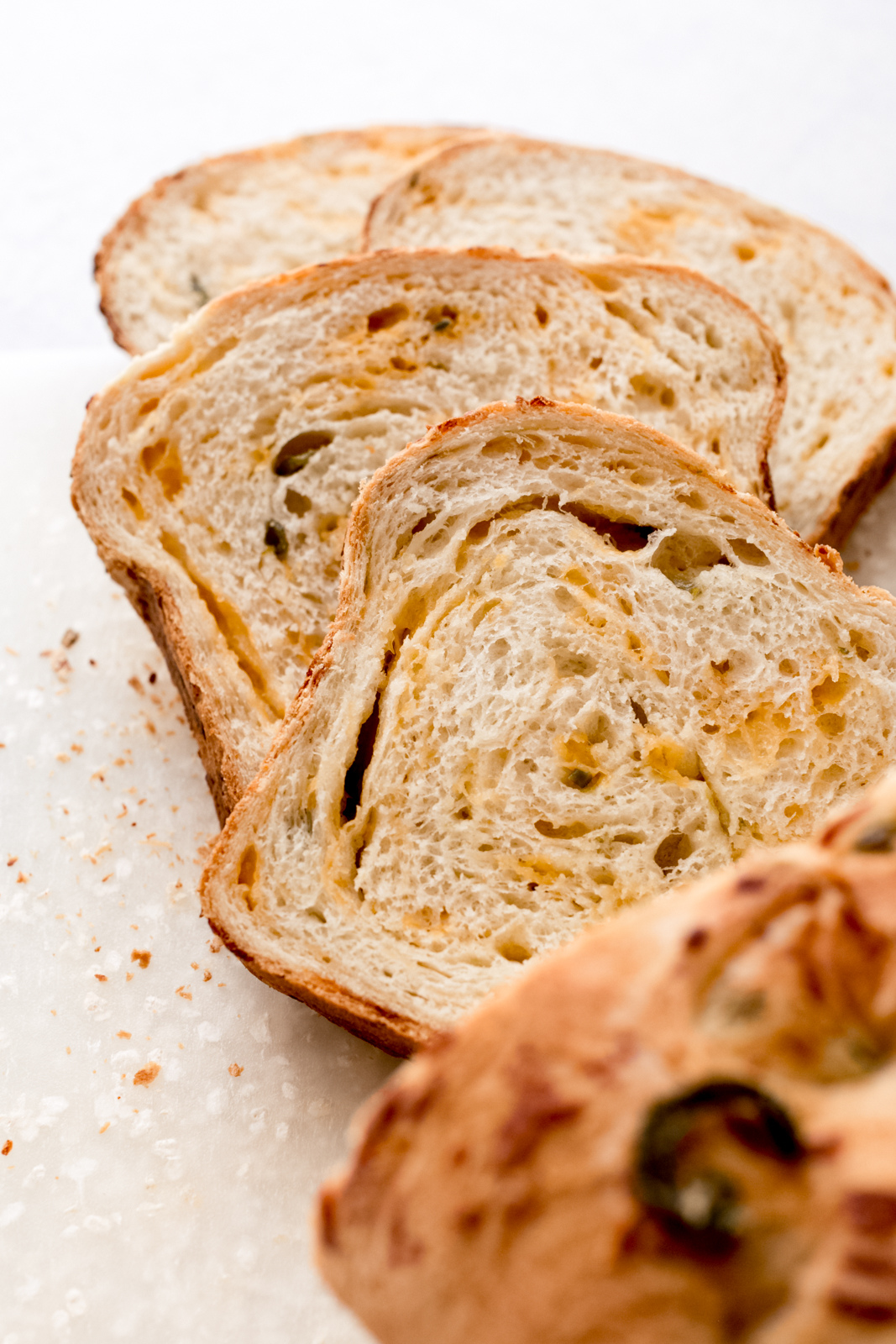 You know how positive people would take this kind of stuff and spin it into ‘character’ to a home and something about all the memories you made? Yeah, I’m not seeing it that way yet.

The mixer is still alive, I guess that’s something!

Moving along. I’ve made a ton of homemade bread in the past, on repeat. For the most part, it was my honey oatmeal bread which if you haven’t made it yet, you should. There was also the cinnamon swirl bread that became French toast one morning, and since then, every time I make French toast I dream about cinnamon swirls.

What I love about making homemade jalapeño cheddar bread is that it comes together rather quickly for a yeast bread recipe. In just a little over 3 hours, you’ve got perfect sandwich bread that’s good to eat warm from the oven. Keep in mind it’s like 15 minutes of hands-on time and everything else is just proof/bake time. 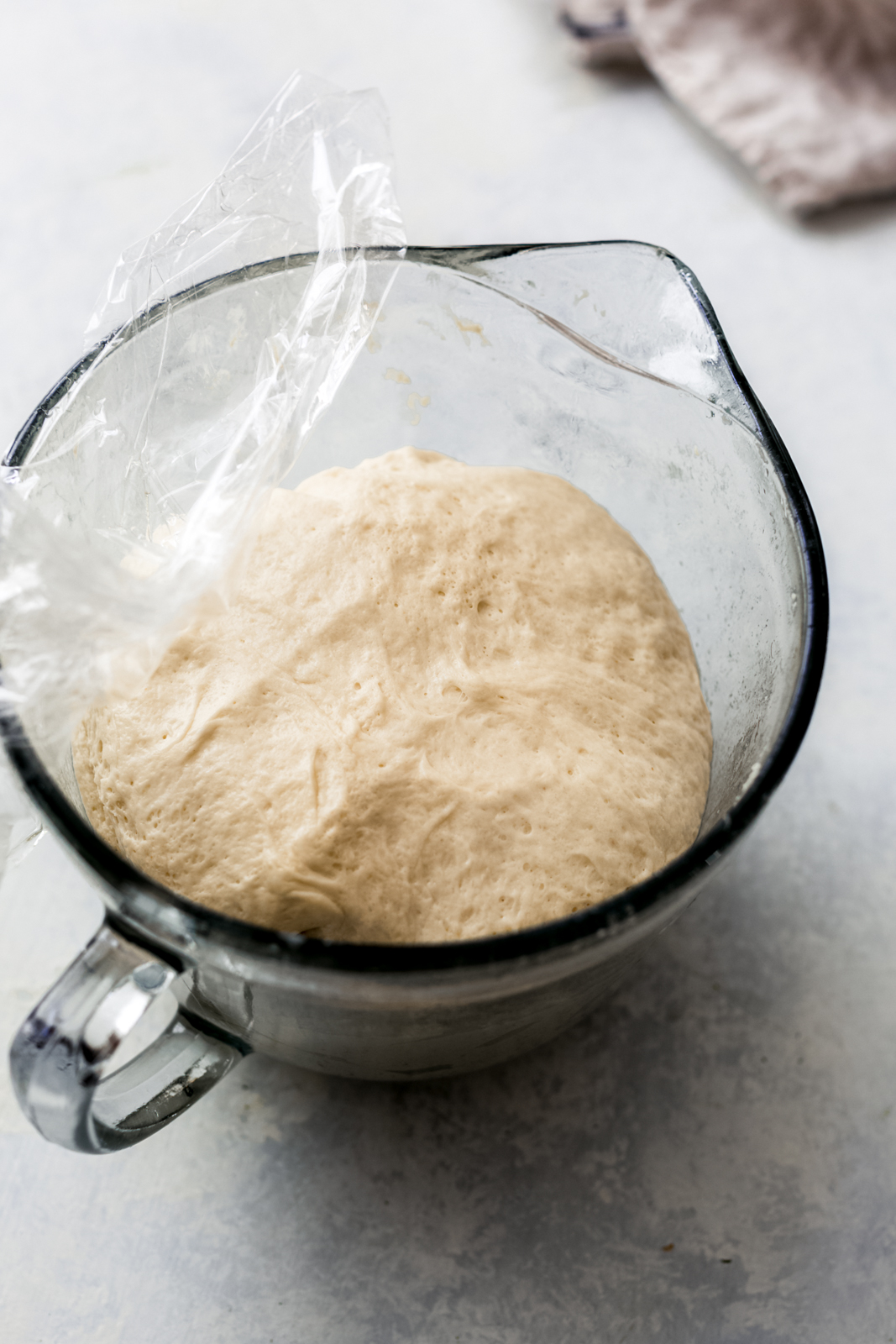 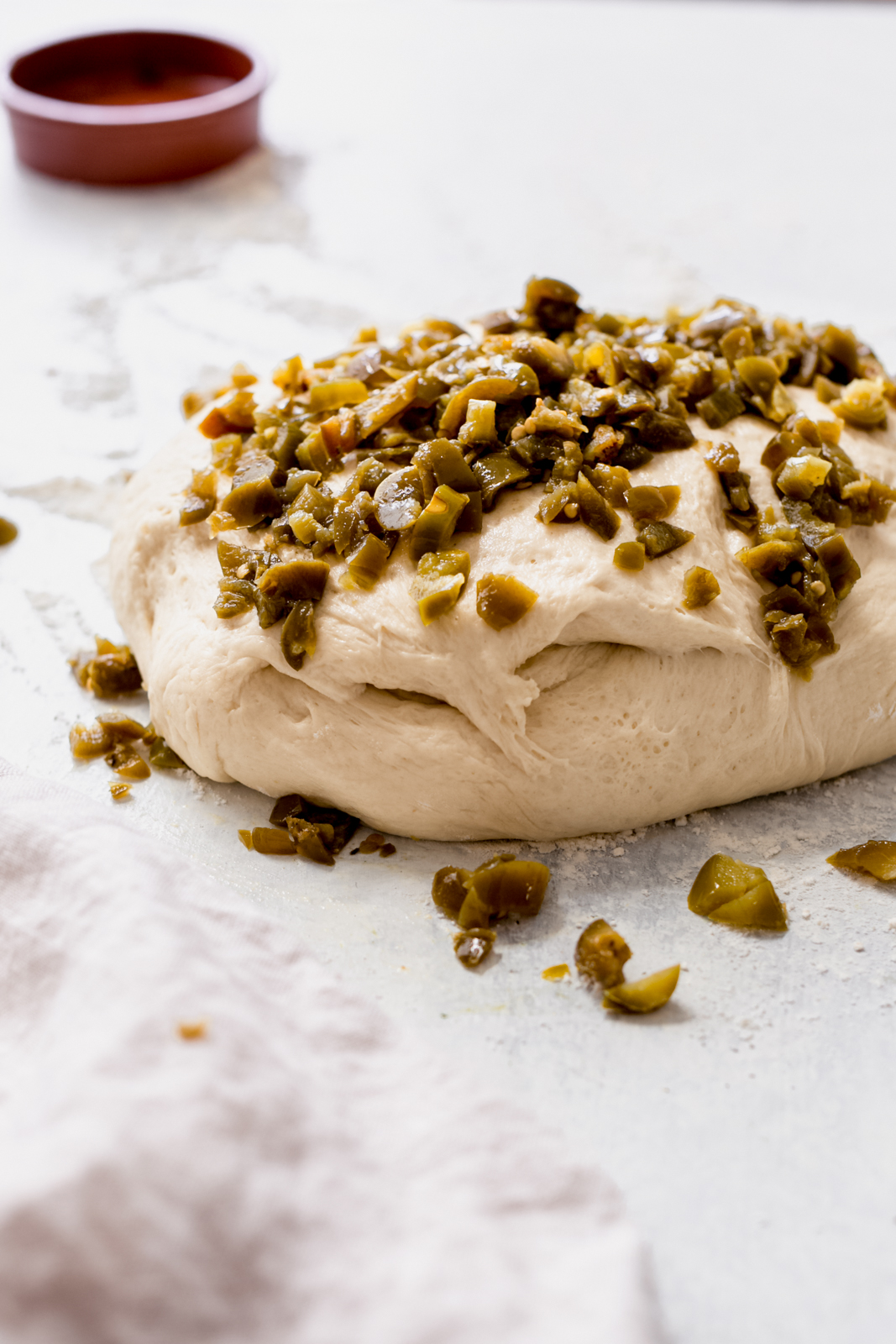 I can’t take all the credit for the harmonious combination of cheddar and jalapenos swirled into white sandwich bread though. In Texas, we have a local grocery store that makes jalapeño cheddar bread, and if you’re lucky enough to be shopping around the time they baked the days’ batch, you undoubtedly should grab a loaf before leaving.

What do you need to make jalapeño cheddar bread at home?

The ingredient list is super straightforward on this one. Most of these are probably already in your pantry, except the powdered milk.

Why do we add powdered milk?

Powdered milk is an ingredient I like to most (if not all) my homemade bread or dough recipes as it enhances the dough and gives it the most amazing bakery-like flavor. You won’t be able to tell it’s there but it certainly makes the bread a lot more soft and tender, which you will notice! It also gives the loaf a golden brown finishing on the outside so it’s picture perfect when it comes out of the oven.

Where can I find powdered milk in stores?

Powdered milk is usually found next to the sweetened condensed milk and evaporated milk in the baking aisle. 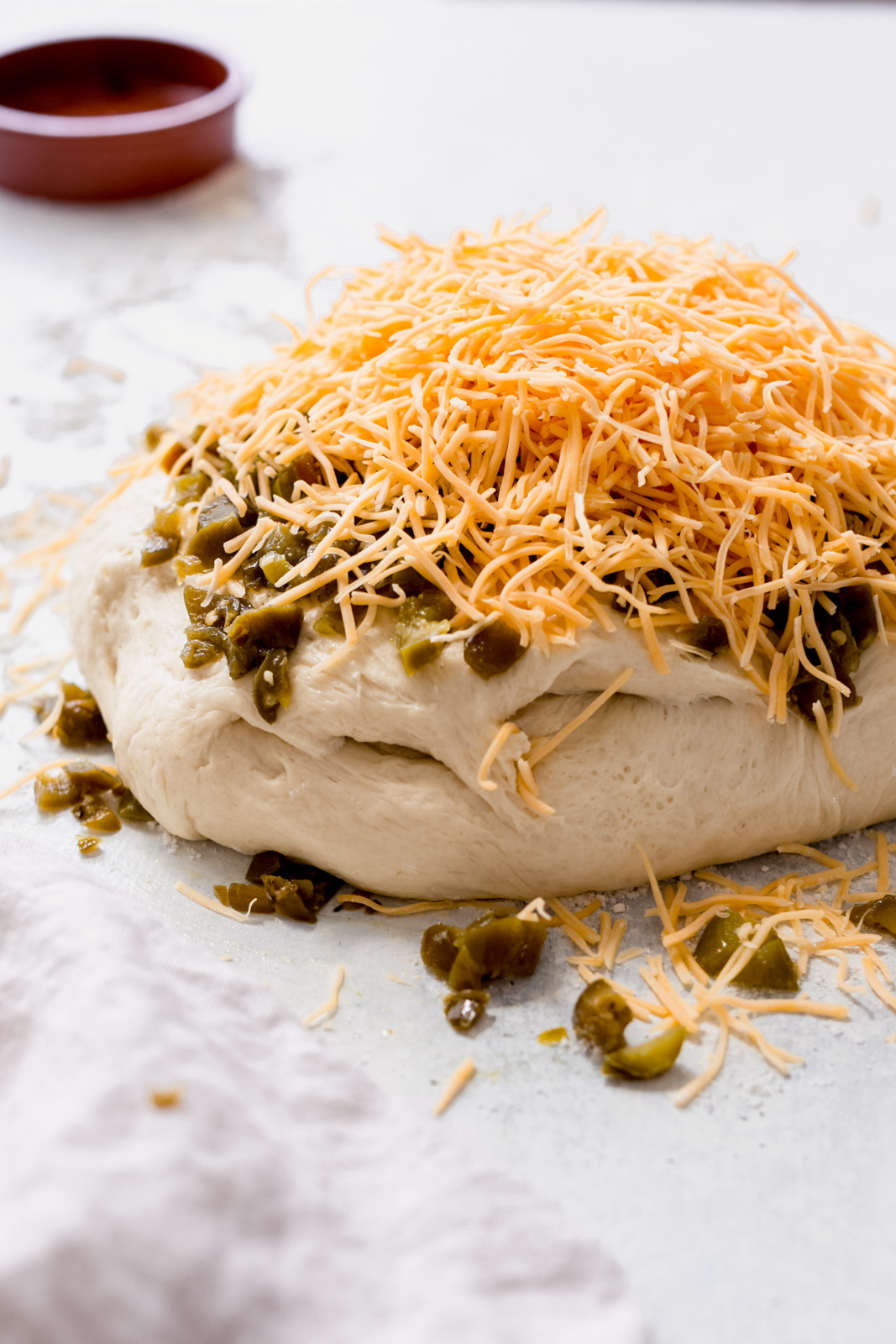 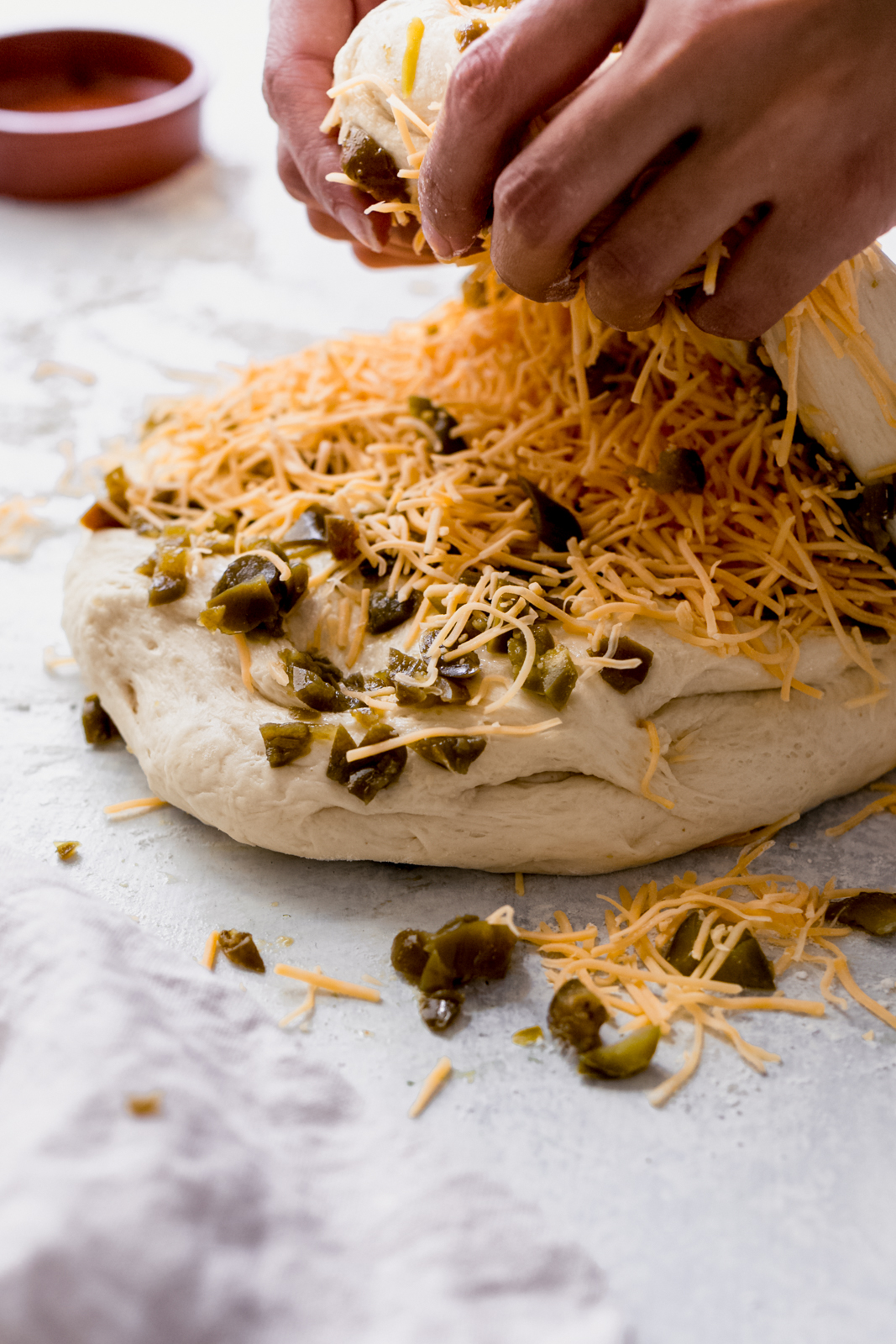 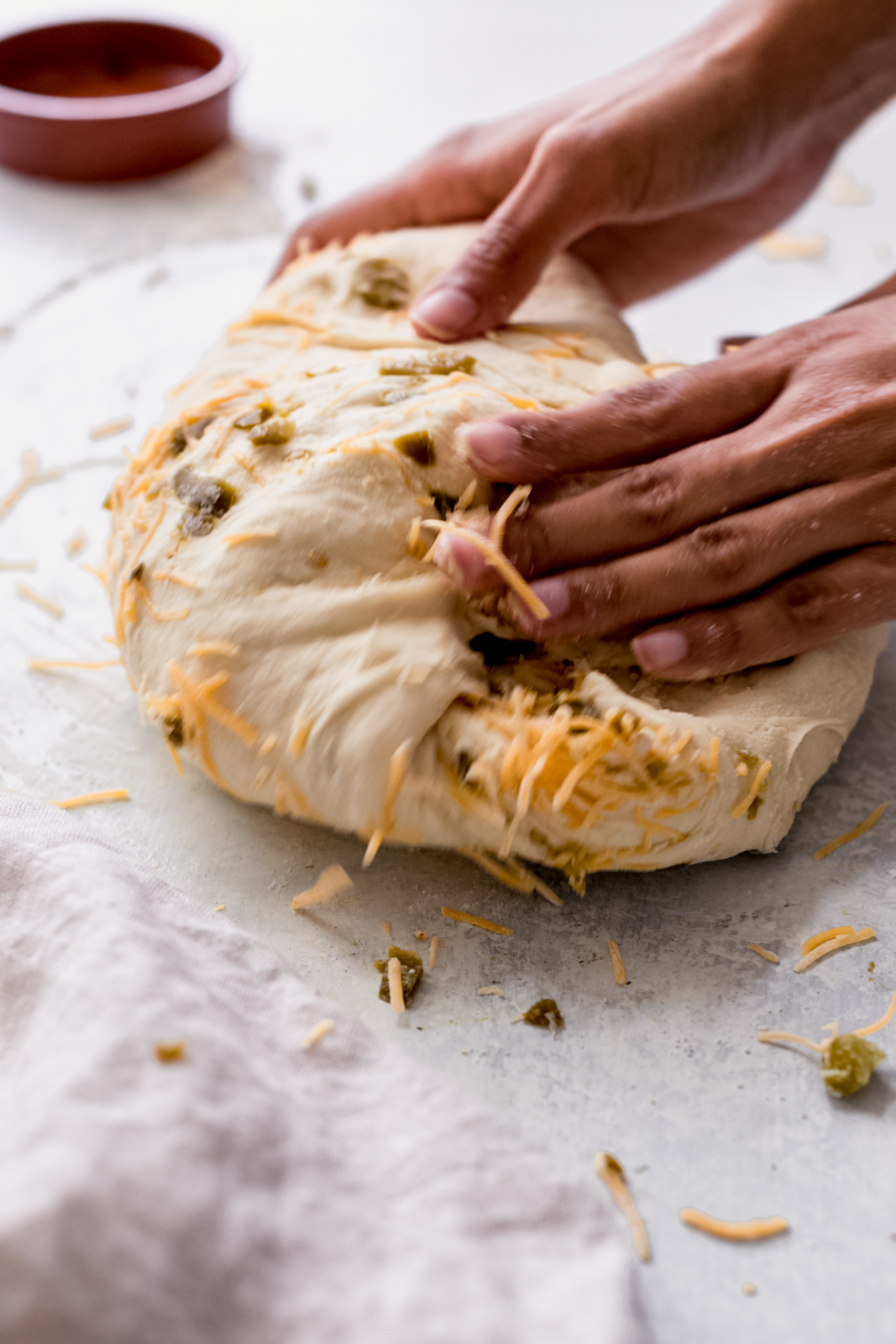 How do you measure the flour?

I find the best method of measuring out flour for jalapeno cheddar bread is the ‘spoon and sweep method.’ Use a smaller measuring scoop or cup to spoon flour into a 1-cup measure. Then use a knife and sweep from one side of the measuring cup to the other to level it off. Do this 4 times to make a total of 4 cups.

What kind of pickled jalapeños can I use?

I used regular old pickled jalapeños found in the dressing and pickles section of any and all grocery stores. If you don’t want the bread to be too spicy, I suggest looking for a jar that specifically states ‘tamed’ or mild jalapeños. I used a few different brands while making this bread and though I did enjoy the spicy jalapeño bread, my favorite was when I used tamed or mild jalapeños.

What kind of cheddar cheese do I need?

I like to use yellow cheddar cheese. It’s up to you whether you’d like to use mild, medium, or sharp cheddar. Again, I tried a variety here just to be sure and my favorites were the mild and medium cheddar for this recipe. 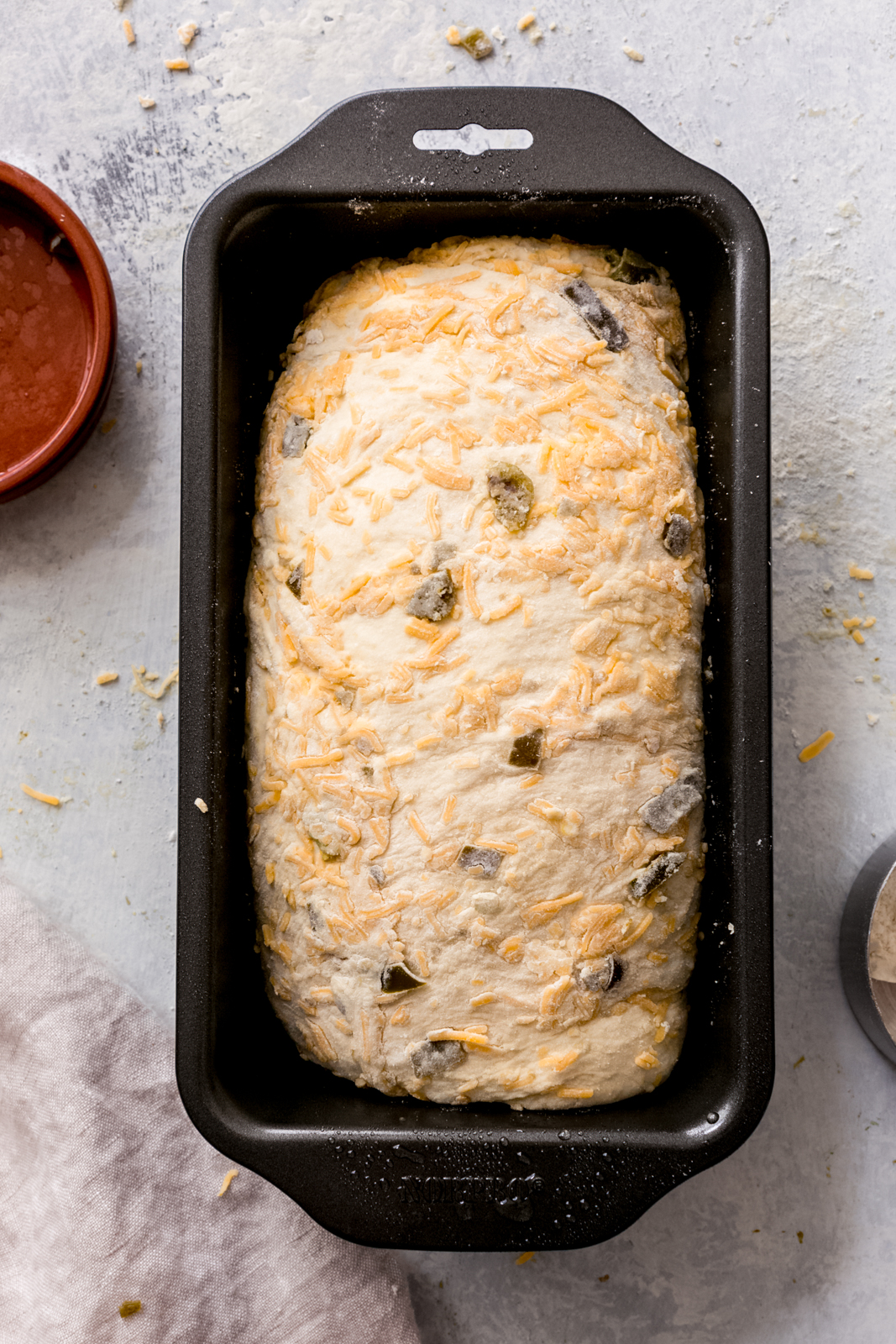 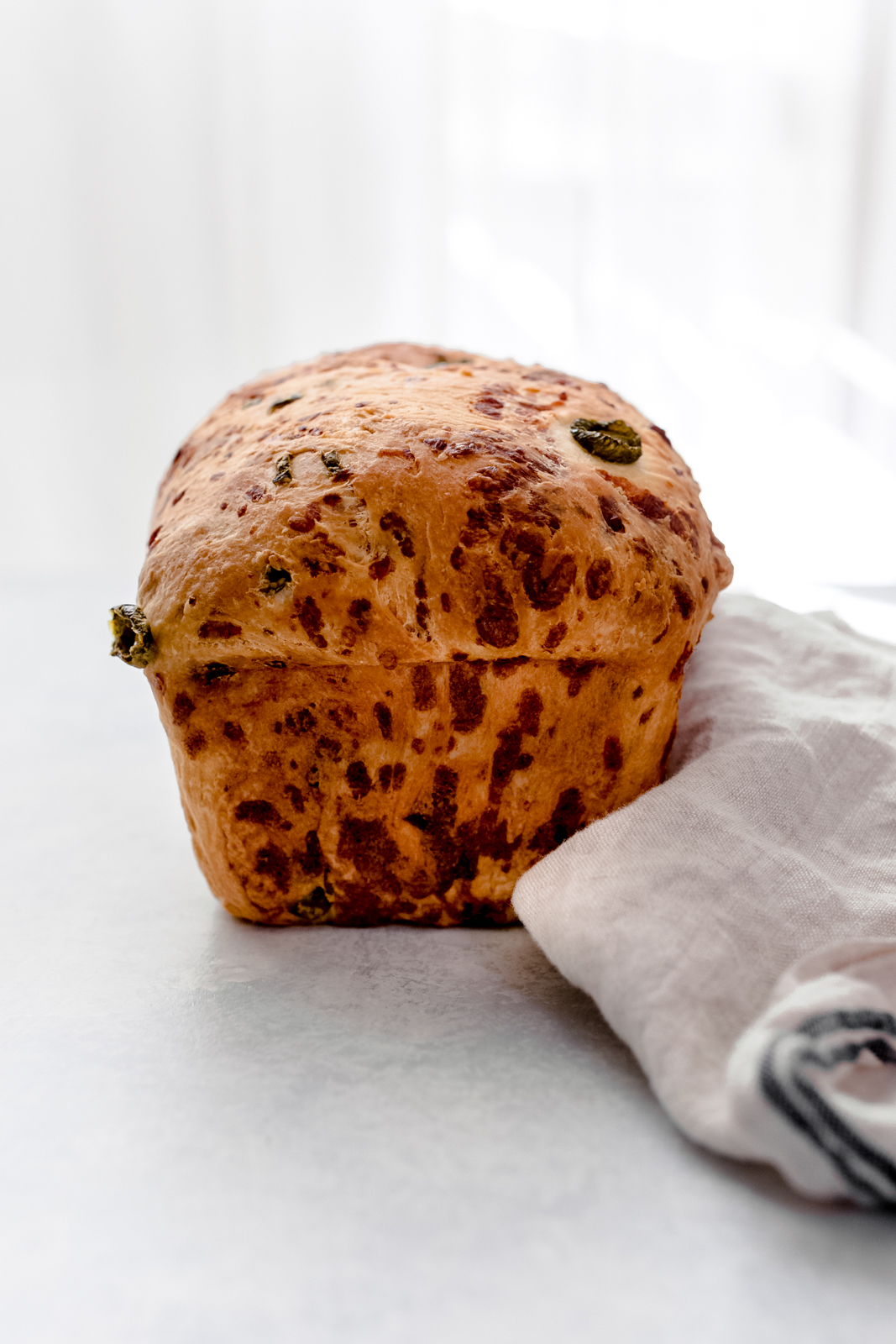 What can I use jalapeno cheddar bread for?

How to make the best jalapeno cheddar bread: 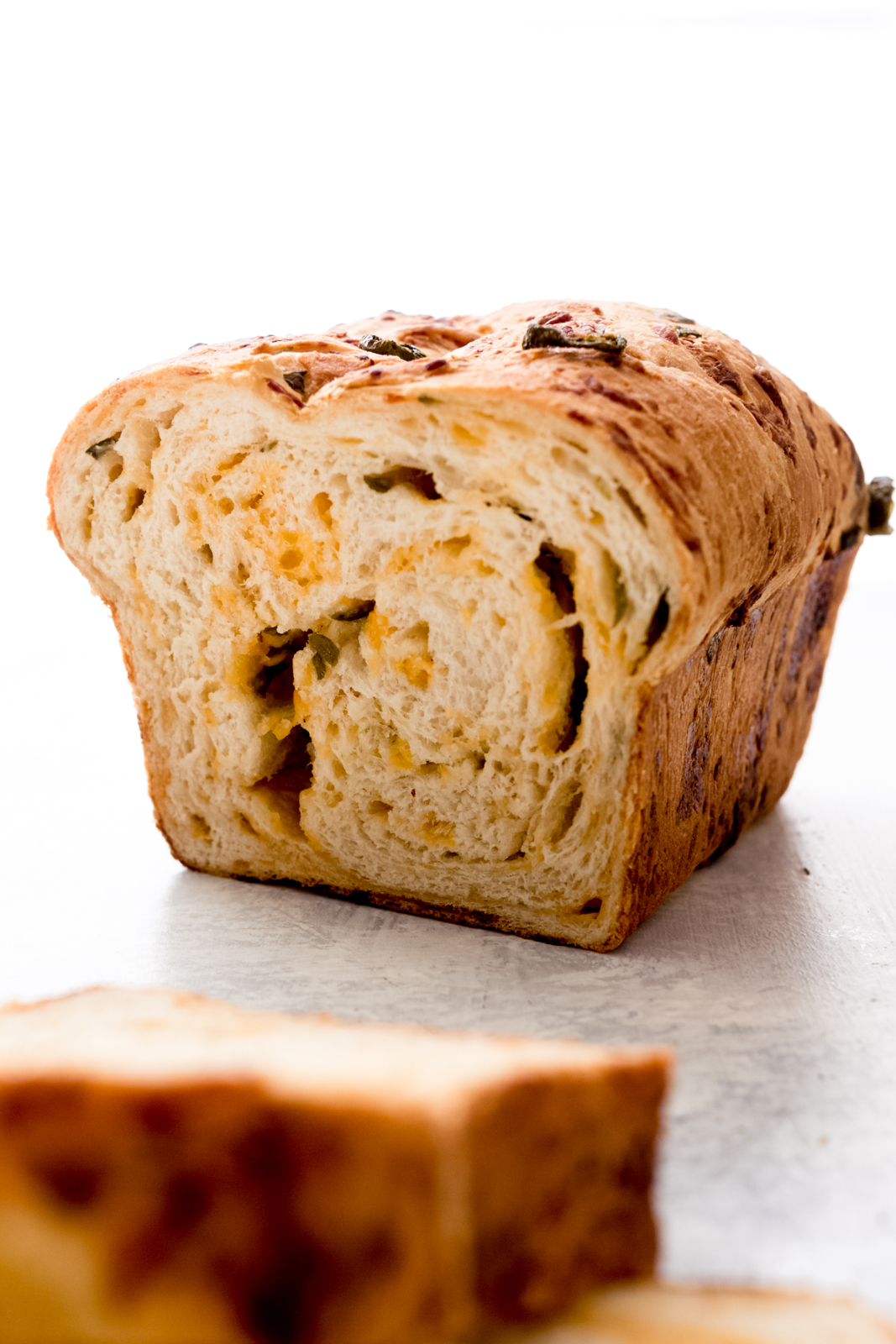 Can you freeze the leftover bread?

Yes, you can freeze it! Just wrap it well in wax paper and then pop it in whole or in slices into a zip-top bag and it should last for a couple of months, easily.

Honestly, you need a loaf of warm jalapeno cheddar bread in your life at all times. It’s warm and it goes with just about anything, and if you’re a carb freak like me, this loaf isn’t going to last long around your neck of the woods either! 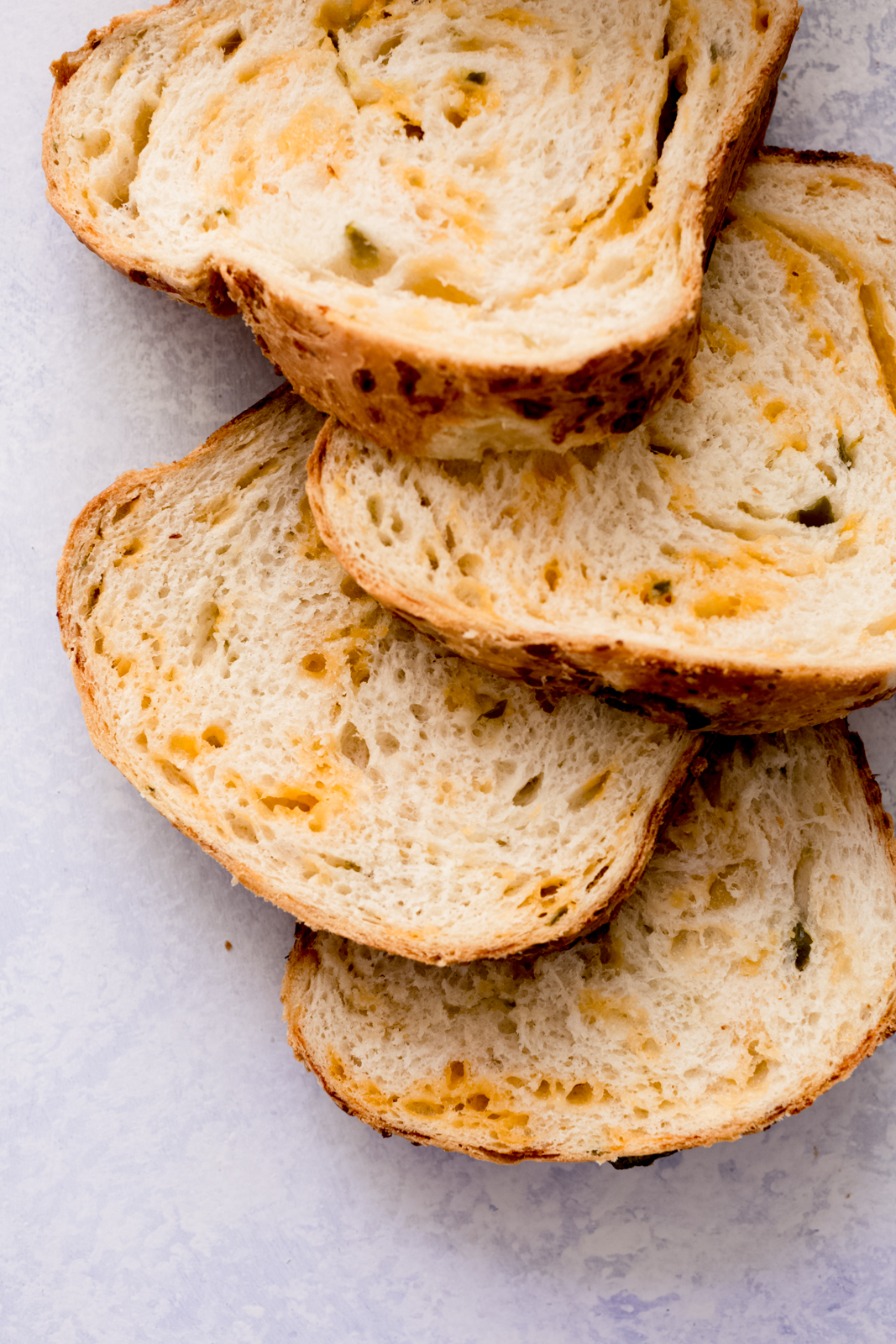 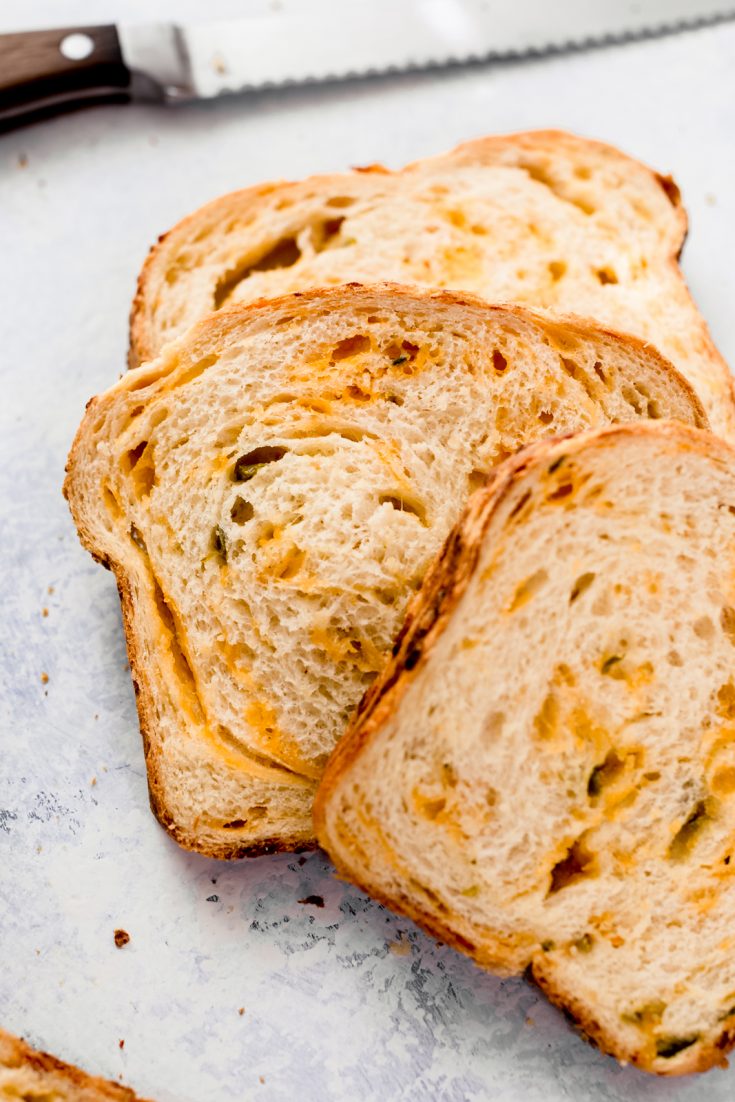