Learn how to make a cinnamon swirl bread. This bread is tender and sweet and swirled with a buttery cinnamon sugar swirl. You can even sprinkle in some raisins or chocolate chips if you like! Then, use the leftover bread for French toast! 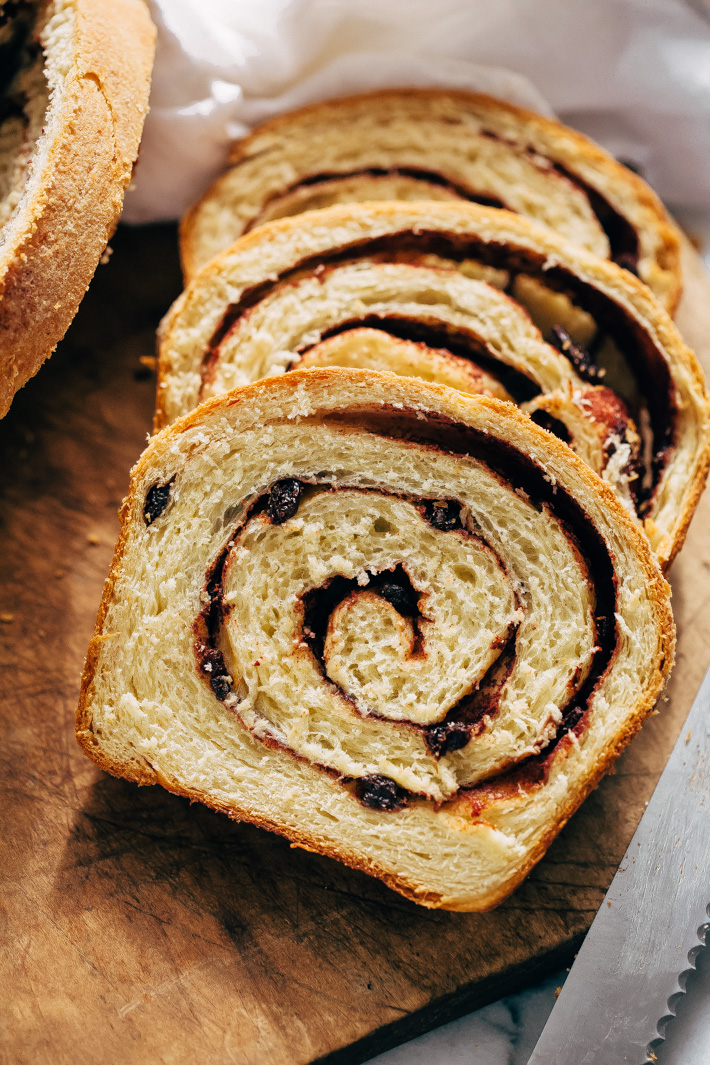 Tender white bread with swirls of buttery cinnamon sugar, speckled with raisins. Entirely made from scratch and so mouthwatering. As a bonus, the whole house smells like fall — no scented candle here.

You guys know I’m on a baking kick lately, and cinnamon swirl bread is just the newest recipe in my arsenal of baked goods. As with most of my baked bread, I sneak in some instant mashed potato flakes to gives this cinnamon bread a whole new level of tenderness. I kid you not, 12 slices of this stuff disappeared in a matter of 48 hours, and I’m itching to get back in the kitchen because I still. want. more. 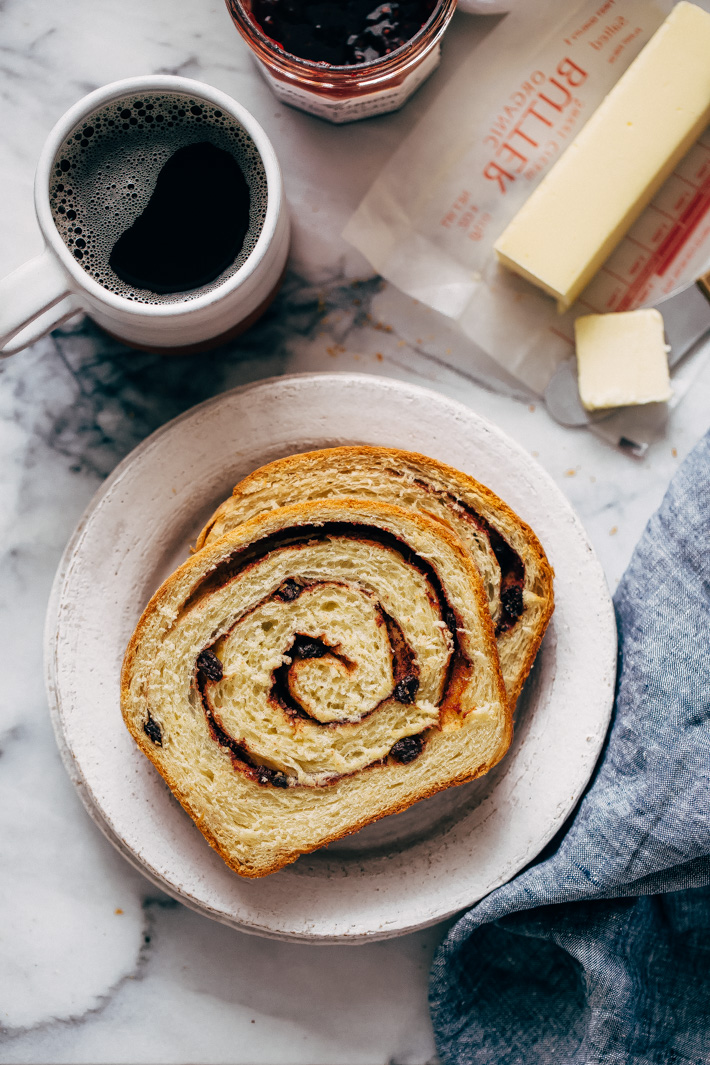 I came across a cinnamon bread recipe from the pioneer woman when I was researching where to start. I tested her method but found that though it was delicious, it was missing a little bit of that flavor and texture I was aiming for.  So I decided to go back to my old trick. Ever since I made my basic one-hour dinner rolls, I’ve been sneaking instant mashed potato flakes into all the bread I make. They add so much tenderness that I honestly don’t see myself ever turning away from this unique ingredient. And if you’re worried about the taste, don’t. You can’t even tell it’s there. They just add a luxuriously sweet and creamy texture to the cinnamon swirl bread, one that was unquestionably lacking when I tested the recipe without it.

I know, making bread can be a bit intimidating. I’ll be the first one to tell you I was deathly afraid a few years back. Never in a million years did I think I’d be testing and sharing cinnamon swirl bread with you. If you’re new to bread making, I have three helpful suggestions for you.

1.) read the instructions through at least twice before starting. That way you know exactly what comes next in the recipe. 2.) have all your ingredients ready to go before you get started. Trust me; things go a lot smoother when you aren’t trying to open the refrigerator door with dough all over your hands! 3.) be patient don’t let the process of doughmaking frustrate you. Put on a little relaxing music in the background, make yourself a cup of coffee or tea before you start and just let the bread making process consume you. 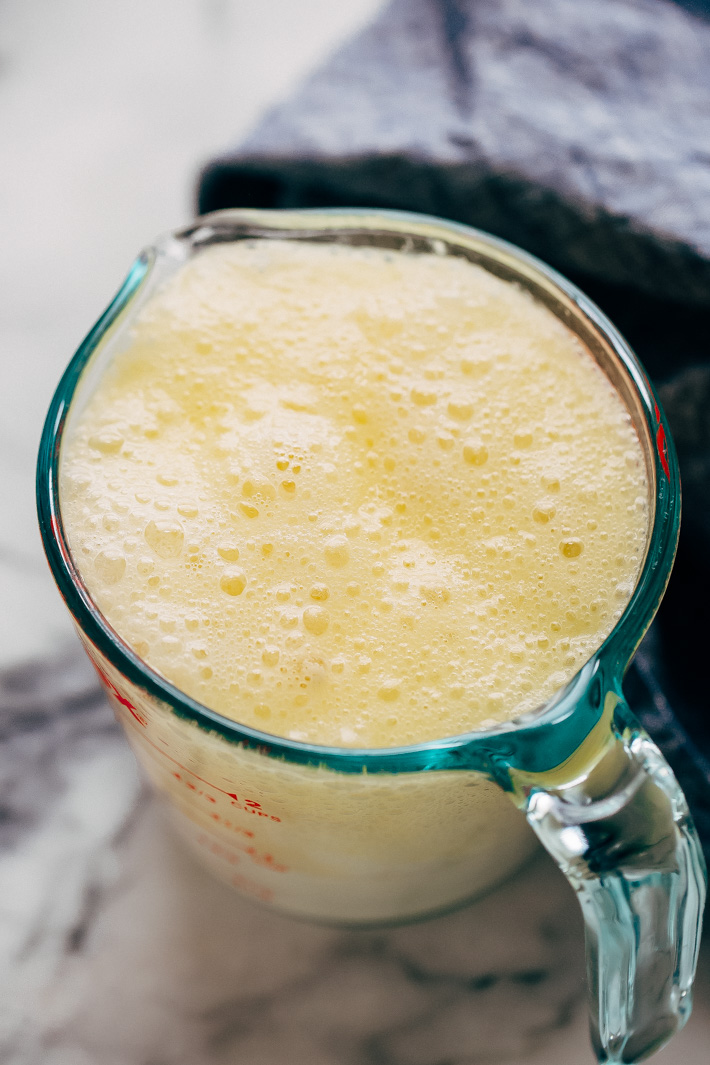 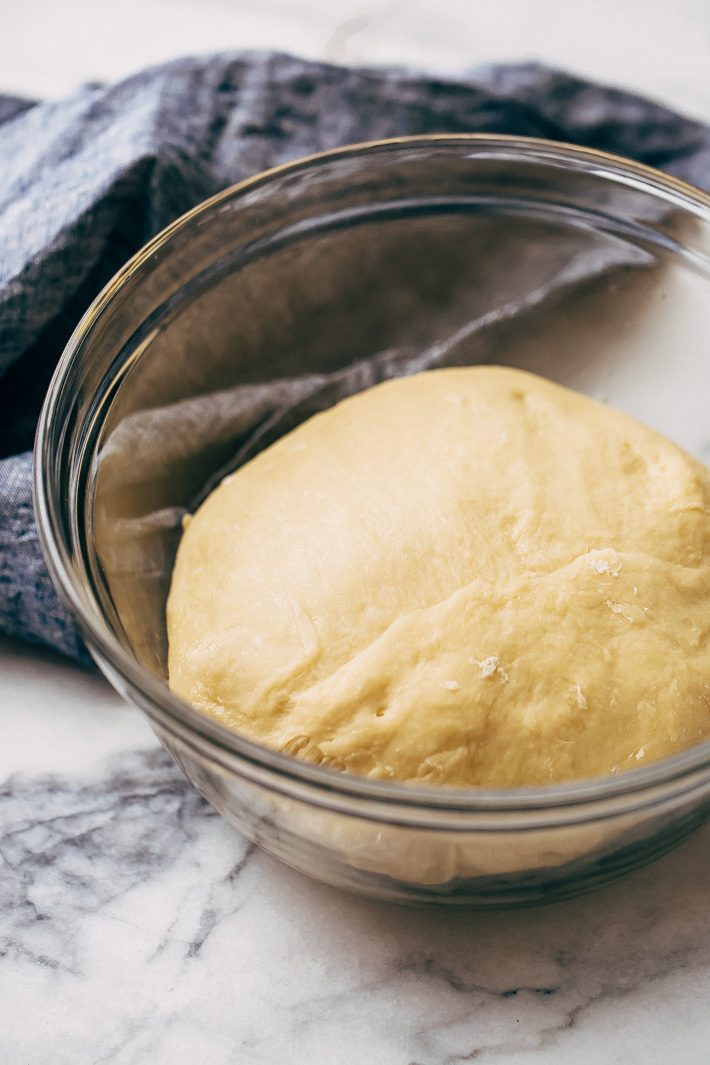 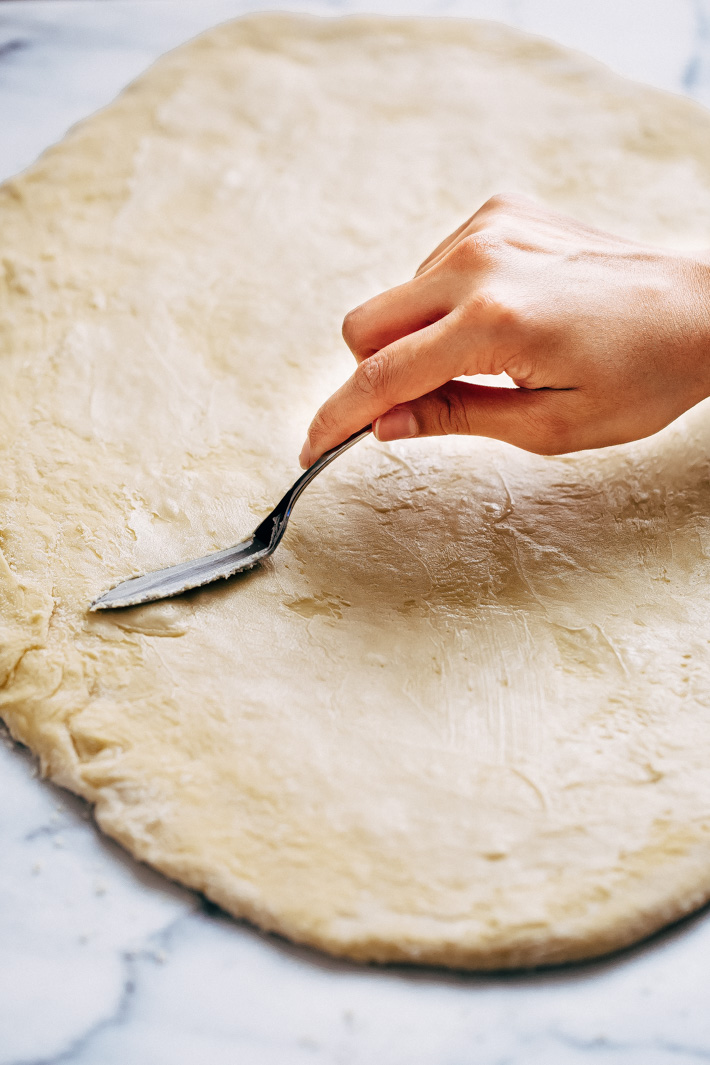 I want to be sure you’re comfortable with breadmaking by the end of this post, so I’m sharing a ton of extra pictures and information on the cinnamon swirl bread today.

First, let’s talk about the yeast starter. Just like the starter we made for our rosemary focaccia bread, we’re going to give the yeast about 15 minutes to bloom. To start, we’ll melt the butter for 15 seconds or until it’s completely liquified. Then, pour in the milk and sugar and heat it till it’s lukewarm (about 105-110ºF). Sprinkle with the yeast and stir to combine. Next, just let it hang out for a bit. If your yeast isn’t bubbling and foamy after that much time, it’s one of two things: 1.) your liquids weren’t at the correct temperature or 2.) your yeast is expired.

Then, we’ll just combine everything in a stand-mixer (affiliate link) and let the machine knead the dough for roughly ten minutes. Once the dough for our cinnamon swirl bread dough comes together, allow it to rest for at least an hour or until it doubles in size. I always do this in my dryer. Yes, the kind I dry my clothes in. Just let the dryer heat up for about 5 minutes, turn it off, place your bowl inside and don’t open the door for an hour. It always does the trick, even in the dead of winter, your bread will RISE.

Then we’ll roll the dough out into a large rectangle, about 9 x 24 so that we can spread on softened butter, sprinkle the bread with cinnamon sugar and dot it with raisins. Of course, you can swap the raisins for butterscotch chips or chocolate chips if that’s more your thing.

Make this cinnamon swirl bread how you like it! 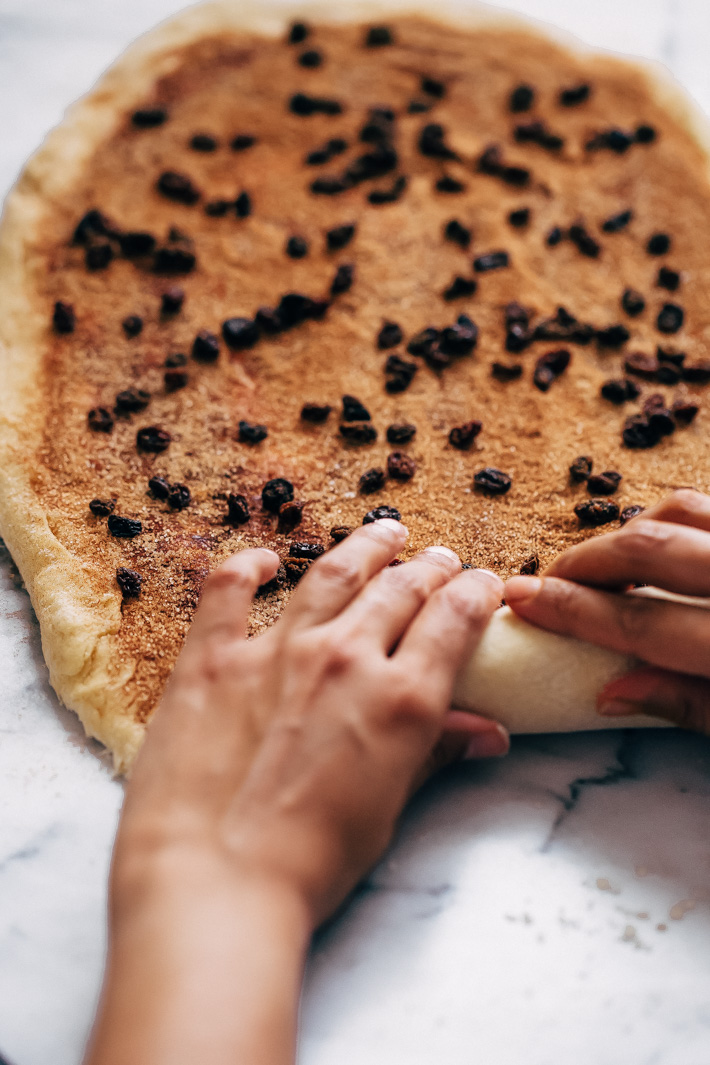 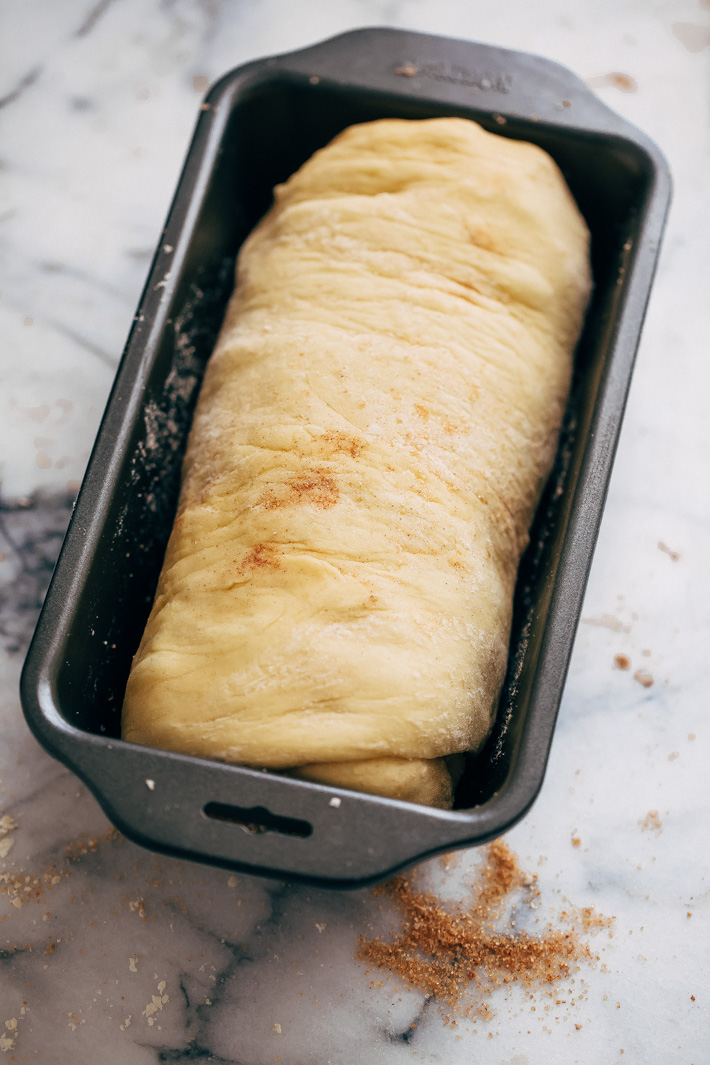 Next, we’ll roll up the bread. Take your time in doing this, you don’t want to roll it too loose, or you’ll have large holes in the bread. You want to be gentle yet firm when you’re rolling. Using both hands, lift and place it in a greased 9×5 loaf pan (affiliate link).

Now we’ll let the dough rise a second time before moving forward and baking the bread. 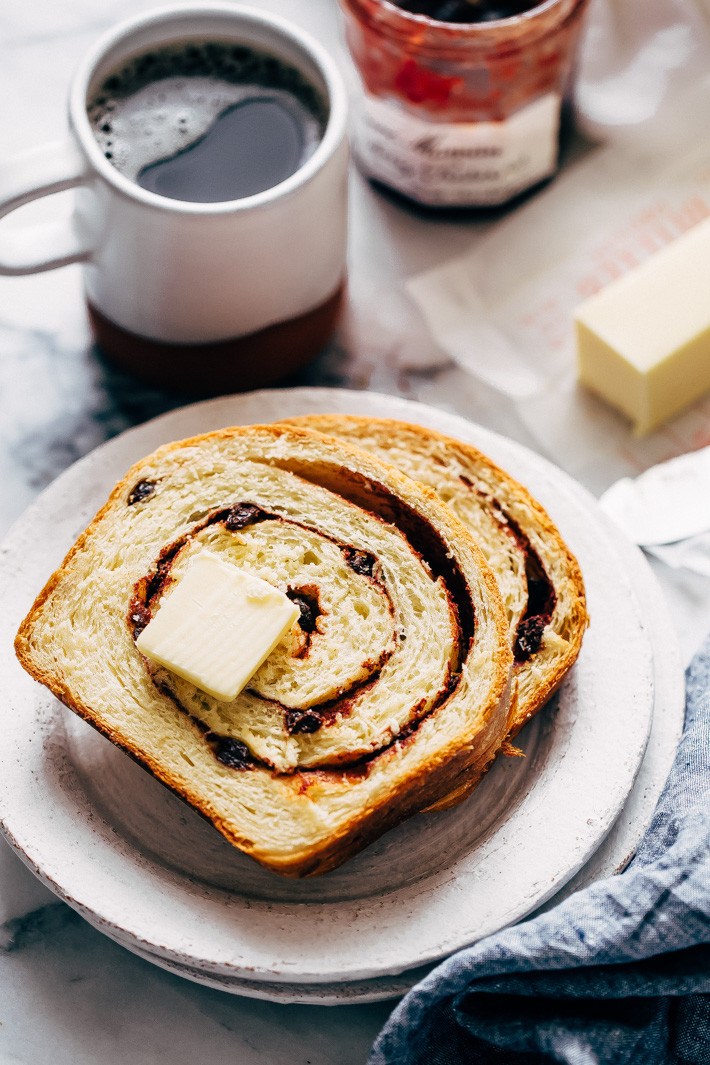 Okay, I know that was a long post, but I just wanted to cram as much information as I could to help set you up for tons of success when you make a batch of homemade cinnamon swirl bread.

I serve this simply with a little butter the first day and then turned my leftover cinnamon swirl bread into french toast. 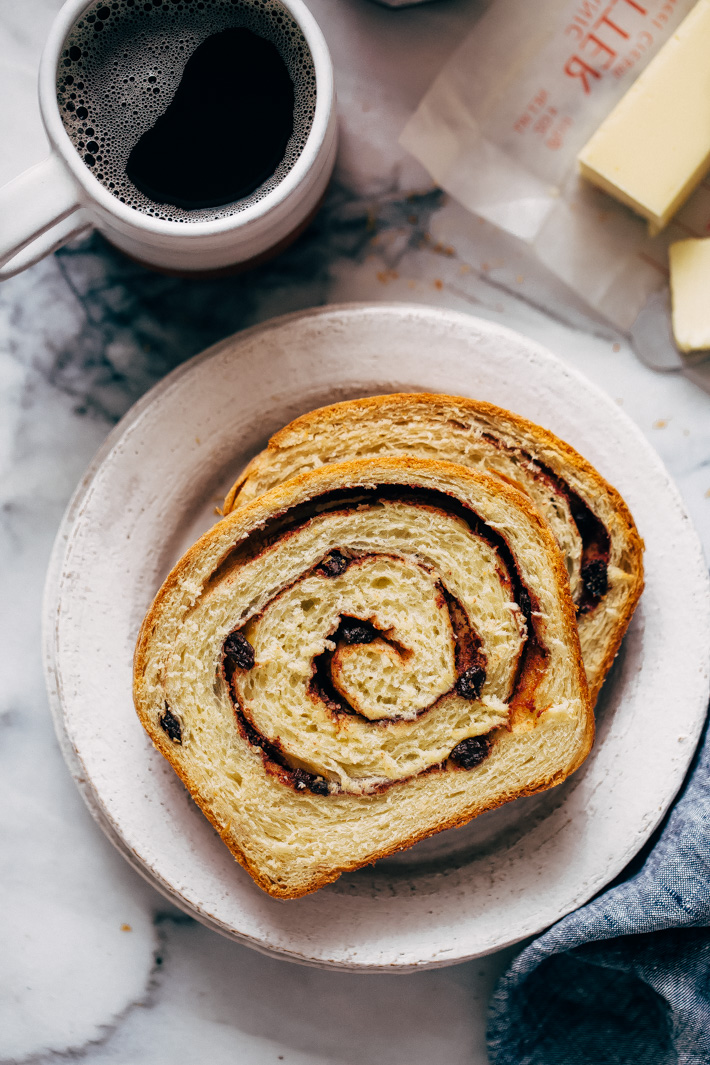