These homemade 1 hour cinnamon rolls with knock your socks off! Layers of tender cinnamon roll dough swirled with cinnamon sugar and topped with a cream cheese icing. They taste just like Cinnabon – maybe better!

Cinnamon rolls in 1 hour and they taste like Cinnabon!

The only way I know how to describe these swirled rolls are that they are dangerous and deadly. For someone that loves making a big deal out of weekend breakfast, without a whole lot of work, these are perfect. You don’t have to wait around for them to proof for hours on end. Sure, you could reach for dough that comes in a can, but homemade cinnamon rolls with cream cheese frosting are undoubtedly better.

Perfectly swirled with cinnamon sugar and rolled up in hot buttery dough, and if that wasn’t enough, there’s a tangy, sweet cream cheese icing that just melts down the sides of these hot rolls.

I’ve made countless trays of cinnamon rolls since sharing the recipe a few years ago and I kid you not, I always have to call everyone I know to come take them off my hands because I can’t be trusted around them!

What do you need to make 1 hour cinnamon rolls dough?

How to make the perfect 1 hour cinnamon rolls:

The dough for homemade cinnamon rolls is very easy to make. We’re using instant yeast, so that means you don’t have to sit there and wait for the yeast to activate. We’re also not spending hours allowing the dough to rise.

Add the dry ingredients to the bowl of a stand mixer and allow for it to combine. Be sure to do this step so you don’t end up with lumps of powdered milk. You want to mix it thoroughly, then add in warm milk, melted and cooled butter, and the eggs. Let the mixer run for several minutes until the dough comes together. That’s it!

What if I only have active dry yeast, can I still make your homemade cinnamon rolls recipe?

You can use active dry yeast to make these cinnamon rolls. You’ll just want to keep a couple things in mind:

Because I didn’t think I could make it any better until I changed the baking temperature on my chocolate chip cookies and learned how even a small 25º temperature change can activate the Maillard reaction.

Maillard reaction: is a reaction that occurs between sugar and a protein resulting in browning. Because it occurs at 356ºF, baking the rolls at 350ºF would technically never take them to their full potential because the sugars won’t caramelize. When sugar caramelizes you’re left with a golden brown hue and a more flavorful end product.

Let’s talk about the cream cheese icing for cinnamon rolls:

I played with the cream cheese icing quite a bit before settling on the recipe I’m sharing with you today. I used the traditional ratio of cream cheese, butter, powdered sugar, milk, and vanilla and no matter how much I played with it, I couldn’t get it to have that tang I love.

And then I tried… lemon juice.

Now, let me just say, if you don’t like things that have buttermilk or a tang to them, you might not like my icing. And you can certainly replace the lemon juice with additional milk, but if you’re into a more balanced approach to cinnamon rolls, a little tang helps cut through some of the sweetness and complements all the other flavors.

Do you have to use cream cheese icing on homemade cinnamon rolls?

This is totally your call. A lot of people prefer a simple icing made with powdered sugar, milk, and/or water. And you can certainly do that if you’d like. I prefer to have the tang and depth of cream cheese frosting and I could never make these without it. 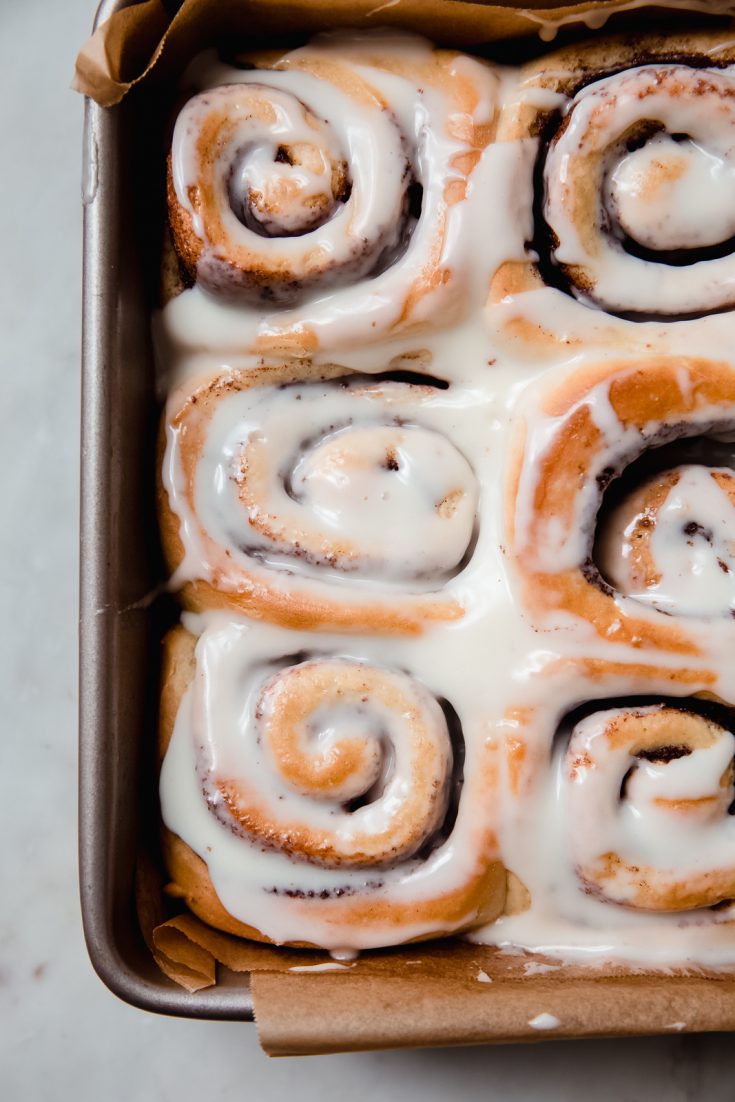