A ridiculously easy cinnamon roll casserole drizzled with cinnamon sugar and melted butter mix and topped with a tangy, delicious cream cheese frosting that will make you sing! This is a cinnamon roll baked casserole and it is perfect for breakfast or brunch!

Go ahead, be lazy.

With my cinnamon roll casserole bake, you can skip making the dough for homemade cinnamon rolls. You can forget about letting it rise and then popping it in the refrigerator.

No need to wake up extra early in the morning before the family to roll it out, smear it with melted butter and a cinnamon-sugar mix, and only to let it rise yet again. Nope, you can forego all of that faff and use store-bought bread, make a French toast mix, and pop it all in a casserole dish. Top it with melted butter and cinnamon sugar and bake it until the family comes running to see who made cinnamon rolls for breakfast!

If there’s one thing that I’m making blatantly obvious between this cinnamon roll casserole and my 1-hour cinnamon rolls, it’s that I refuse to spend a minute longer than I have to make them. I’ll eat all the rolls. But if I’m making them, I want two things:

What do you need to make a cinnamon roll casserole?

How to make an overnight cinnamon roll casserole:

I played with the cream cheese icing quite a bit before settling on it for my 1-hour cinnamon rolls. I used a traditional ratio of cream cheese, butter, powdered sugar, milk, and vanilla and no matter how much I played with it, I found it lacked that signature tang that I love about a good cream cheese icing. So I added in a splash of lemon juice.

Let me say that if you don’t like things that have a ‘buttermilk tang’ to them, you might not like the icing with the lemon juice. And you can certainly replace the lemon juice with an extra splash of milk, but if you’re into a more balanced, sweet yet tangy roll, I find that the tang helps cut some of the sweetness and compliments all the other flavors beautifully!

How to make icing for your cinnamon roll casserole:

While the casserole is in the oven, you want to combine the softened butter and cream cheese using a hand mixer. When the two are combined and smooth, pour in the vanilla extract, lemon juice (if using,) and the powder sugar and continue to mix until smooth, once again. Once the icing is combined, you’ll find that it’s a little stiff. You want to add a teaspoon of milk and allow it to mix in completely before adding another teaspoon. Keep going until the frosting is loose enough to drizzle or until it’s the perfect pipable consistency (if you’re using a piping bag to make a design!) 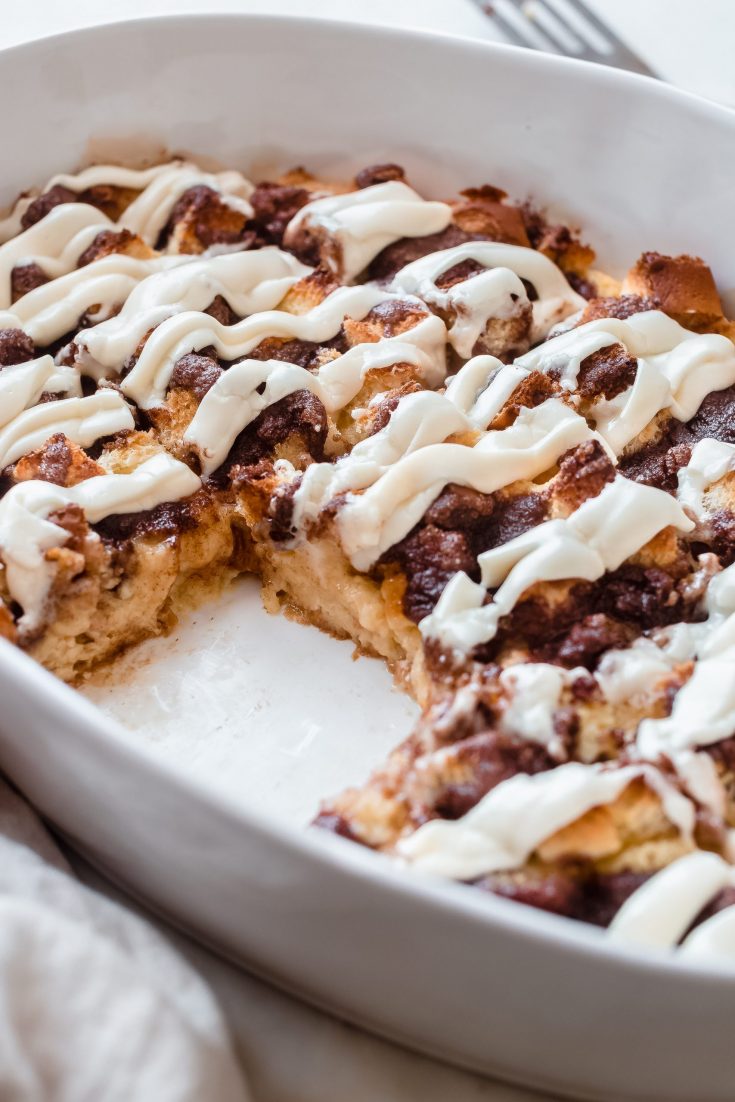