Learn how to make an easy, rich and delicious old-fashioned sour cream coffee cake. The sour cream leaves this cake extra tender and so flavorful! And the pecan crumb topping is so addicting!

I made a large pan of homemade sour cream coffee cake the other day because I was itching to bake something and because my coffee was lonely in the morning. It’s the perfect spring weekend baking project but also doubles as a great addition to the Easter or Mother’s Day brunch table.

The second batch of this sour cream coffee cake went right to work with hubby because otherwise, it was doomed to end up going straight to my thighs.

Let’s face it, anything that’s got a layer of cinnamon built in and one on top makes my heart skip a beat. 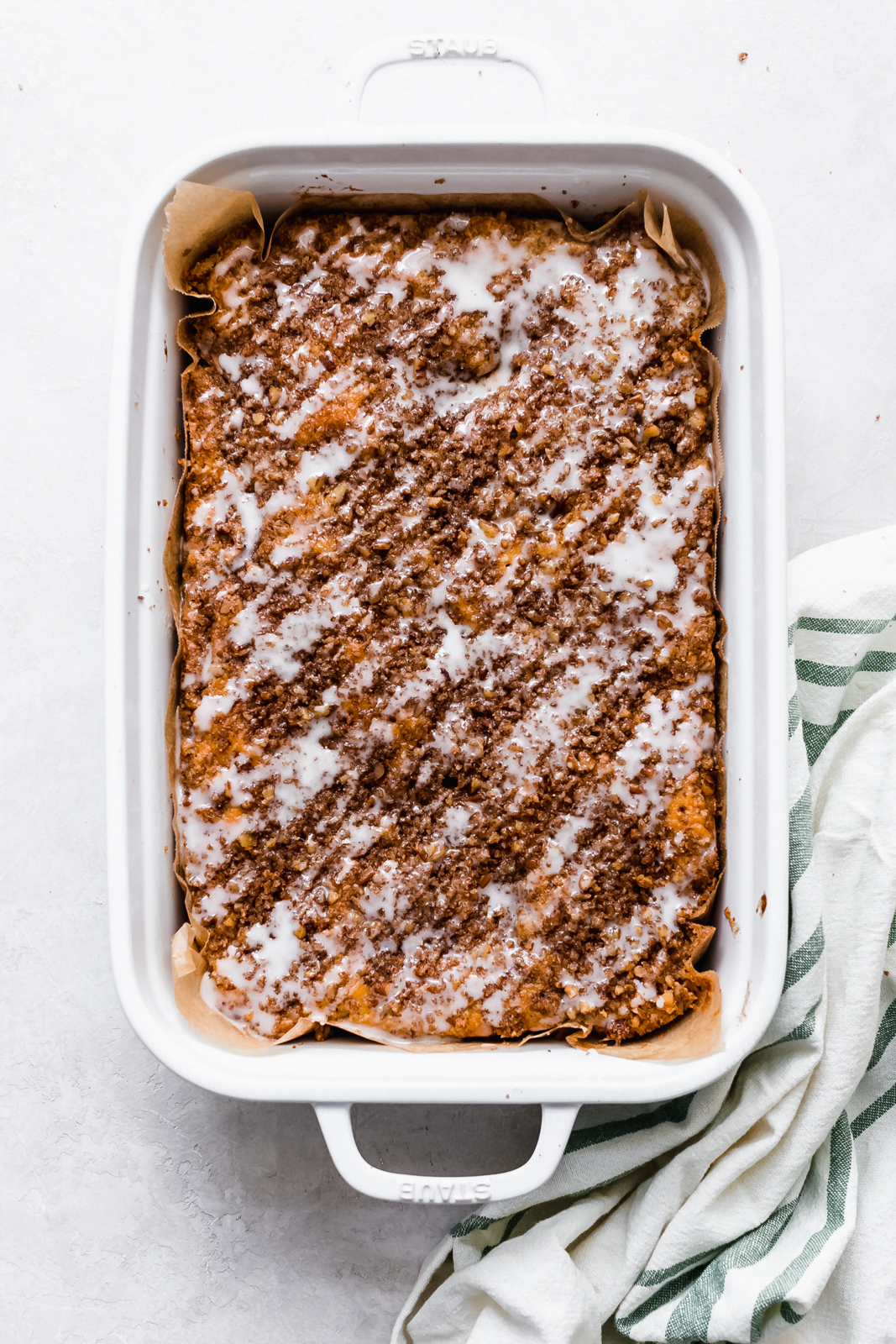 A homemade sour cream coffee cake is an essential breakfast treat that doesn’t require much work and makes enough to share with family or friends. It’s one of these easiest recipes I’ve shared that has a crumb cake filling and a topping. The nutty topping on top is the same and the filling in the middle of the cake.

Cinnamon and I weren’t always friends. As a child, I loathed anything that had cinnamon in it or on it. And then all of a sudden, I started going backwards. Just making up for lost time now, I guess. It’s my secret ingredient in my homemade key lime pie bars; and if that sound weird, look at the ratings on that recipe. Cinnamon is also the star of my cinnamon swirl bread, duh right? And if you haven’t made my 1-hour cinnamon rolls, I have to say; please consider this your personal invitation. They. Are. So. Good.

Coffee cake, also referred to as a crumb cake, is a tender, lightly sweetened cake, usually paired or served with coffee. It sometimes contains a cinnamon streusel-like crumb topping and occasionally, some cakes also have this in the center. Icing or glaze is often used but isn’t mandatory. We call this a sour cream coffee cake because sour cream is used to make this breakfast cake more tender and flavorful. 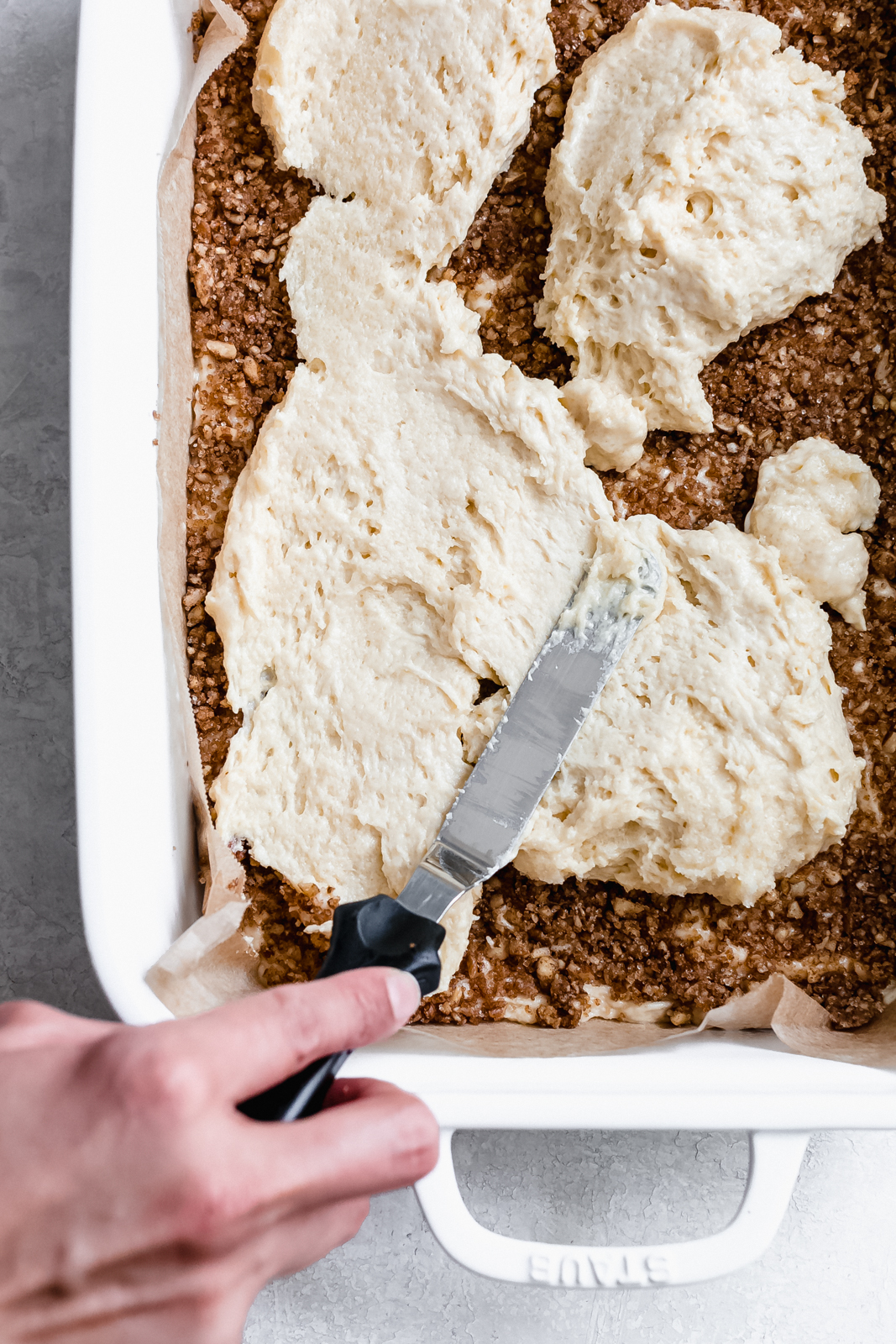 What do you need to make the crumb topping/filling for sour cream coffee cake:

To keep things simple, I made us a crumb filling that also doubles as the topping

A couple of notes:

How to make the batter for sour cream coffee cake:

If you don’t have salted butter for this recipe, feel free to use unsalted butter. But be sure to up the salt to ¾ teaspoons in the coffee cake batter. 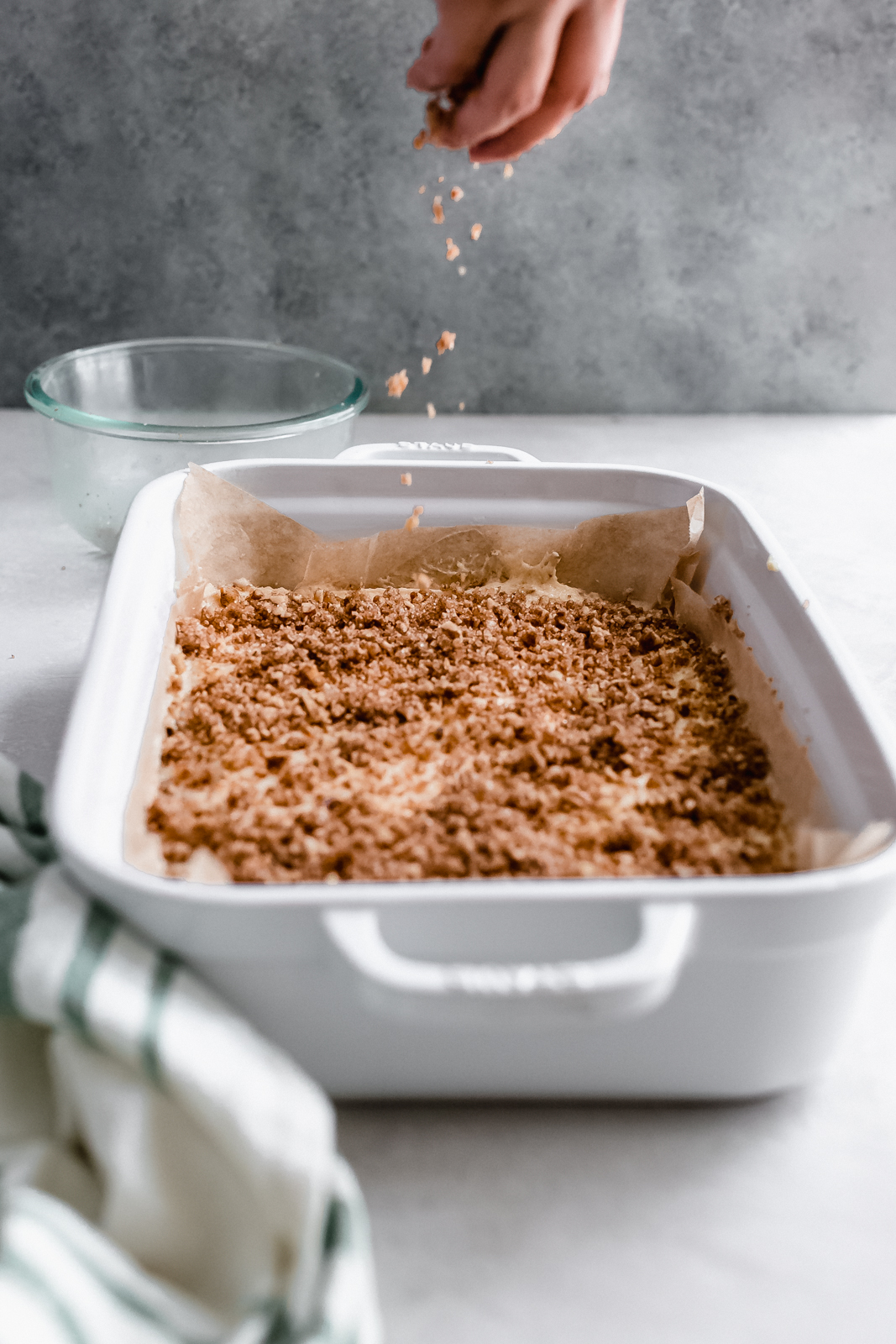 How to make the best sour cream coffee cake:

Please note that this sour cream coffee cake batter will be a litter thicker than most cake batters we’ve made in the past.

The trick to spreading the batter with ease:

Since this coffee cake batter is quite thick, I’ve found the best way to ensure the second cake layer goes on smooth is to drop the batter in dollops all over the cake and then gently spread it using an offset or rubber spatula. I like to spray my spatula with just a bit of cooking spray to keep the batter from sticking to the spatula too much! Works like a charm! 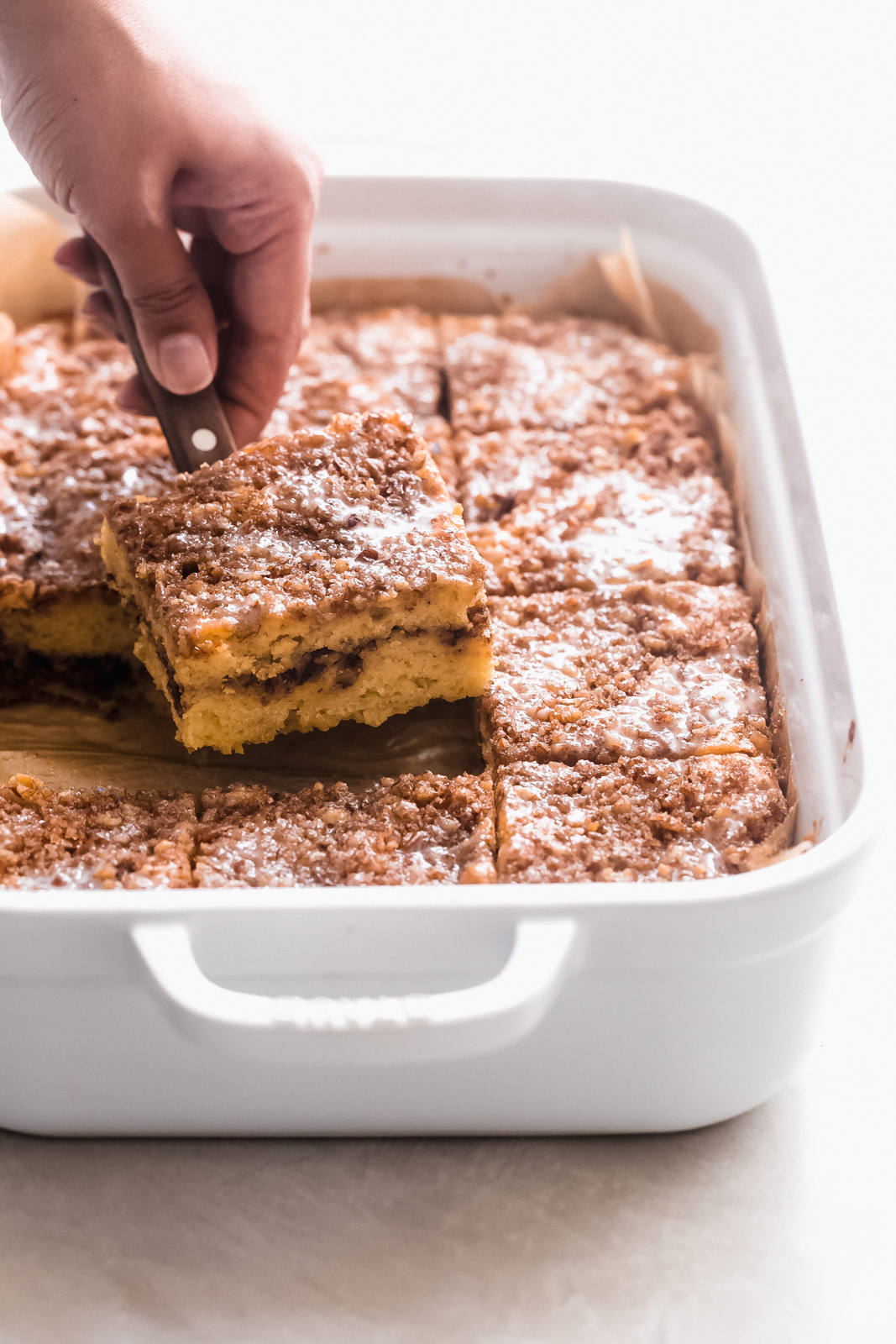 You’ll want to make this homemade sour cream coffee cake in a 9×13 baking dish. It’s the right size for our cake to crumb ratio and will bake up in the time listed. When you look at the cake batter, it’s gonna look like it’s not enough but trust me; the leavening agents are going to help make the coffee cake rise nice and tall.

How to make and easy glaze:

First off, the icing or glaze for this coffee cake is completely optional. Except, I don’t think I could ever eat a coffee cake without a hint of that powdered sugar goodness. If you’d like to make the glaze, it’s just a ½ cup of powdered sugar (also known and confectioners sugar) and 1-3 teaspoons of milk. Start with one teaspoon and if that glaze is too thick, add more milk until it just pours easily!

Leftover cake should be wrapped and covered tightly and kept for up to 4 days at room temperature. 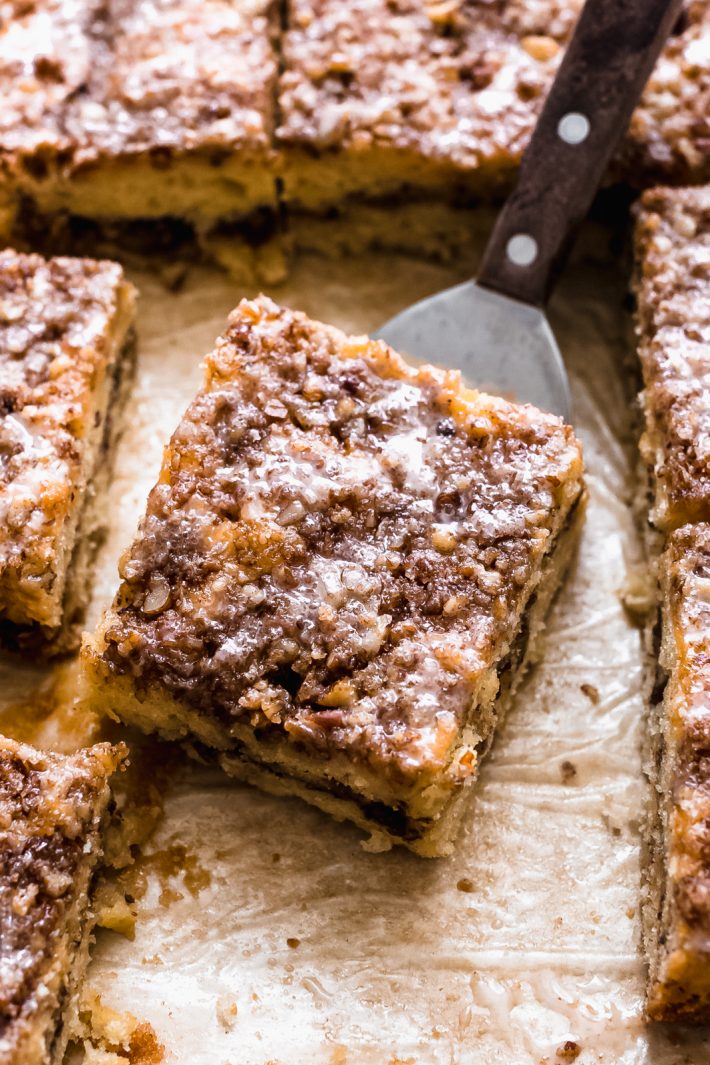 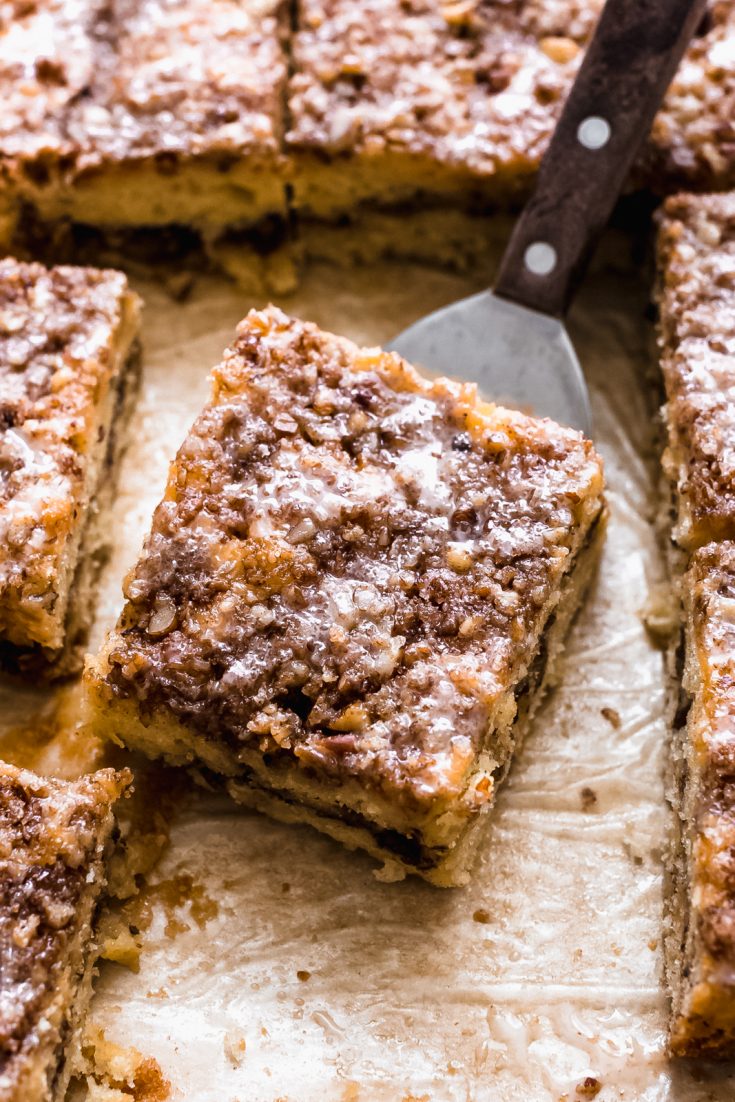