An irresistible creamy lemon chicken barley soup that has tons of veggies, tender barley, and is hearty and comforting for chilly winter days! 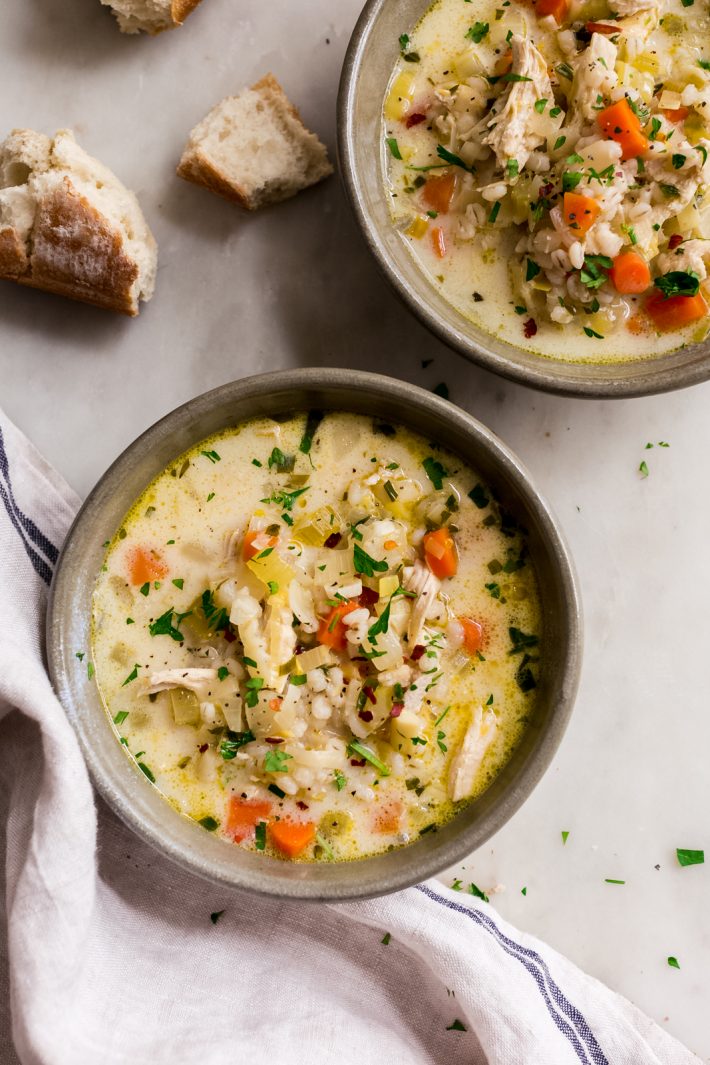 I’ve got a confession. This soup was an accident.

Lemon chicken barley soup is the product of a smattering of heavy cream that was sitting in the back of my refrigerator leftover from another recipe I was testing. And nothing bugs me more than when you’ve got a tiny amount of cream that needs to be used up before it expires. You know, when a recipe calls for something like 3 ½ cups of cream? One cup too many to get away with a pint-size and ½ cup too short for a full quart. When you can’t justify adding heavy cream to your coffee because you know you overindulged in birthday cakes and holiday treats and such.

We’ve had the grossest weather in Houston as of late. It’s cloudy and gloomy all day and cold and rainy evenings. Days like these all I want is warm comfort food for dinner, and my lemon chicken barley soup wholly fits the bill.

It’s warm chicken broth and veggie-based with a generous squeeze of lemon juice and a dash of heavy cream to bring it all together. In the hopes of going healthier in January, I’ve swapped out my usual pasta for pearl barley, and I couldn’t be happier with the results. Herby, lemon-loaded chicken soup – so perfect for winter. 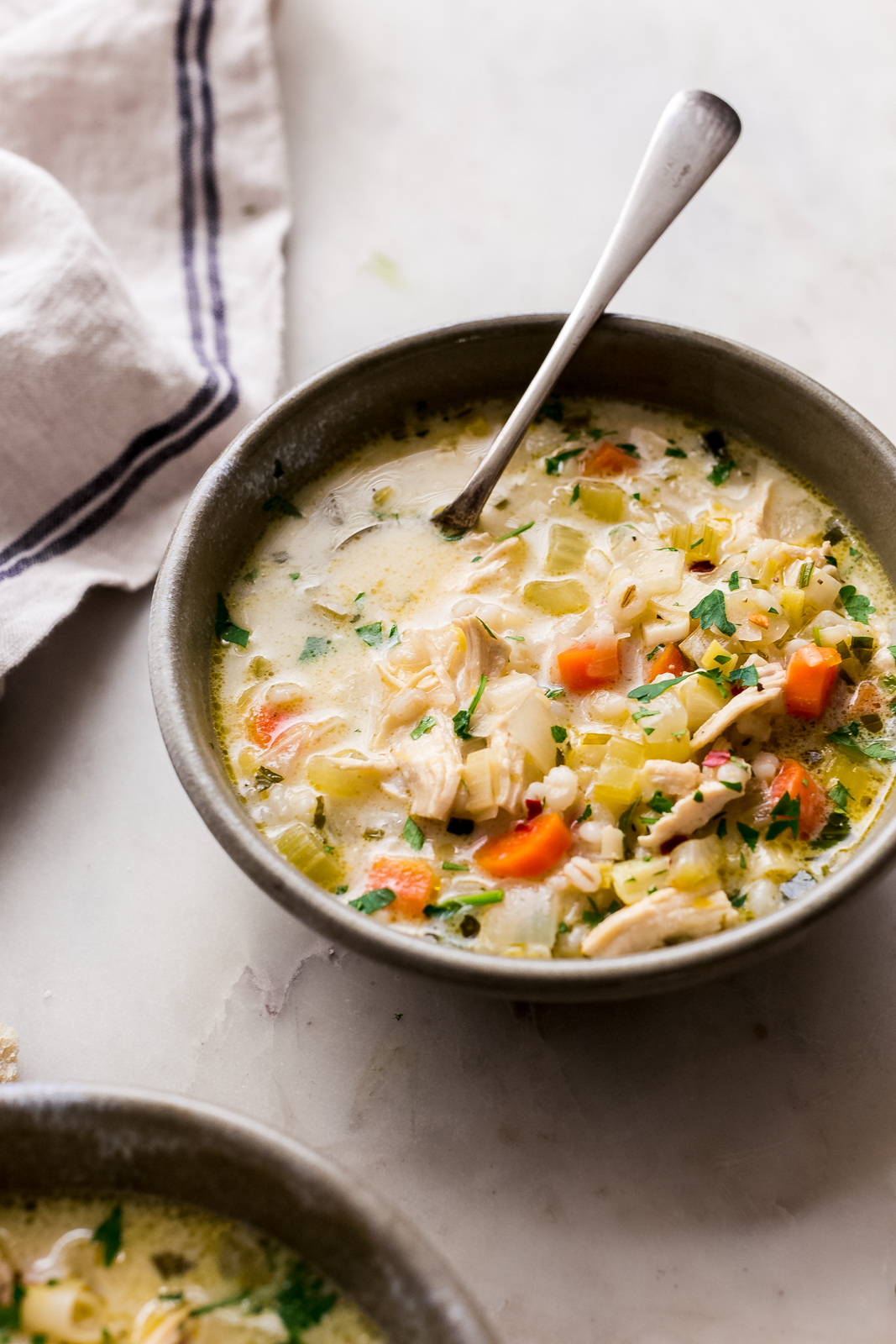 It’s so not a secret that I love soups. I mean just looking through the recent archives, I’ve made us salmon chowder, Moroccan stuffed pepper soup, green curry chicken noodle, and my all-time favorite tomato basil soup. So today’s soup is a little different. Before this soup, I had never actually meshed together barley with chicken before. I’ve made us beef and barley soup in the past, and so many of you guys loved it, I thought why not do a creamy take on chicken and barley?

Think of this as an old-school cream of lemon soup, speckled with tender cooked barley and shredded chicken and veggies. One thing that utterly makes this soup though? The sprinkling or tarragon we add at the end. That licorice flavor does so much good work here.

Mirepoix is a combination of chopped vegetables. Most often they are onions, celery, and carrots. Mirepoix is the ideal starter for most soups. I like to start my soups by sauteeing mirepoix in olive oil and/or butter until the veggies soften a bit. It instantly adds so much flavor!

What part of the leek do you use? 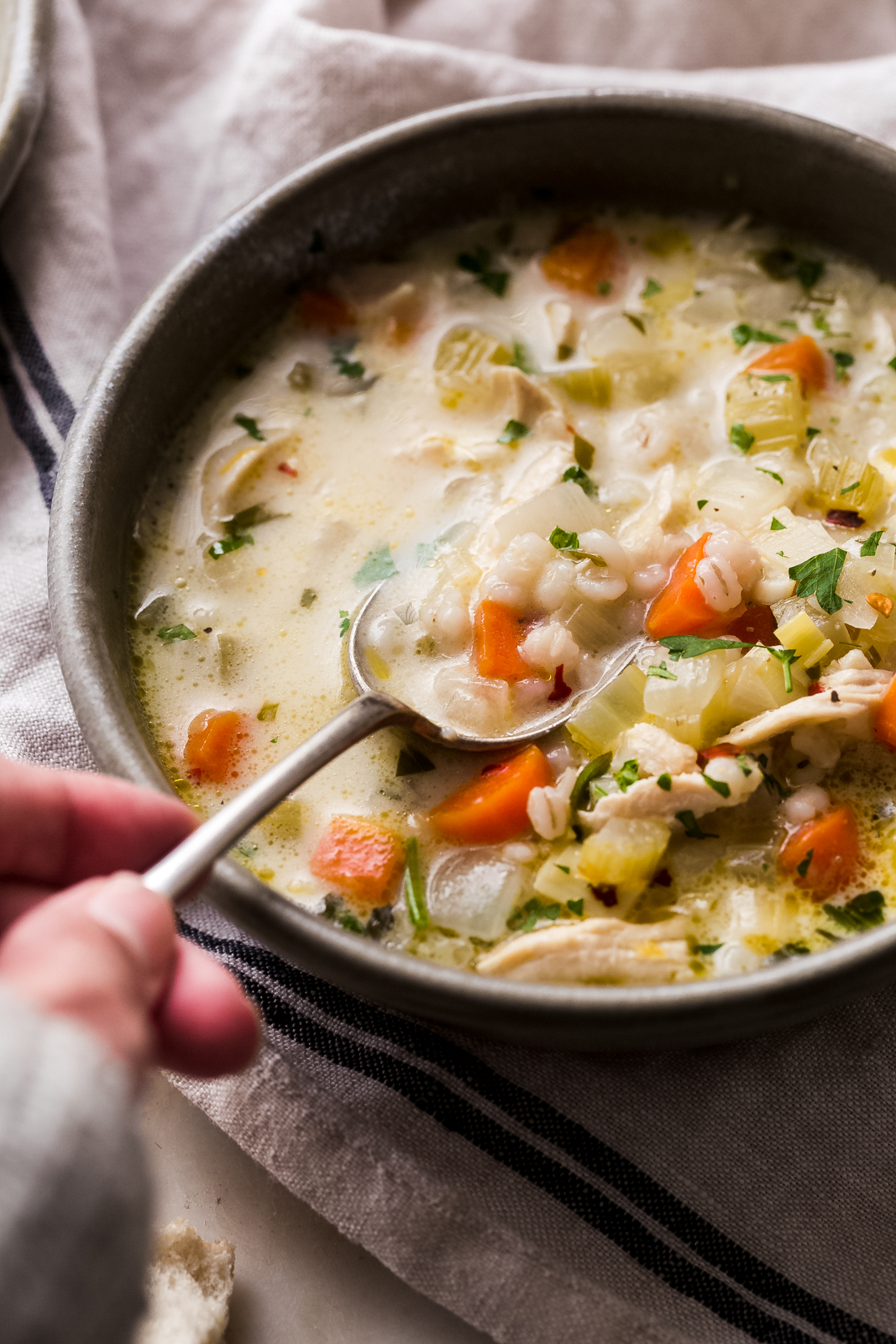 Why use tarragon in this chicken soup?

Tarragon and lemon go together beautifully. Tarragon has almost a bittersweet, licorice flavor that elevates the flavors in this soup! It makes things fancy, without having to try very hard. Chicken and tarragon are truly made for each other! 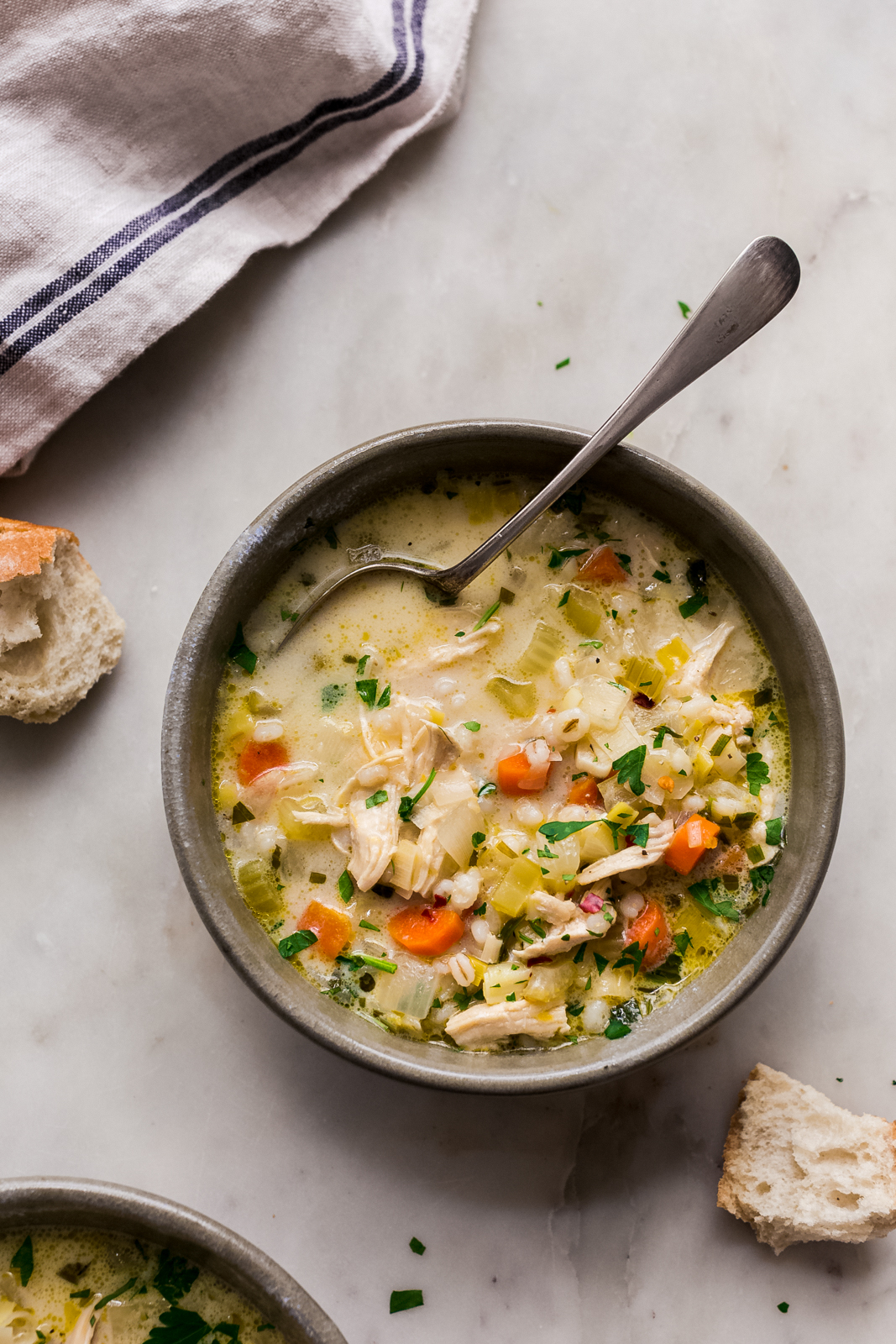 Why do we add some of the soup to the cream before adding the cream to the soup?

Adding a few tablespoons of the hot soup to the cold cream is called ‘tempering.’ This process is used when you’re combining something really hot with something very cold. It’s also important to not skip this step as the soup has a ton of lemon juice and the cream could easily curdle.

Usually, heavy cream is stable enough and won’t curdle because of lemon juice. However, heat plays a significant role and sometimes, even after tempering the cream,  it still can curdle. What I find works well is not allowing your soup to boil once you’ve added the cream to the stock pot.

If you don’t like barley, you can replace it with 1 cup of dry orzo pasta. If you decide to use pasta here and would like to cook it in the soup base, I suggest checking the package for cooking time suggestions (usually orzo requires 10 minutes.) So I would allow the soup to simmer for 10 minutes, then add the pasta during the last 10 minutes (before adding the chicken.) Other smalls shapes or pasta work equally well! I plan on making this with Acini de pepe or pearl couscous next time!

If you follow a gluten-free diet, I suggest cooking gluten-free pasta in a separate pot and either adding it in with the lemon zest and tarragon or serving pasta in bowls before ladling the soup over it. If you’re anticipating leftovers, I suggest keeping the pasta separately so it doesn’t disintegrate into the soup. You can omit the water from the recipe since you’re boiling the pasta separately. 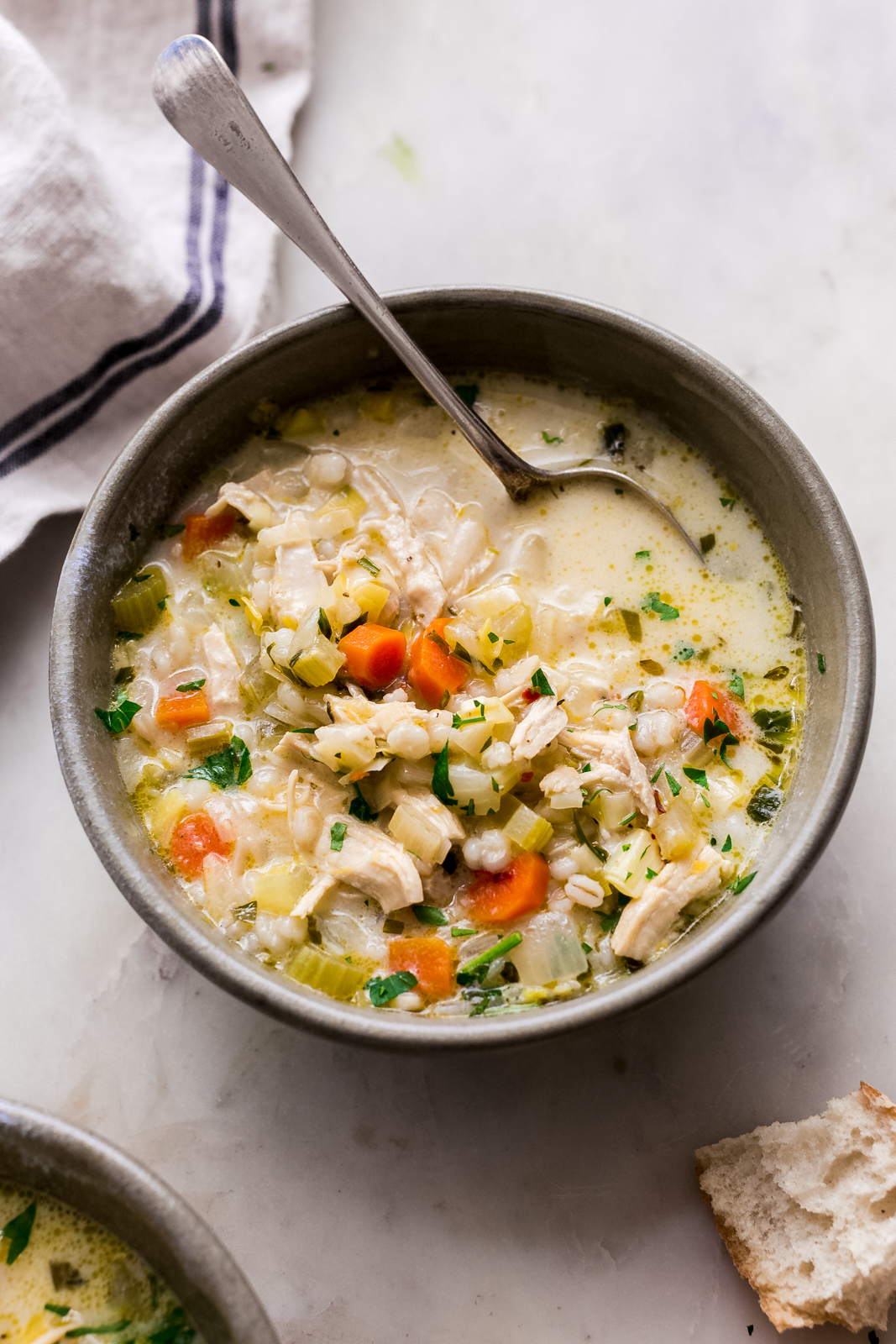 Will the barley thicken the soup?

Lemon chicken barley soup will thicken a bit once it cools or you refrigerate it. To bring the soup back to the right consistency, I suggest adding a little water or broth when you reheat it!

How can I make this soup faster?

I’ve got a couple of tricks up my sleeve that will do the job!

Hearty, warm and so filling! Don’t forget to serve this with tons of crusty bread. And if you’re feeling ambitious, I’d suggest making your own! 🙂 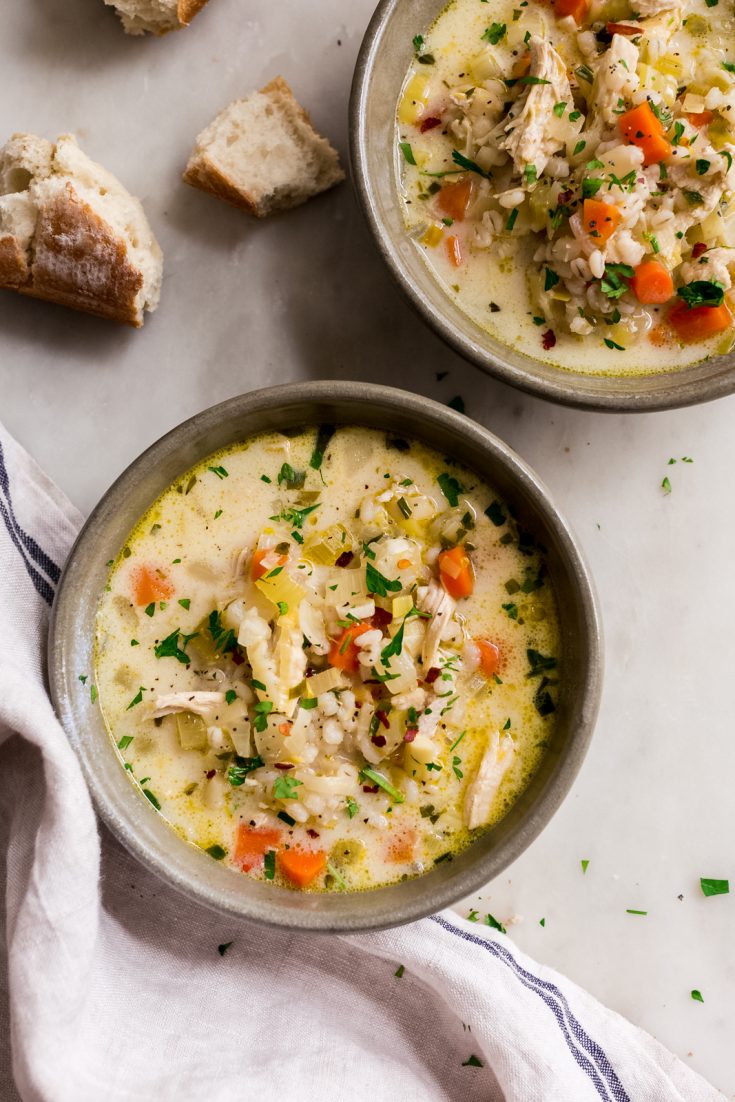