Delicious melt-in-your-mouth bbq beef brisket isn’t hard to make! This slow cooker brisket recipe is easy to make and produces perfect results. Use the meat to make chopped brisket sandwiches or serve with your favorite sides!

BBQ beef brisket is what Texas is all about!

I can’t tell you the number of times we’ve called up our friends and asked if they want to jump in the car and go grab a brisket sandwich with a blueberry cobbler from our favorite bbq shop in town. A chopped brisket sandwich piled high with tender beef, sliced onions, pickled jalapeños, and a bowl of slaw on the side. If you’re a regular like I am, you cross your fingers that by the time you get to the front of the line, they’ll have the burnt end (or tip) ready to chop up for you! I love the extra crunchy bark!

All this to say that homemade bbq beef brisket is a must because then, I’m guaranteed to get the burnt tip every time – or you know, at least half of it!

Brisket is a tough cut of meat that comes from the breast or chest section of the cow. The best method of cooking brisket is low and slow so the collagen fibers and connective tissue break down and liquify. You can’t eat brisket rare, so it shouldn’t be pink in the center when you’re done cooking it through.

Can you shred bbq beef brisket?

Yes, if you wanted to, you could shred brisket. You’ll want to remove any fat left on the brisket and shred the beef using two forks. You could chop up the fat and add it back in if you like that.

However, if you’re looking to make bbq brisket sandwiches, I suggest chopping the brisket into small pieces rather than shredding it! It is much easier to eat a sandwich that way!

Brisket can be marinated for as little as 1 hour and up to 24 hours in advance. I find that the flavor is extra delicious when you marinate so I let it go for as long as I can! The dry rub is simple ingredients. You’ll need:

To ensure you get a tender mouthful of meat, I suggest slicing brisket against the grain.

What to serve with homemade beef brisket:

I have a ton of recipes that would pair beautifully with my homemade beef brisket recipe. I would suggest my southern smoky beans, homemade coleslaw, macaroni salad and potato salad (coming soon.)

If you’re serving this as a chopped brisket sandwich, I suggest piling the meat high on brioche buns, with sweet sliced onions, pickled onions. Also, you want to dip or drizzle the sandwich in homemade bbq sauce, it makes it so amazing!

Other sandwiches to try: 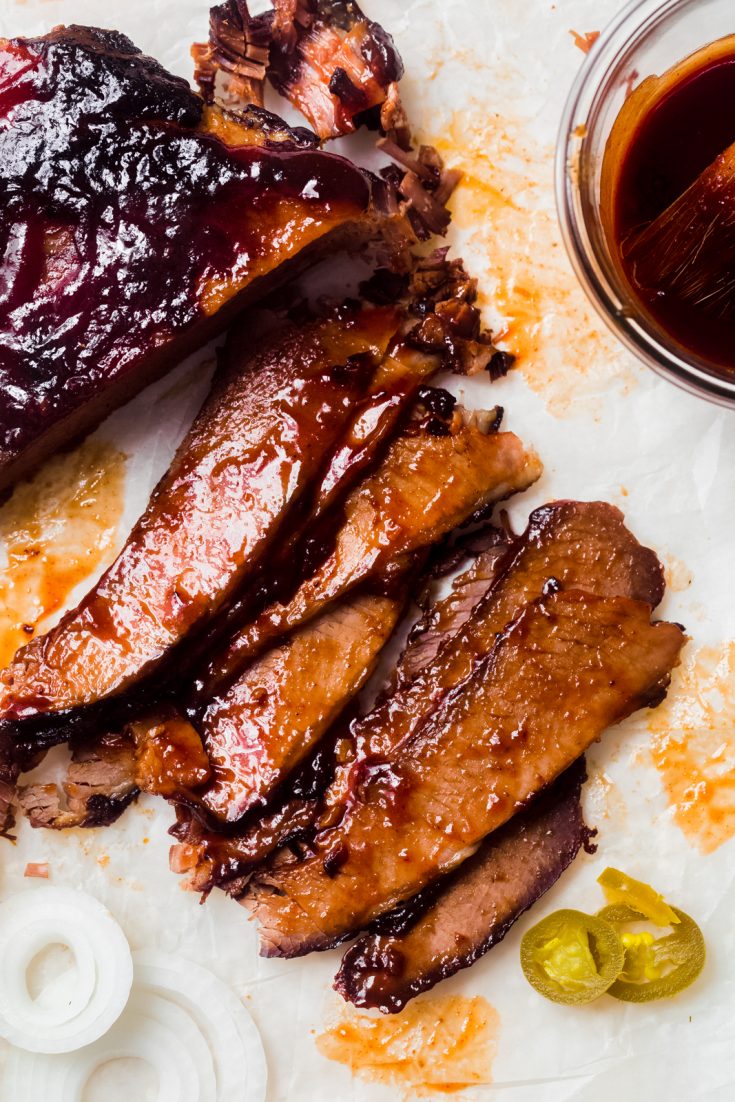