Learn how to make Dan Dan noodles that take just like your favorite take-out joint! This the perfect weeknight dinner to throw together on a rainy or cold night. Make it with ground beef, chicken, turkey, or whatever else you like! 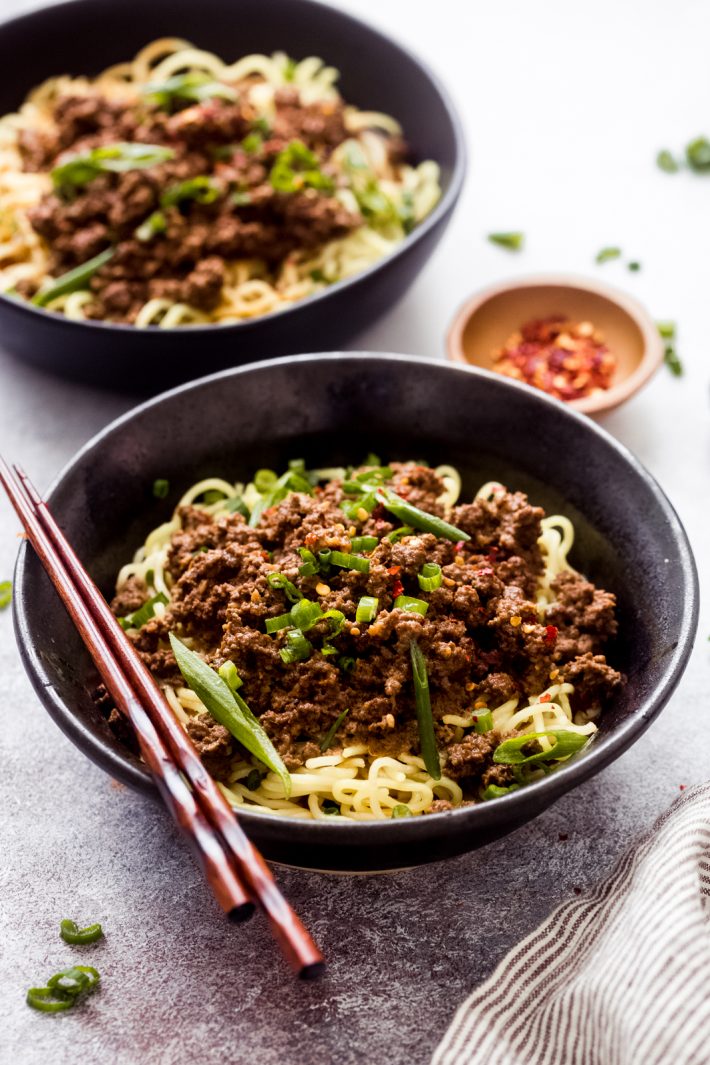 And I know that’s not really a thing, but someone, please start a petition because it should be. The hardest day of the week definitely deserves a big bowl of homemade Dan Dan noodles.

I’ll admit, come Mondays, we’re down to the bare bones in the refrigerator. A knob of butter, a few cloves of garlic, scallions that are taking their last breathes, a jar of minced ginger, and maybe, if I’m lucky, a limp box of spinach begging to be cooked. Mondays are the day I play catchup. Clean out the refrigerator, use the sad leftover carrots and celery to make a homemade stock that I let simmer all day. I’ll also run to the store to stock up on groceries for the weekly recipes I’ll be making and testing. Don’t be fooled though; I make grocery store runs during the week too.

Oddly enough, even though I shop on Mondays, I tend to use up the stuff that was in the refrigerator before shopping. Probably because I’m OCD and need to use the old stuff first before breaking into the new food. So Dan  Dan Noodles are often a weeknight staple for us because this recipe uses mostly pantry ingredients. 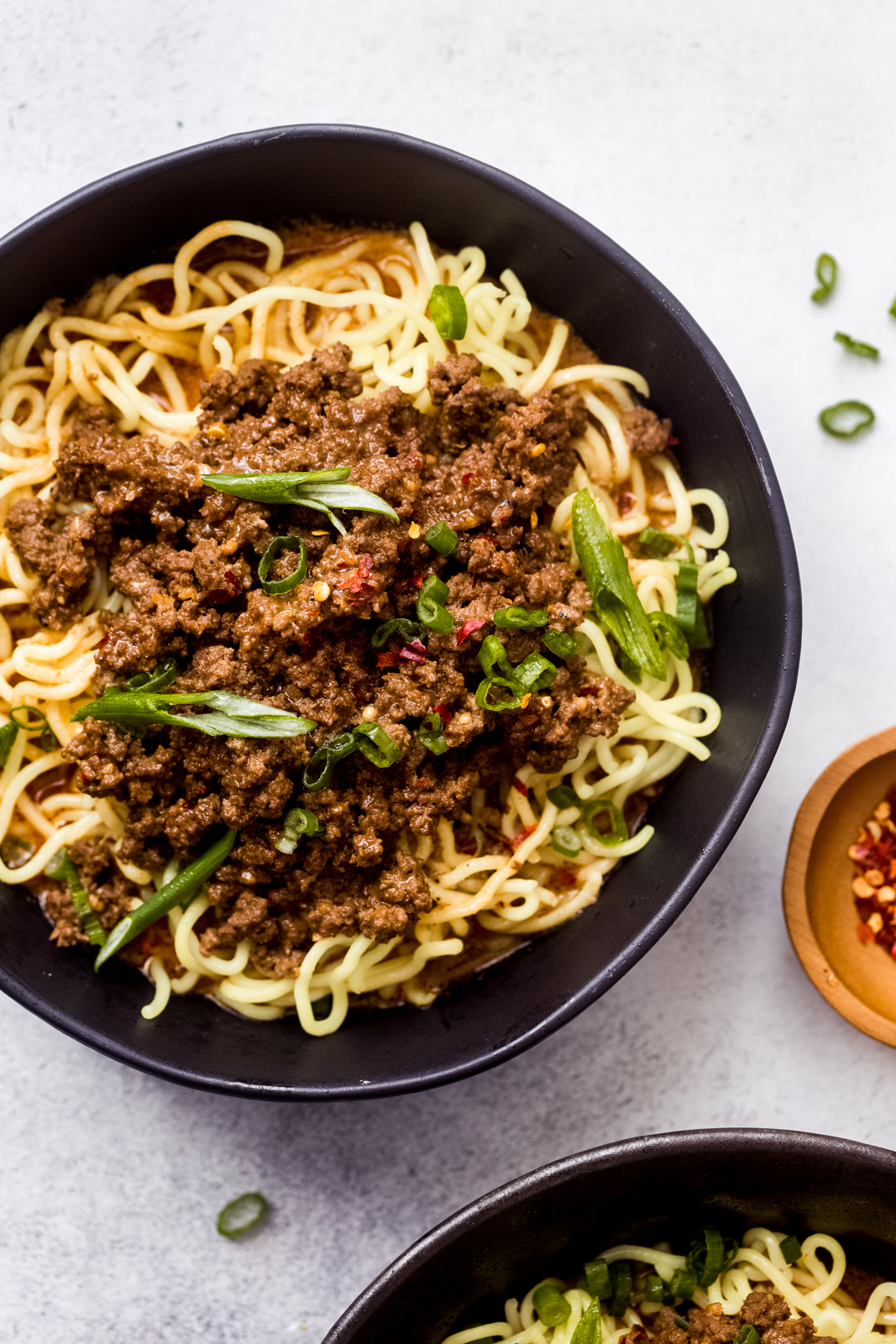 If you’re new around here, you should know, I absolutely love making take-out food at home. Have you tried my Hawaiian shrimp scampi, Indian butter chicken, or my Thai basil chicken? What about my homemade Panang curry, or cashew chicken?

I kid you not; I spend 50% of my time coming up with homemade versions of my takeout favorites. And the other 50%? Well, that’s spent turning classics into meatball versions of themselves, check here for a whole lot of proof.

If you’ve never had Dan Dan noodles (or dandanmian as it’s known) is a Sichuan noodle dish that can be served dry (sort of like a stir fry) or as a noodle soup bowl. I kept it somewhere in the middle there, where you can certainly sip the broth with a soup spoon, but ,there’s also tons of chewy noodles and meat to enjoy with your chopsticks! 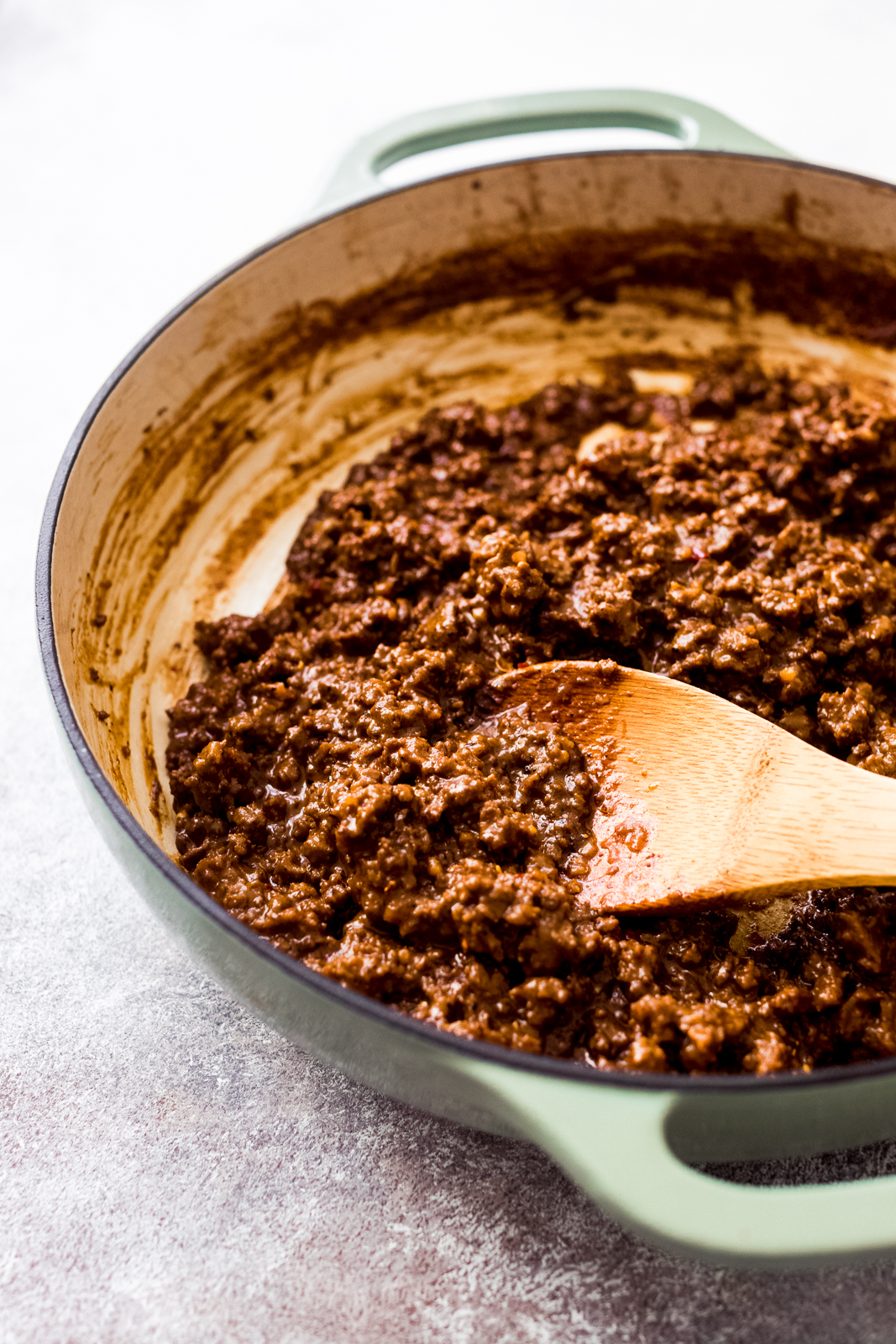 What do you need to make the meat mixture for the Dan Dan noodles?

Can I use something other than ground chicken to make Dan Dan noodles?

Yes, absolutely! You can use ground turkey, ground pork, or ground beef to make Dan Dan noodles as well.

Where did you find the Sichuan peppercorn powder for these Dan Dan noodles?

I had a really tough time finding Sichuan peppercorns in the U.S a few years ago, so I would stop by this glorious spice market in Toronto every time we visited (husband is from here, so ,we were there at least once a year) and I’d bring them back. In recent years, I’ve been able to find them at my favorite Asian grocery stores and also online. They are pretty reasonably priced online if you purchase them whole and then just grind them in a coffee or spice grinder at home!

TIP: if you buy the whole peppercorns, I suggest grinding them fresh before using them in a recipe.

What kind of noodles should I use?

I prefer to use yakisoba noodles for this noodle dish, but you could also use thick udon noodles (like these) or even spaghetti if you can’t find the other noodles I suggested. 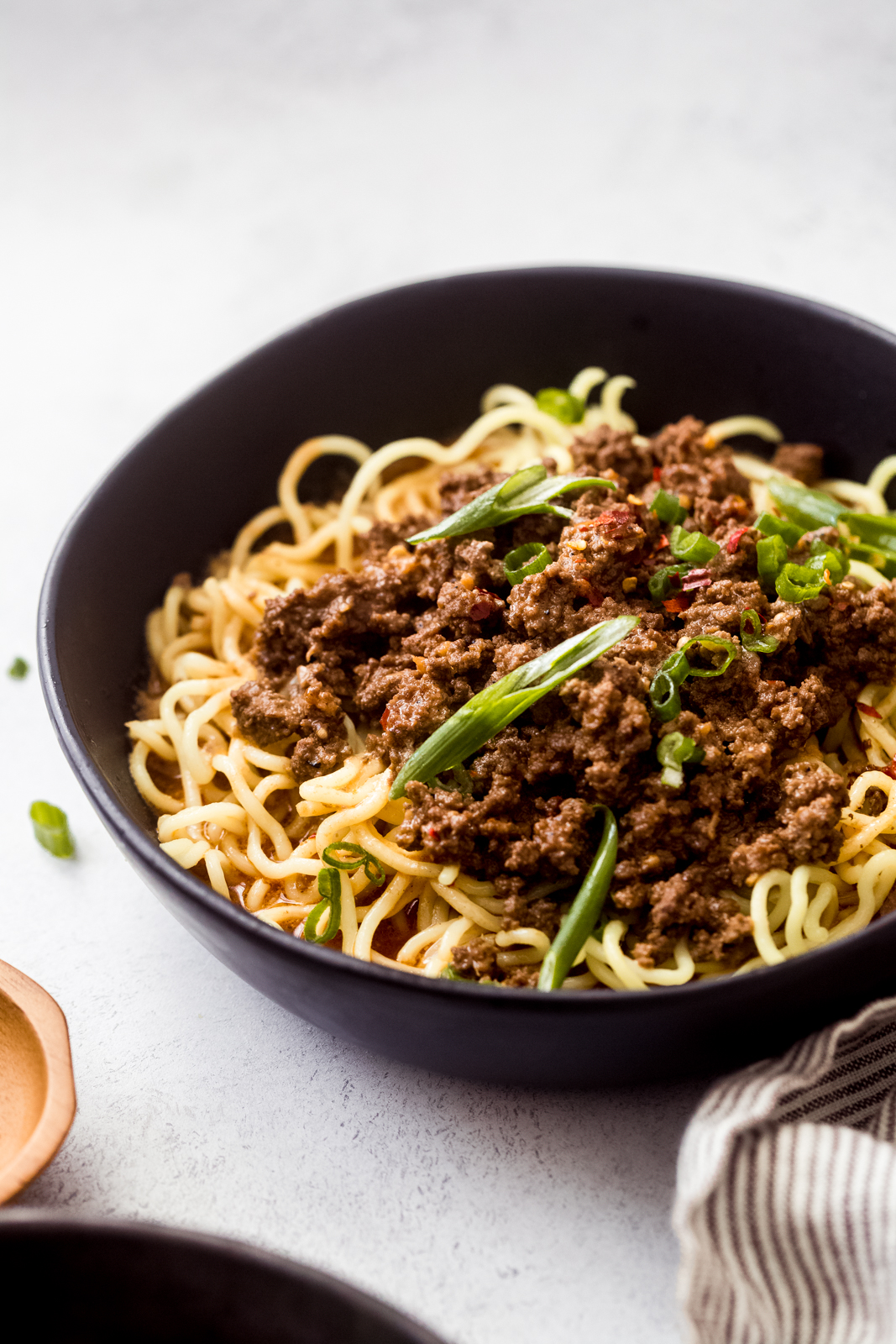 What do you need to make the sauce for the Dan Dan noodles?

However, for this recipe, tahini paste (which is way easier to find) works just fine. You can, of course, use sesame paste (it will undoubtedly yield even better results) if you’d like, and it is available here  to purchase.

What kind of chili oil do I ned to make Dan Dan Noodles?

The chili oil used in this recipe is the kind that’s used in a lot of Asian cuisines. The chili oil usually contains red pepper flakes along with Sichuan peppercorn powder and star anise. There are tons of recipes online that you can find to make chili oil at home if you’d like to make it from scratch. Most grocery stores do carry chili oil in the international food aisle, but you can also purchase it online if you have a difficult time finding it in stores. 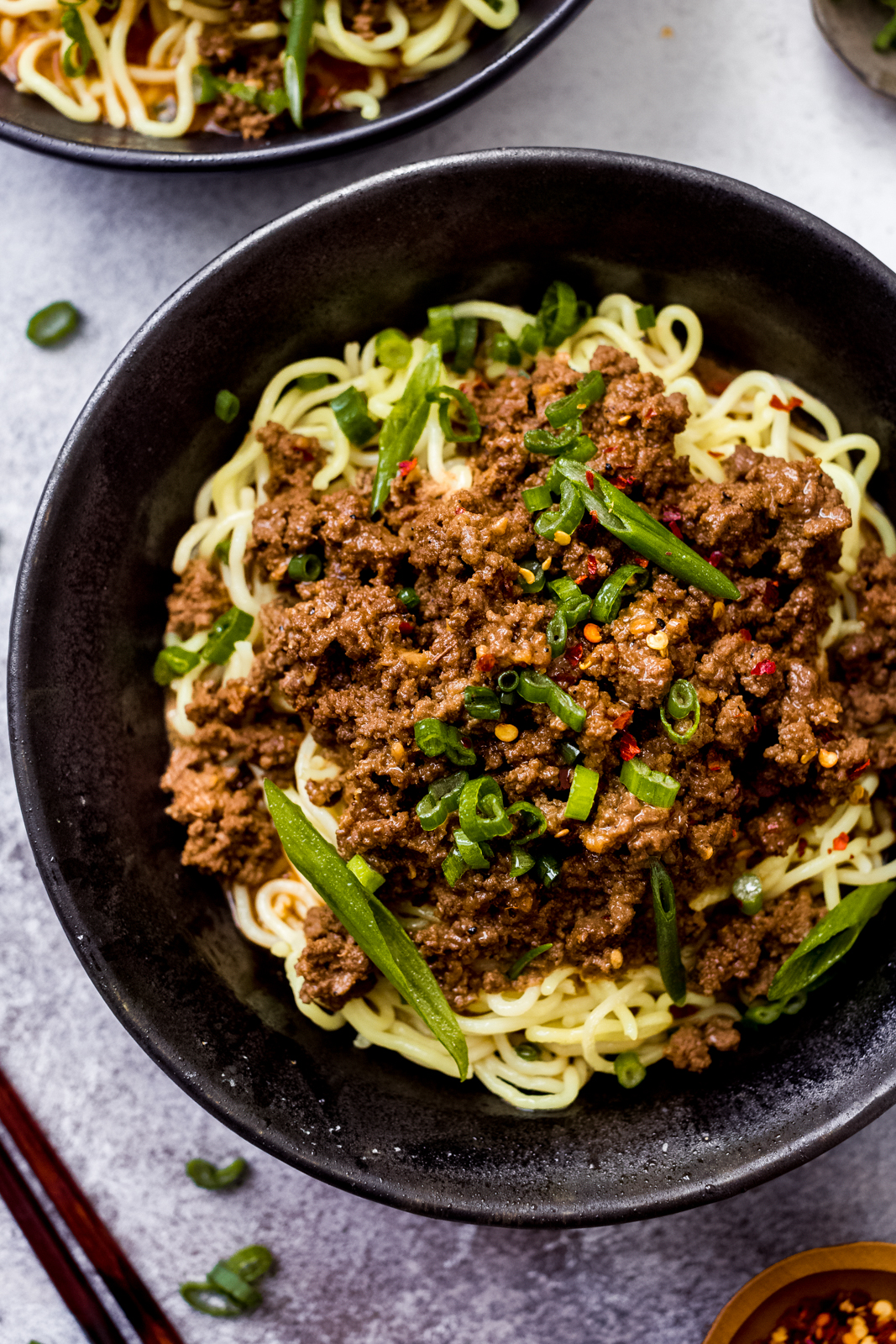 How to make the sauce for Dan Dan Noodles

It’s the easiest thing to make the Dan Dan noodle sauce! Just stir the tahini sauce, sugar, rice vinegar, Chinese chili oil, soy sauce, and ground peppercorn powder together in a bowl. Then, when the meat mixture is almost done cooking, we’ll add in the sauce to amp up the flavors of the Dan Dan noodles.

I know this recipe needs a few ingredients if you don’t make Asian food at home very often, but oh please, do give these Dan Dan Noodles a try. They are a flavor explosion in your mouth in the most addicting way! 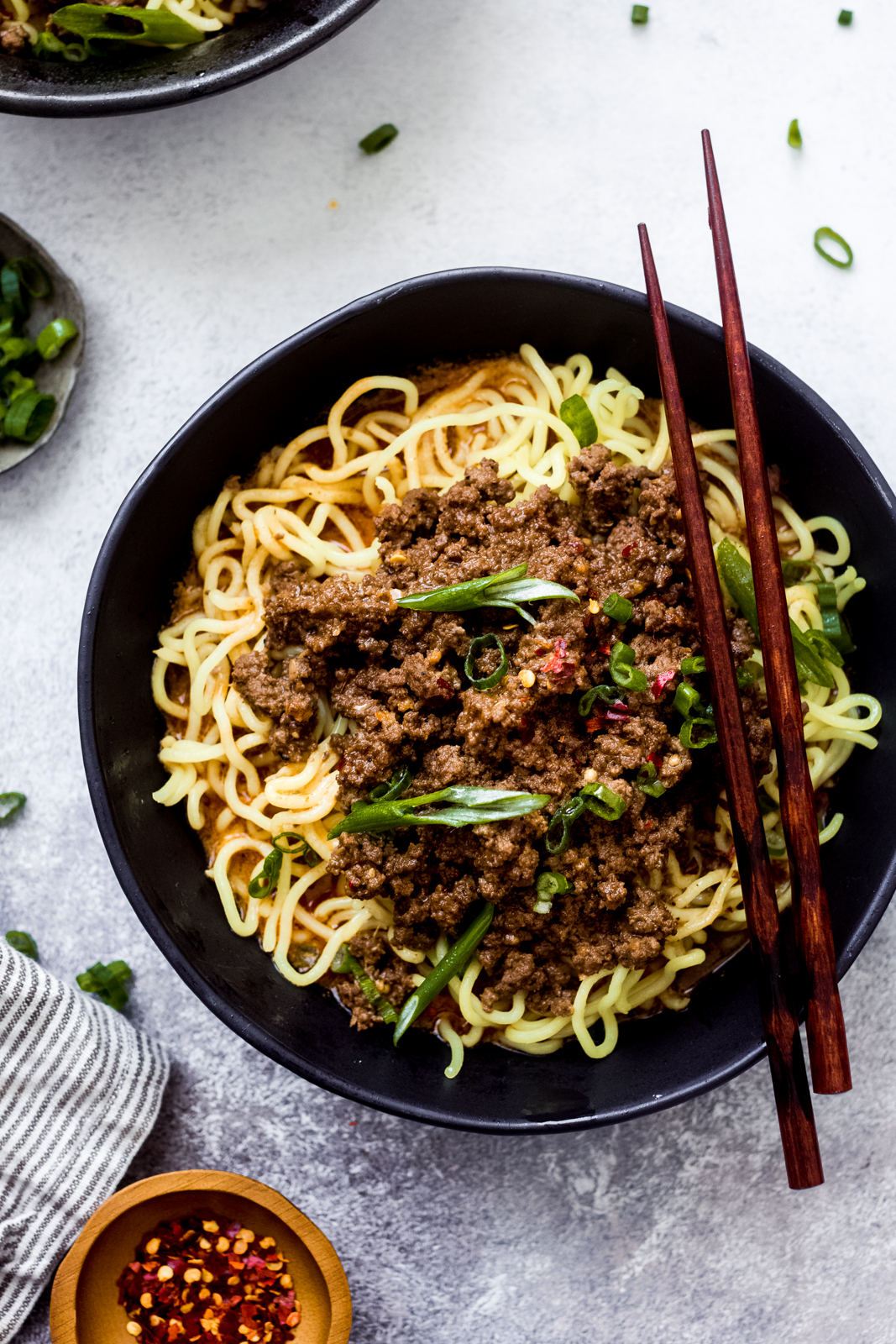 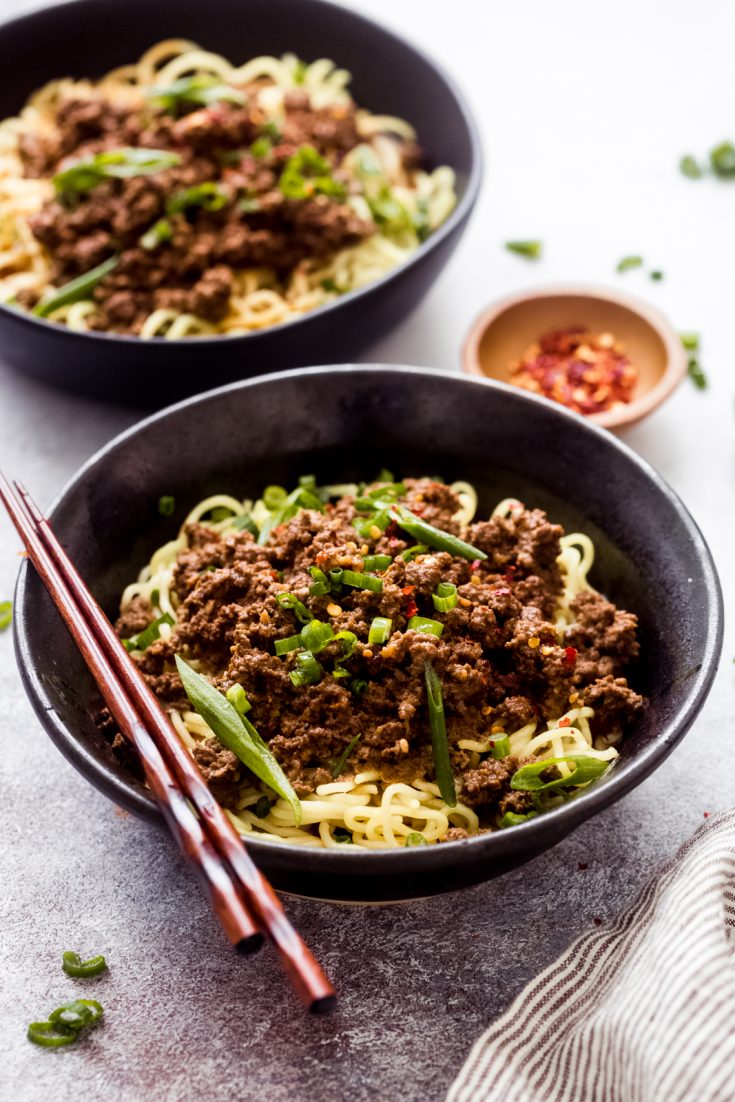