A better way to eat a baked potato! This twice baked potato casserole, also known as, potatoes Romanoff starts with baked potatoes that are shredded and folded with tons of cheddar cheese, shallots, seasonings, and sour cream. So good you’ll want to make this all the time! 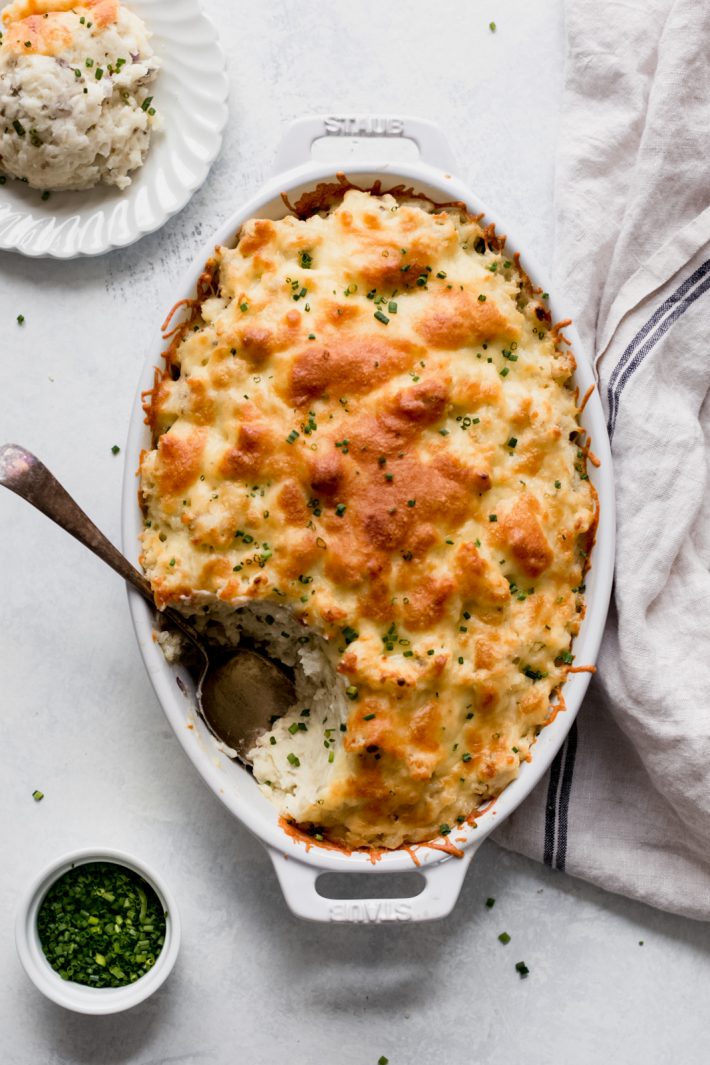 Truth be told, I’m a little sad that October is already in the books. It’s my favorite season and this year’s Halloween certainly did not disappoint. It was dark and stormy, I made a big pot of wild mushroom french onion beef stew (just in the process of recipe testing it,) we passed out candy to the determined few tricker treaters that knocked on our doors, and we watched the final episode of The Haunting of Hill House. I’d say it was positively perfect.

It’s officially November and I have 0% guilt for bringing you a Thanksgiving recipe this early in the month. Some of us like to plan our menus nice and early and whether you fit into that category or not, I want you to be thinking about the sides you’ll be making/taking to Thanksgiving dinner this year.

I always say this; Thanksgiving is all about the sides, not the turkey.

And boy, oh boy, today’s twice baked potato casserole (also known as potatoes Romanoff) certainly is great for Thanksgiving but also Christmas and all those dinner parties that you plan on having between now and the end of the year. 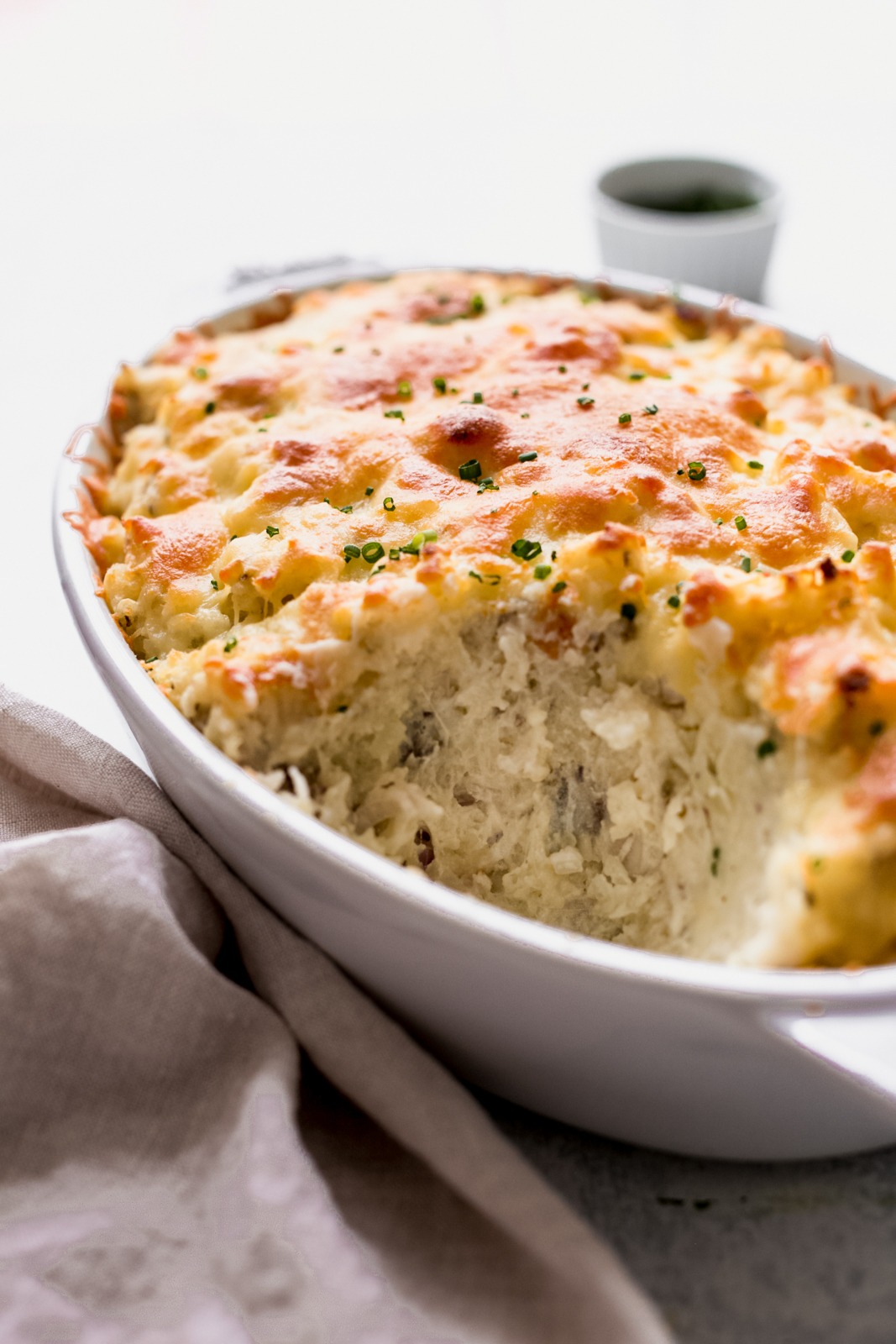 What is Potatoes Romanoff?

Potatoes Romanoff is essentially a fancier twice baked potato casserole. IT starts with baked potatoes that are then cooled and grated and folded together with sharp white cheddar, tons of shallots, seasonings and of course, a generous (way generous) dollop of sour cream. It’s not something you’ll see me making weekly, but it is the perfect side dish for Thanksgiving!

What is the first step to making twice baked potato casserole?

The first thing you need to do is grab your potatoes. Russets work best here. And since russet potatoes come in all different sizes, know that any size will work fine here as long as you have a total of 2 ½ pounds. Start by giving the potatoes a good scrub. It’s important to do this because we’ll use the entire potato when we’re making our twice baked potato casserole – skin and all!

You’ll also want to use a fork and pierce holes in the potatoes all over so that they don’t burst in the instant pot/oven/microwave while cooking! 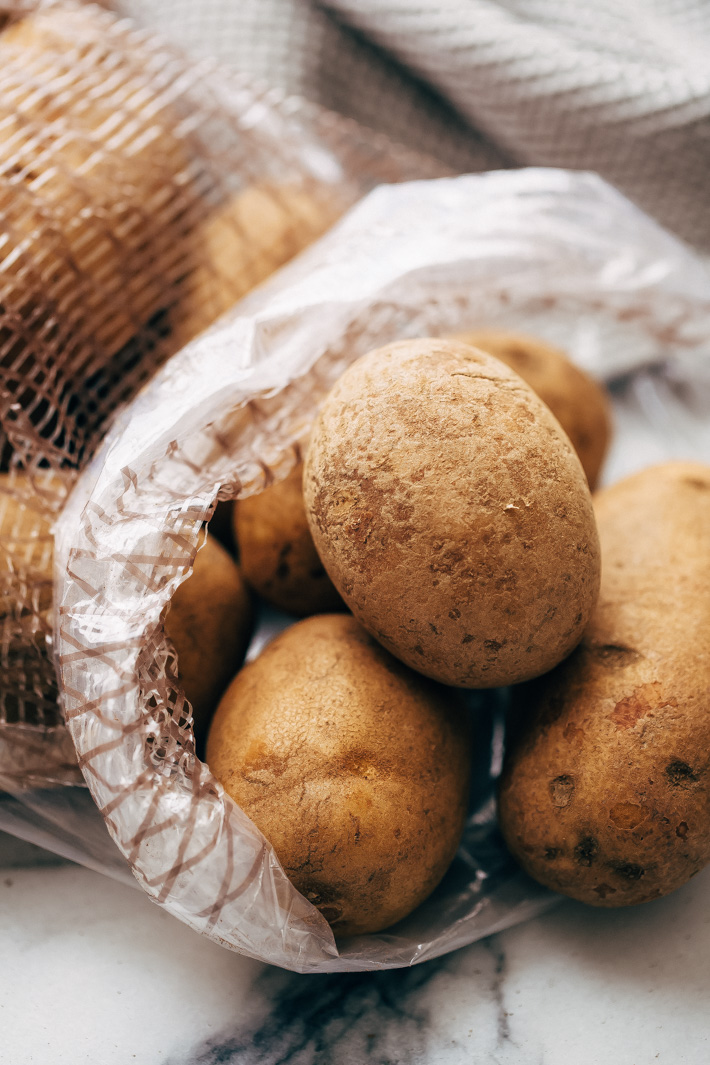 How long does it take to bake potatoes for twice baked potato casserole?

How can you tell when your baked potatoes are done?

The best way to test if their done is to pierce them with a fork. If the fork goes through easily, they’re done! 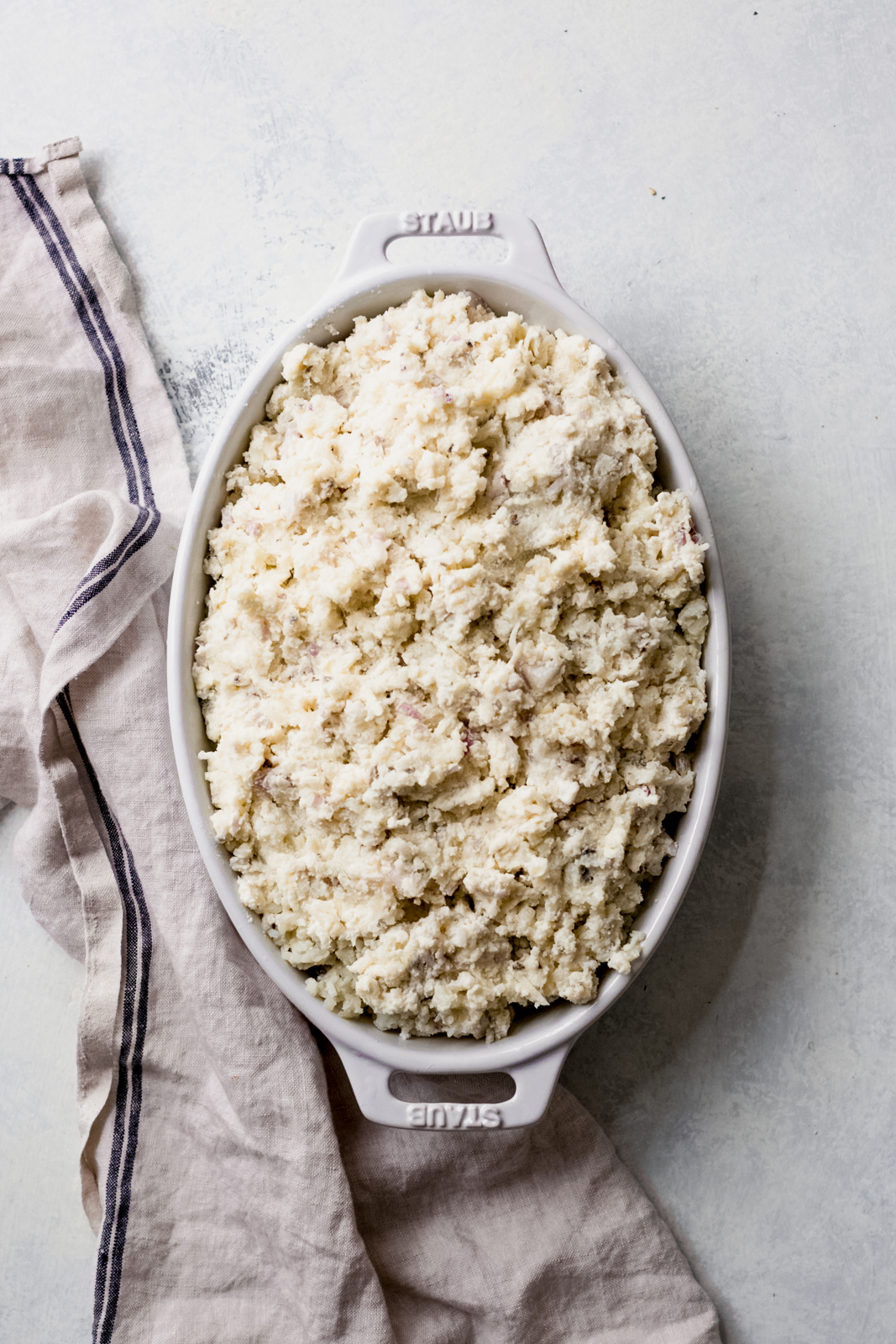 What’s the next step?

The good thing about this recipe is that it demands to be made partially in advance. Once you’ve baked your potatoes. Allow them to cool to room temperature, cover them with plastic wrap and pop them into the refrigerator and allow them to cool completely. This will make life a 1000x easier when you go to grate the potatoes for your casserole.

But also, all that’s left to do the next day is grate the potatoes, mix everything together and pop it in the oven!

You have two options:

I opt for option #2 most often because, after my morning workouts, my arms are always way too sore for that sorta thing!

What else do you need to make potatoes romanoff?

Once you’ve grated the potatoes, here’s what you’ll need: 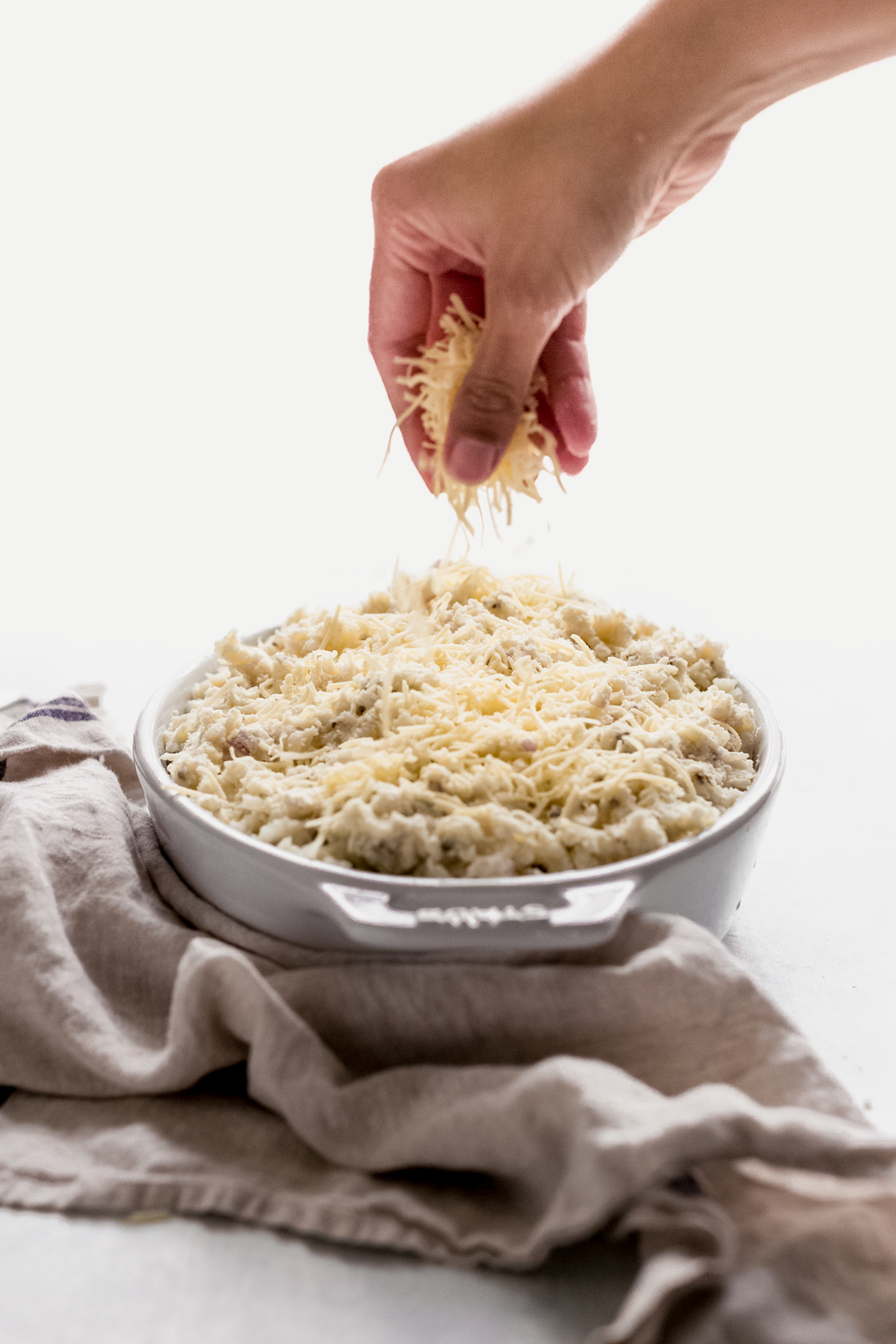 What do you do next?

Here’s the best part, once you’ve grated the potatoes, combine all the ingredients listed above and fold in the potatoes. Then pop it into a casserole dish and top it with some more shredded cheese, because why not? And let it hang out in the oven until it’s bubbly and golden.

Try something a little different this Thanksgiving. Sure you can make the traditional sweet potato casserole, go off script and make roasted garlic mashed potatoes, or those that are ready in 20 minutes, but this twice baked potato casserole is sure to raise a few eyebrows in the best way possible! 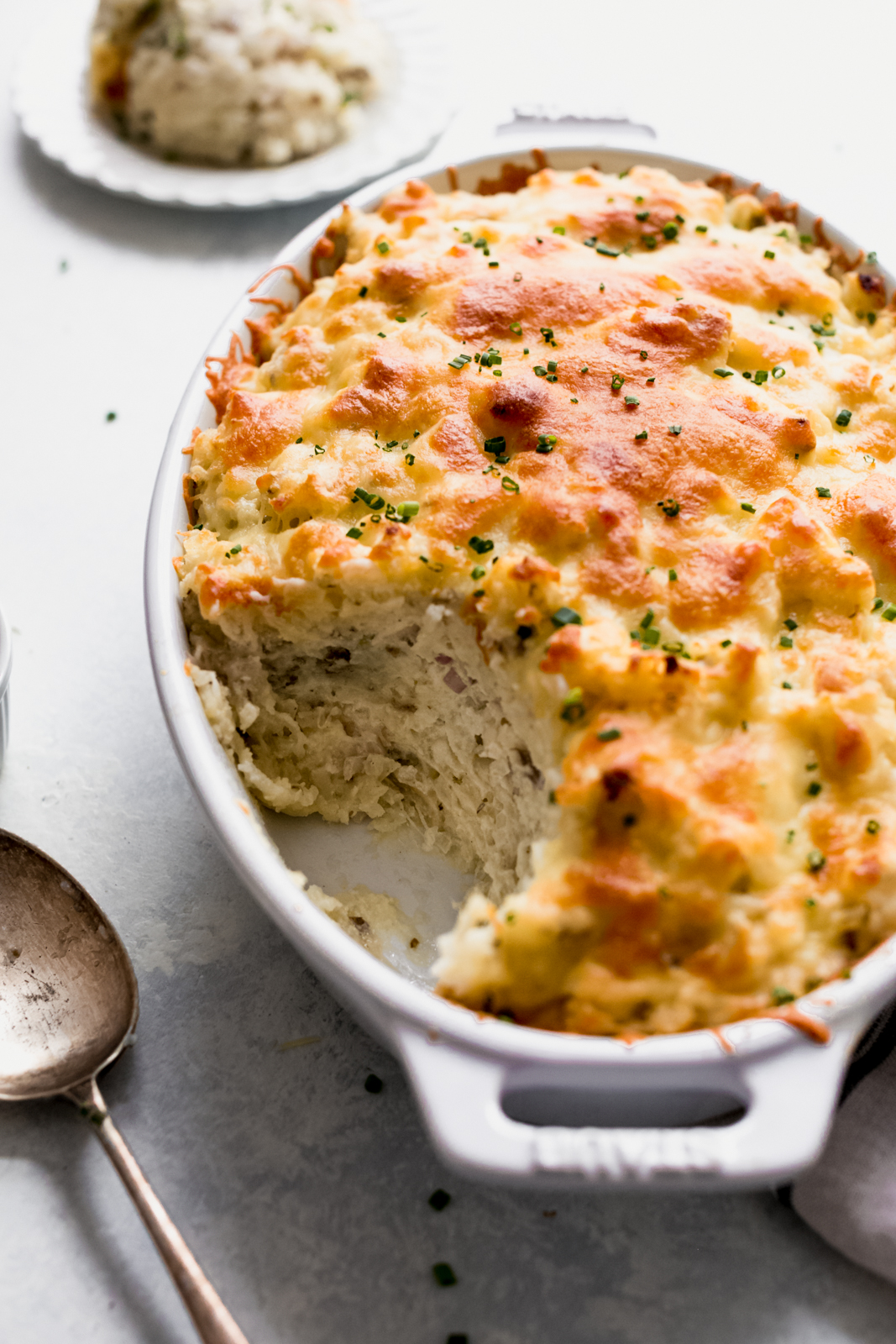 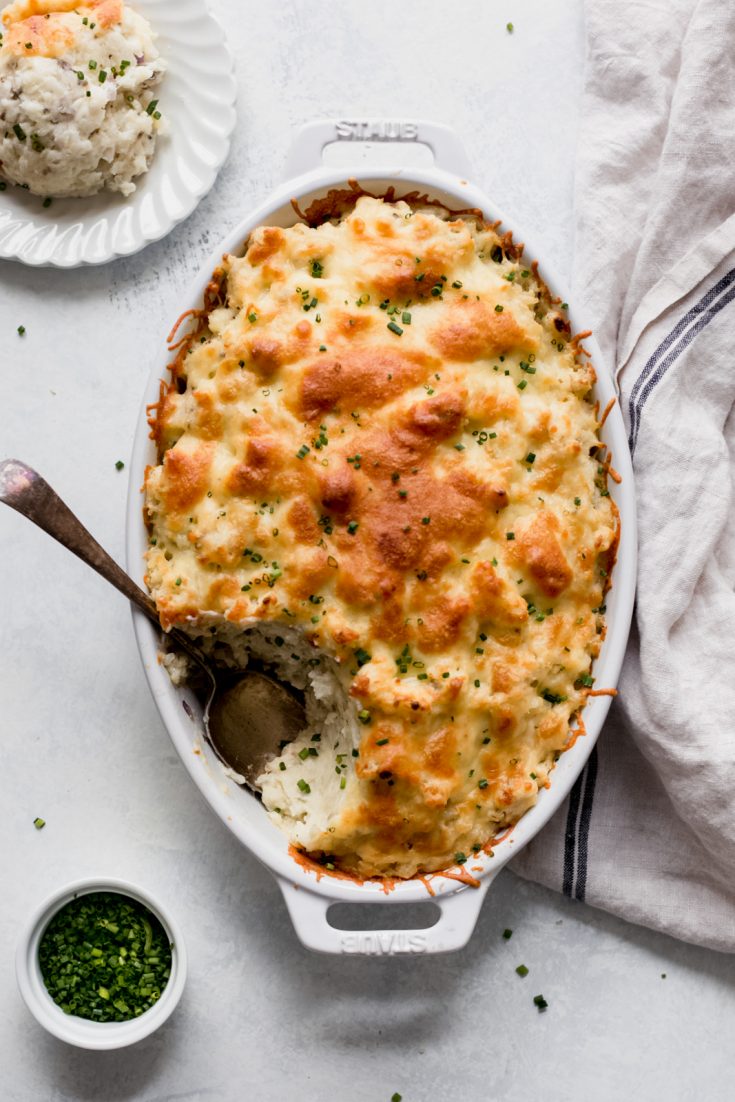