Simple Shrimp burgers that you can serve on top of the yummiest jalapeno lime slaw. You can also stuff them into a brioche bun and serve it up with the slaw on top! So many ways to enjoy this. 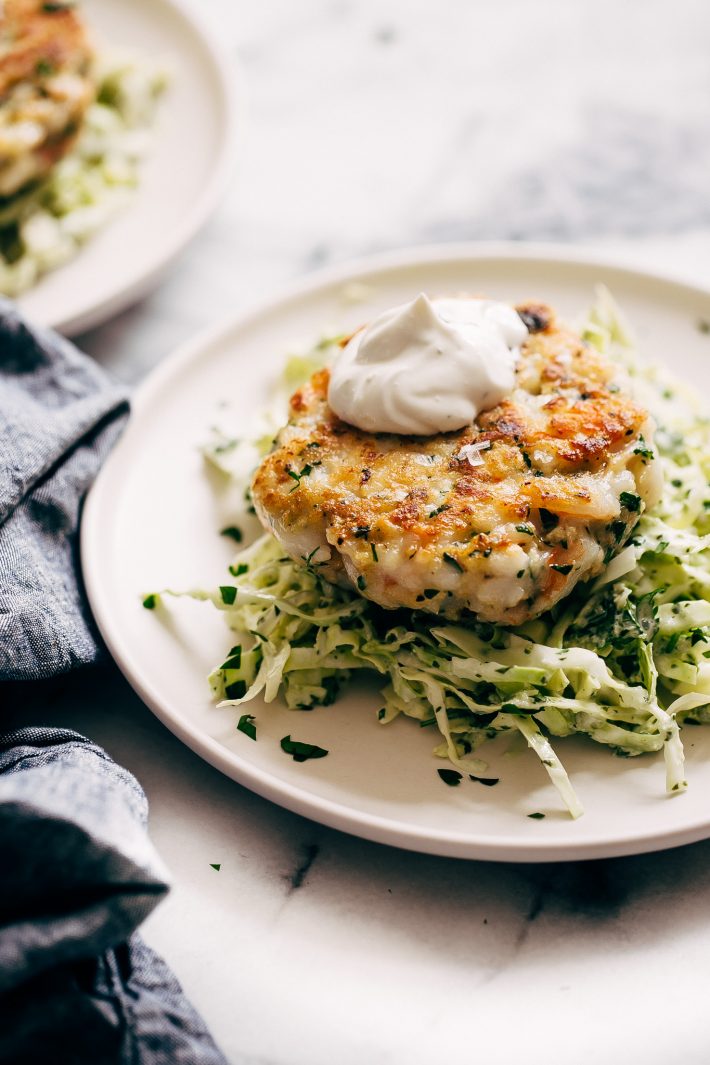 Ever heard of a shrimp burger?

Okay, so neither had I. But that doesn’t mean we can’t make it a thing. It’s kinda like a shrimp cake but it’s kinda not. When I think of a shrimp cake I think of a dainty, miniature patty that’s light and airy not hearty in the least bit. And this isn’t that. It’s a full-on, protein-packed meal so I’m doing it; I’m calling it a shrimp burger. It’s the kind of thing you can still pull off pretty quickly on a weeknight so don’t worry!

And I know I’m going low carb on you and there’s no bun! But I say you do you, boo. I can just imagine how this would all come together on a pillowy soft brioche bun, topped with a generous amount of slaw. Creamy, crunchy, tender bread, and protein-packed shrimp burger patty. Give me a second while I try to figure out why I love my bun-less version so much.

Now about that slaw. We’re using a little greek yogurt, a seeded jalapeño, a generous squeeze of lime and a handful of cilantro. I need you to make this slaw even if you’re not on team cilantro. Just swap it for any herb that tickles your fancy. Parsley is the perfect candidate if you like things smooth and simple. 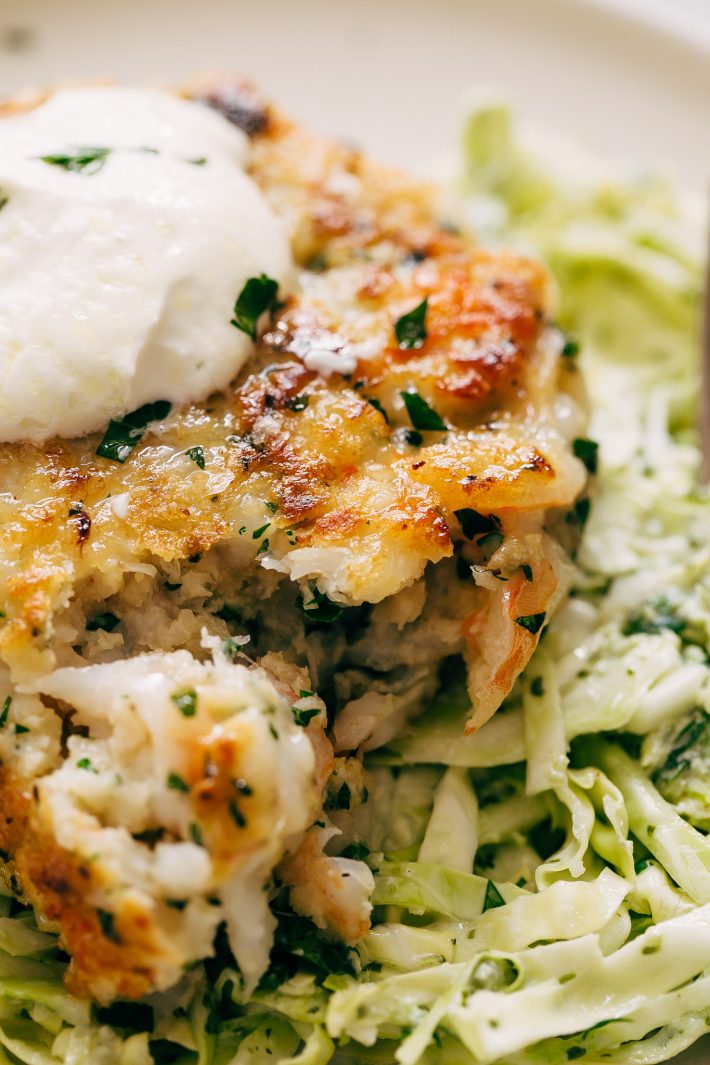 I’ve made these shrimp burgers a few different times now, and I love them because you can do so much with them.

While I was recipe testing these burgers, I wanted to come up with a way to make them light and fresh yet still big on the flavor. And what better way to do that than to make a recipe that can easily be customized to your own taste?

Sometimes I’ll throw in some fresh lemon zest into the patty mix. Nights when I can’t be bothered to zest a lemon (which can sometimes feel like a task, depending on the day) I’ll use the help of the spice cabinet. A few shakes of salt-free lemon pepper seasoning, a pinch of cayenne, a hint of basil, or a sprinkle of Italian seasoning. These ingredients add a special somethin’ to the mix and make the meal into something brand new, every time. 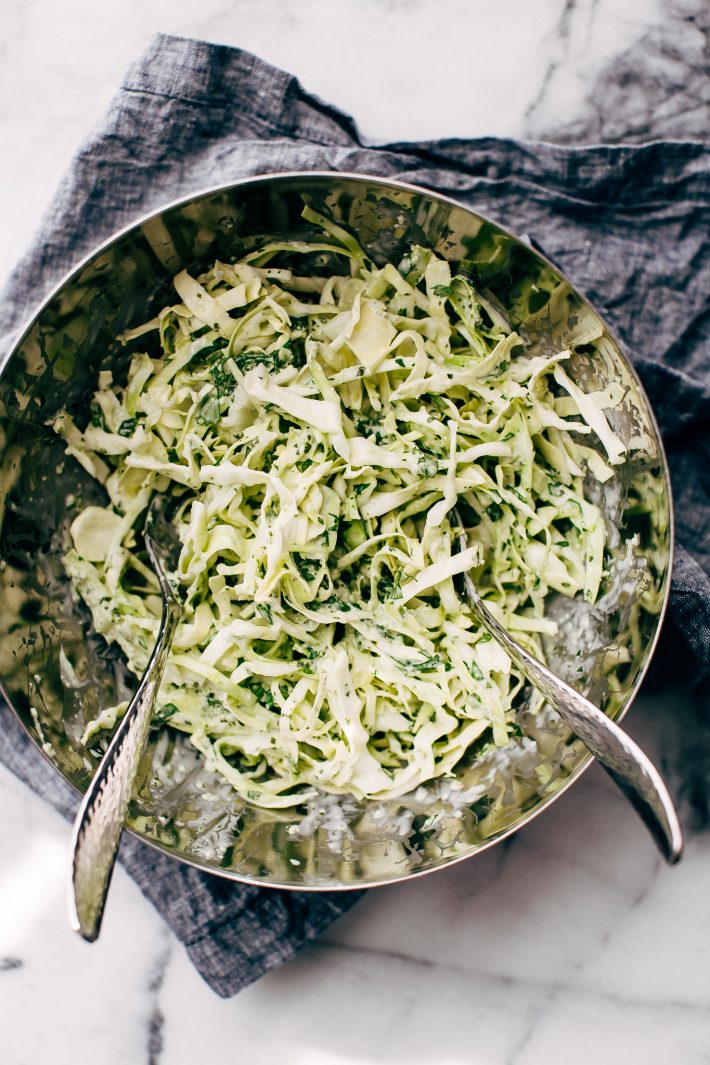 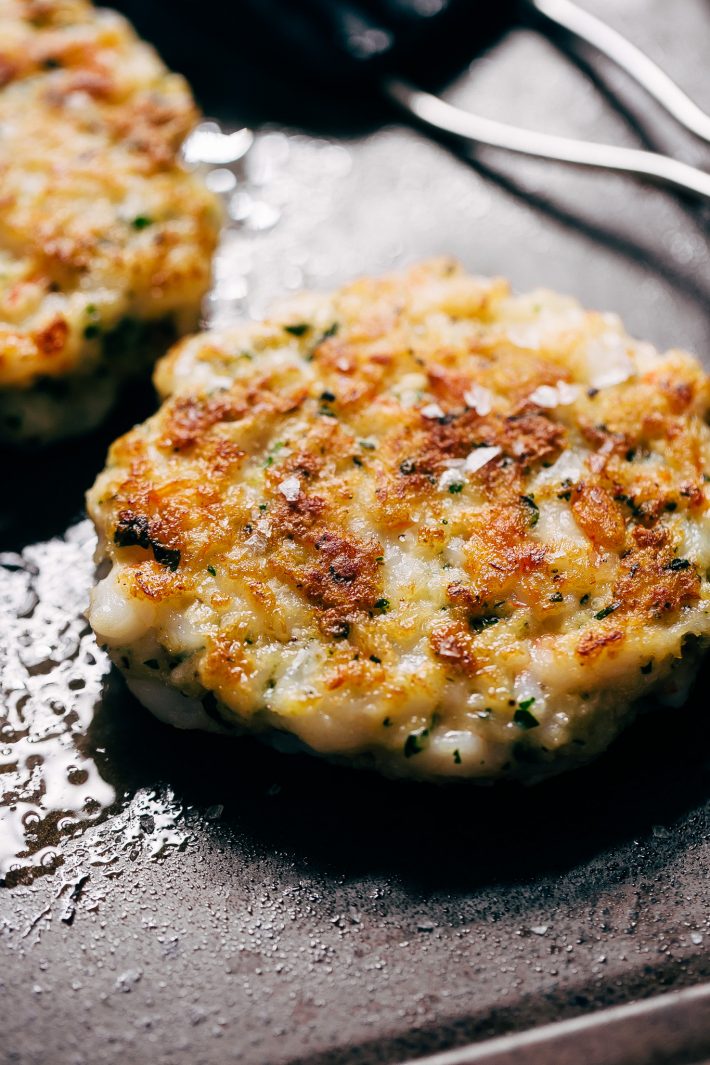 Let’s talk about these shrimp burgers.

I’m using peeled and deveined raw shrimp that I picked up about 15 minutes before I threw this quick dinner situation together. I suggest using raw shrimp for these burgers because cooked shrimp will get super dry when you’re giving these bad boys that pan fry. Frozen shrimp is fine, just be sure to defrost and squeeze out as much water as you can before you give them a chop. I just roughly chopped them up on the cutting board. You can also throw the shrimp into a food processor and just pulse it a few times if you’re not into the whole chopping raw seafood scene.

Other than that you’ll need a little garlic powder, salt, pepper, and chopped parsley – that’s it! See what I mean when I say you can make this on the fly? You’ve already got most of this stuff in the pantry.

Next, we’ll make the jalapeno lime slaw. We’re just tossing it all into a blender or a food processor and giving it a whirl. That’s greek yogurt, a few garlic cloves, cilantro (or parsley), salt, lime juice, and a seeded jalapeno. A few swaps you can make – sour cream, less/more lime juice, less/more garlic. For the cabbage, you can either grab a bag of the pre-shredded stuff or chop up your own. No right or wrong there either.

If I’m feeling generous, I’ll top my shrimp burger patties with a dollop of sour cream when they’re done. One of these days I’m going to make this my cheat meal and pop these shrimp burgers on a brioche bun along with the slaw and go to town!

These shrimp burgers are on the weekly rotation. They’ve got lean protein, the hubby won’t mind because it fits into both of our low carb food plans, in the ballpark of 30 minutes to make, and it’s easily customizable to a new flavor every time.

I’m trying that next! 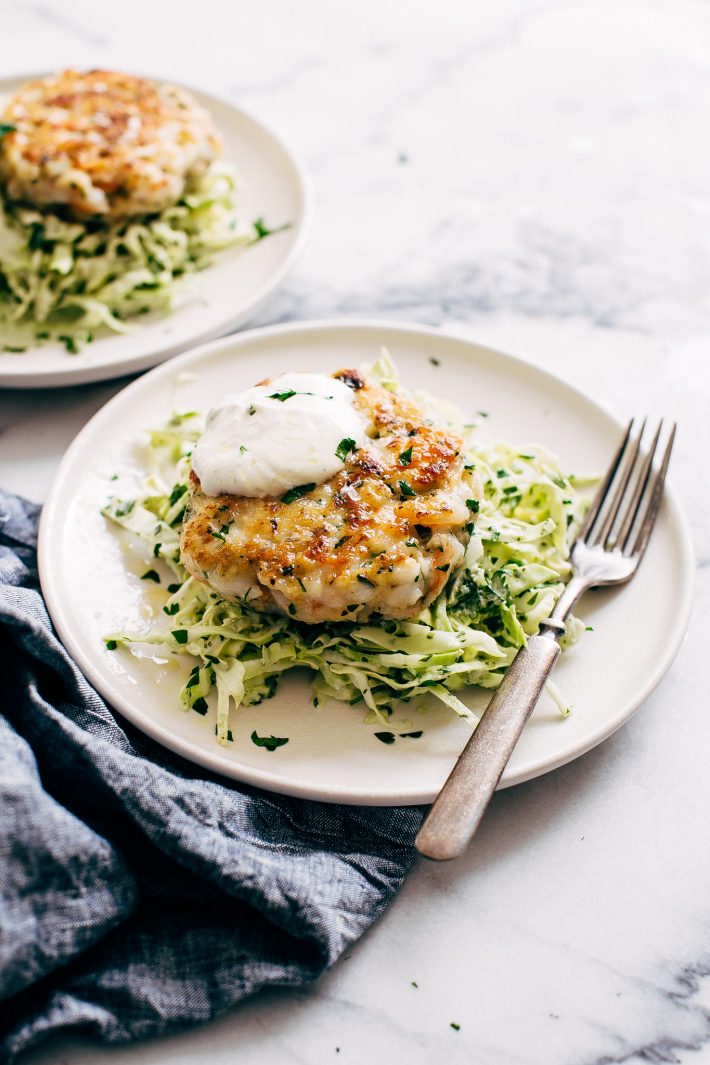 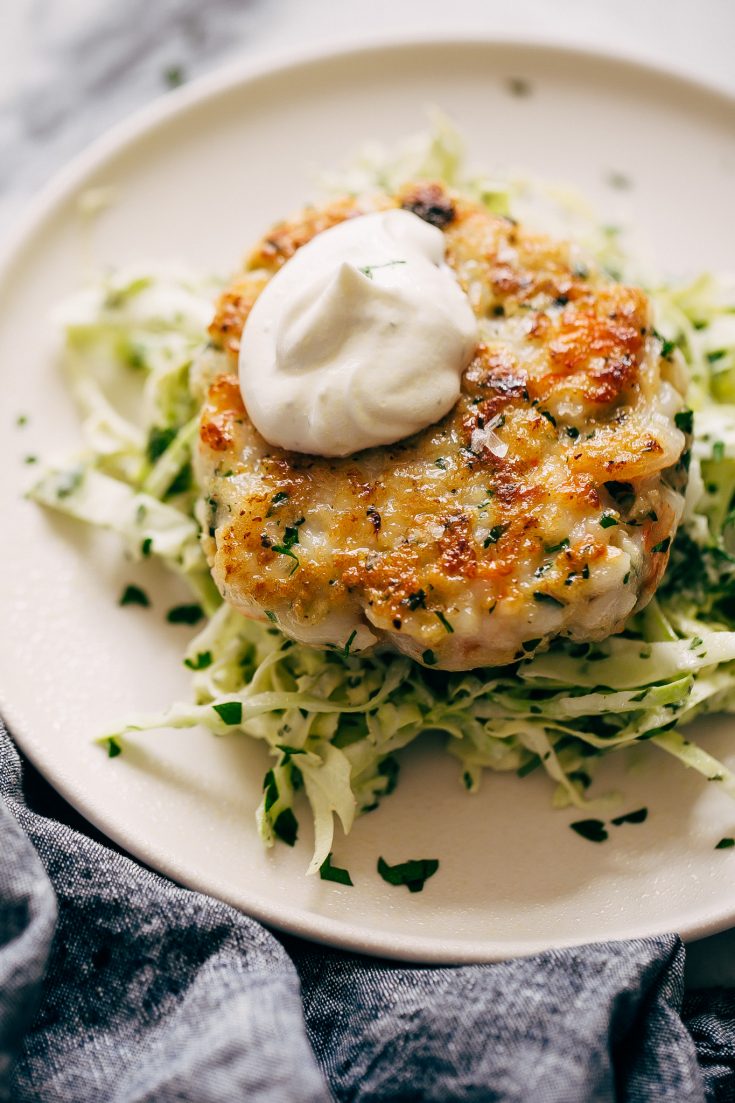