Have you ever seen 3 pounds of potatoes disappear?

POOF. Well you’re about to with these extra crispy roasted potatoes. Buttery soft potatoes on the inside, with a garlicky crispy exterior that will make you want to make a meal out of these babies.

And the best part is it’s just a handful of straightforward pantry staple ingredients that work together beautifully and leave you with crispy herb and garlic outer crust while these potatoes are pillowy soft on the inside! These potatoes are seriously the perfect accompaniment to homemade steak, grilled chicken or any other protein. Crispy roasted potatoes are the perfect side dish for holidays like Thanksgiving, Christmas, or Easter but still simple enough to put together for your weeknight chicken dinner.

I’ve said this many times before, but I wasn’t the biggest fan of potatoes before. And now I love making a big batch of my breakfast potatoes to serve up with scrambled eggs and fresh homemade salsa. I’ve cracked the code on the perfect homemade baked potatoes and don’t even get my started on my sour cream and chive potato salad recipe. Even make a batch of roasted sweet potatoes for bowls and such.

Can you tell potatoes are quickly rising in ranking for my favorite carbohydrate? They’re loaded with nutrition and I’m sad I waited this long to fall in love with them all over again. Homemade French fries with garlic, truffle and parmesan are next on my list.

How to make crispy roasted potatoes:

How to make extra crispy potatoes:

FAQs about this recipe

What kind of potatoes are best for roasting?

I like to use russet potatoes for this recipe. The excess starch in russet potatoes aids in making them extra crispy and crunchy! Waxy potatoes, like red potatoes, Yukon gold potatoes, and fingerling potatoes have a lower starch content and won’t get as crispy.

No, unfortunately, this recipe requires a parboil before you roast the potatoes in the oven. In my recipe testing, I was never able to achieve the same crispy edges if I did not boil the potatoes before roasting them

Is it better to boil potatoes whole or cut up?

For this recipe, I suggest boiling the potatoes once you’ve cut them into pieces. This ensures more surface area on the potato chunk to boil more evening. Larger potatoes won’t cook through in the same amount of time.

Why are my roast potatoes not crispy?

I’d say it’s due to overcrowding the baking sheet with too many potatoes. This will cause the oven-roasted potatoes to steam rather than crisp up. When in doubt bake the potatoes on two baking sheets to ensure even crisping all around. 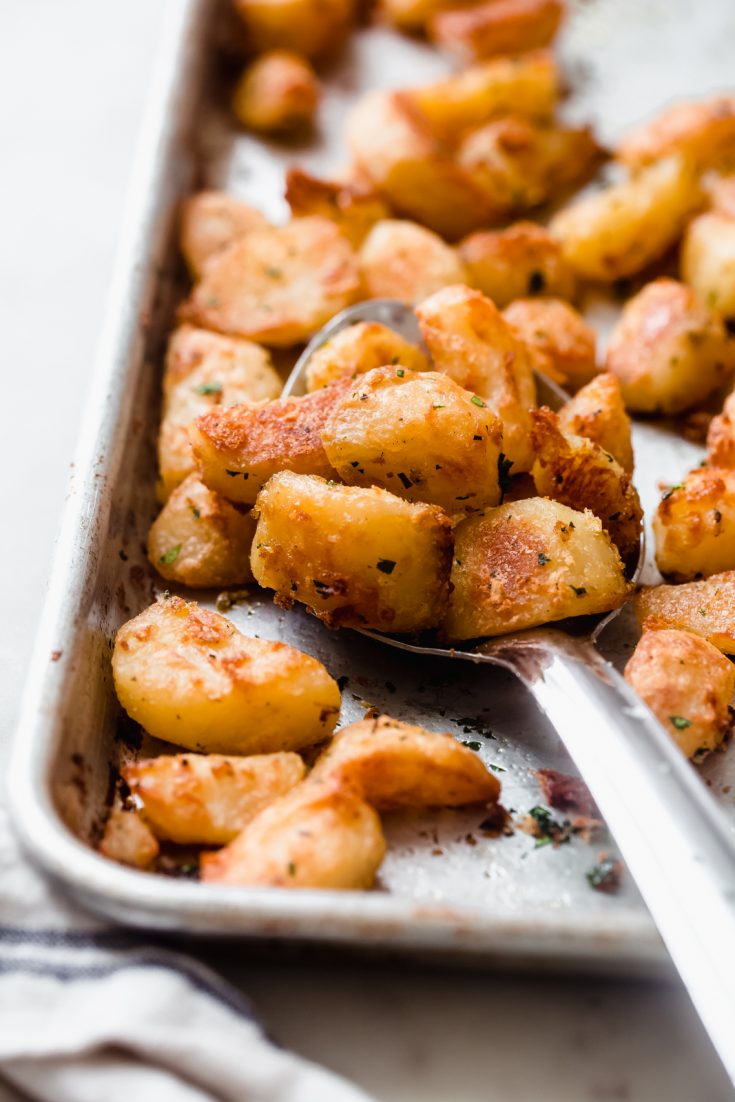