Creamy and comforting Thai inspired chicken coconut noodle soup. This soup starts with tons of fresh ginger, lemongrass, and coconut milk. It’s sure to be a new fall favorite! 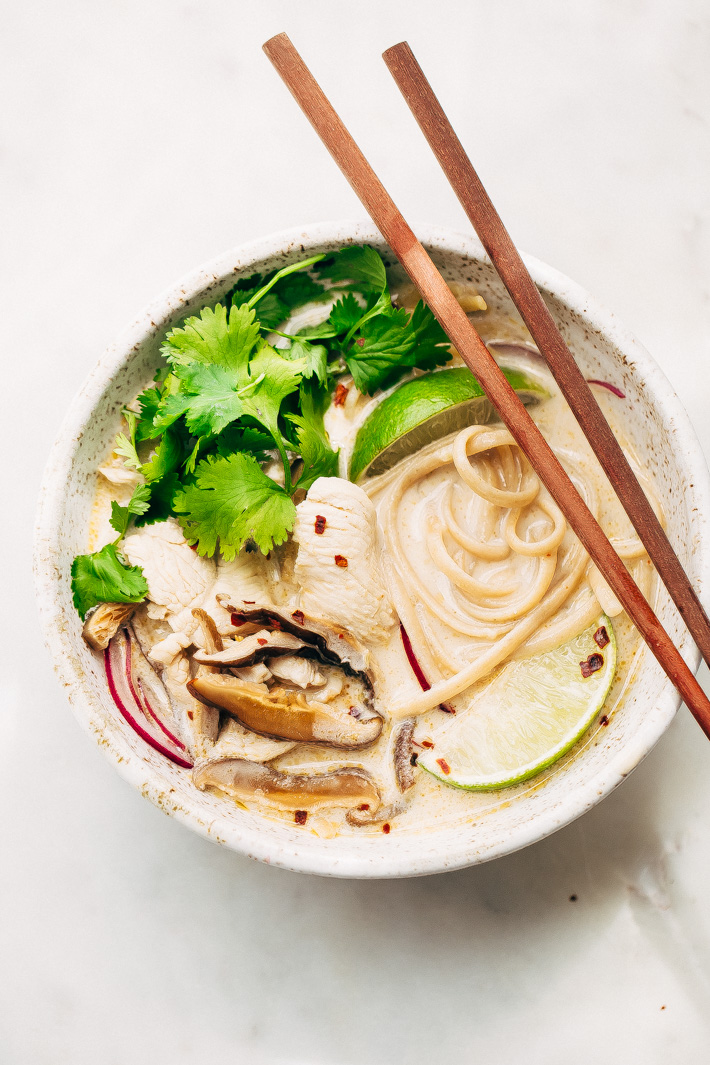 Seriously, thanks to the uncharacteristically cooler weather we have in Houston right now, I’m ready to jump into all things FALL. A giant bowl of the most comforting noodles that are nuzzled up with homemade coconut broth that’s scented with a little ginger and a little lemongrass. Hit me with a squeeze of lime juice right before serving and just sit back and watch those layers of flavor unfold all up in your mouth. Mhmmm.

Step aside regular old chicken noodle soup, we’ve got a new Thai version that’s oh, so much better. This soup is inspired by a local Thai joint here in Houston that is known for its thai food. Back in college it was one plate of pad kee mao noodles with shrimp, medium spice level after every organic chem final that left me wanting to pull my own hair out. That was my order for my entire college life. And here’s a no-shocker, it’s still my order now, but once in a while I’ll be totally spontaneous and order it with chicken. A couple friend of ours suggested the Hot and Milky soup one evening, and I would be lying if I said I wasn’t skeptical. Milky soup? Thankfully, it tastes a lot better than it sounds. It’s seriously this beautifully rich, sweet and tangy party that’s waiting to happen in your mouth. I’ve added noodles to soup and toppings because both are essentials for a more satisfying meal. 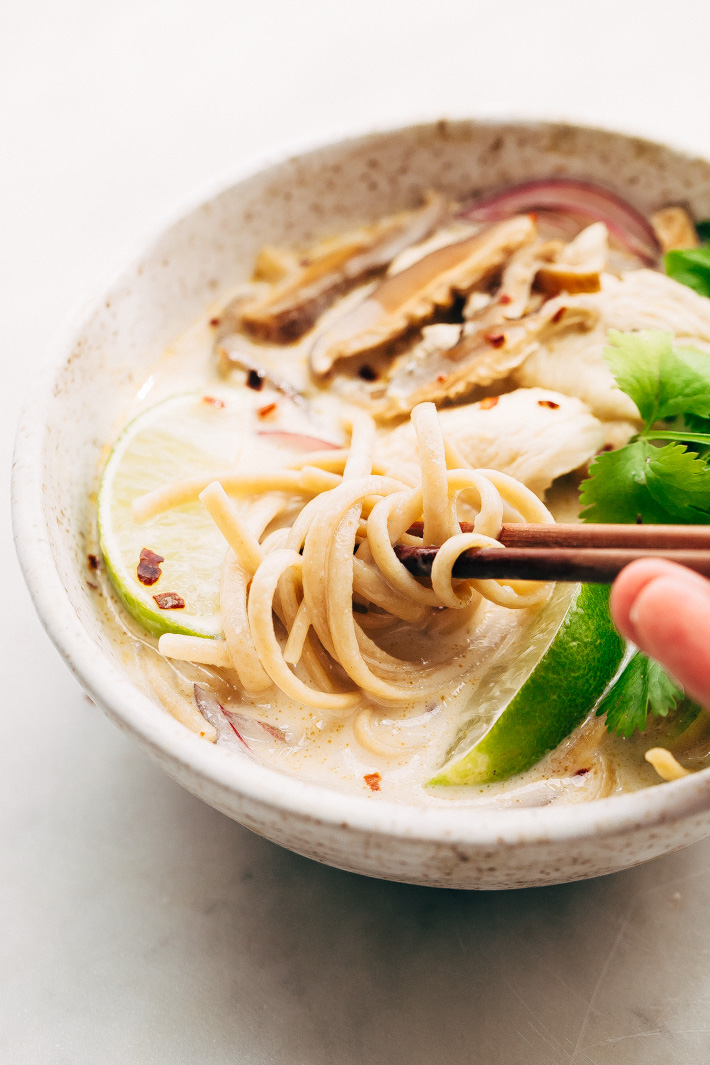 I’ll take this opportunity to point out that I don’t think there’s such a thing as Thai chicken coconut noodle soup, or is there? Someone school me. This is just my take on an east meets west type of meal that results in tender coconut simmered chicken, umami overload from the shitakes, and chewy noodles. East being a traditional Thai Tom Kha Gai soup and the west, why chicken noodle of course!

What I’m basically trying to say is that this coconut noodle soup is for those of us that don’t mind the lack of authenticity and really just NEED an excuse to down a bowl of coconut//lemongrass//ginger scented broth and load up on all your favorite toppings.

Um now that I think of it, this sounds an awful lot like Thai Coconut Ramen?

Sure, let’s go with that. 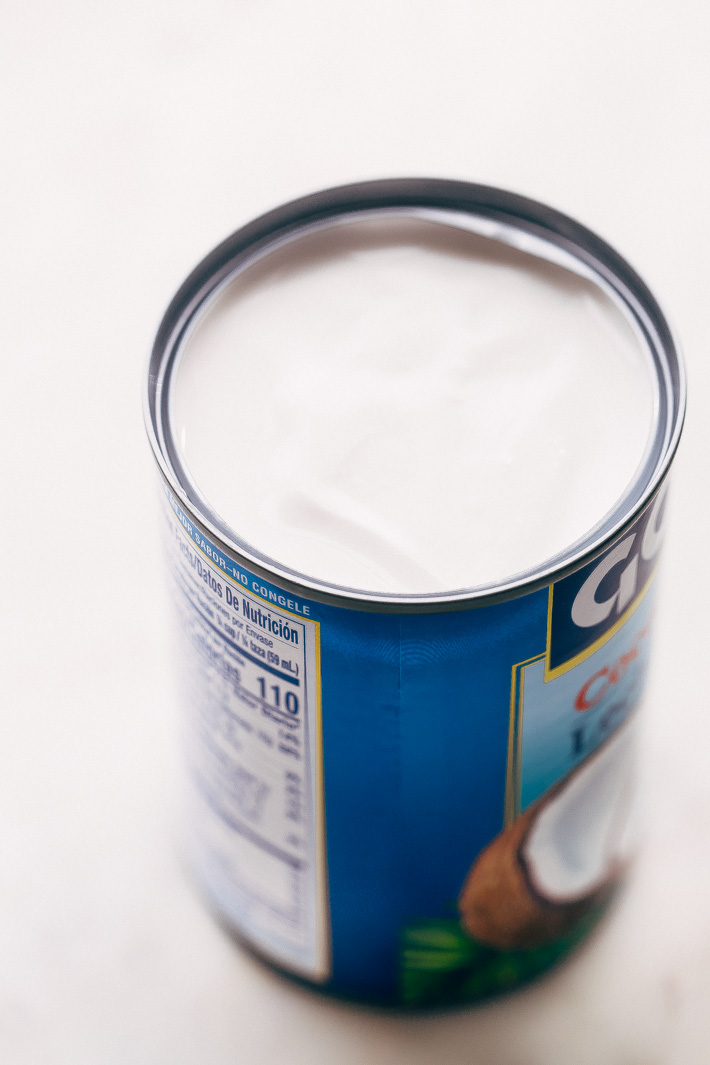 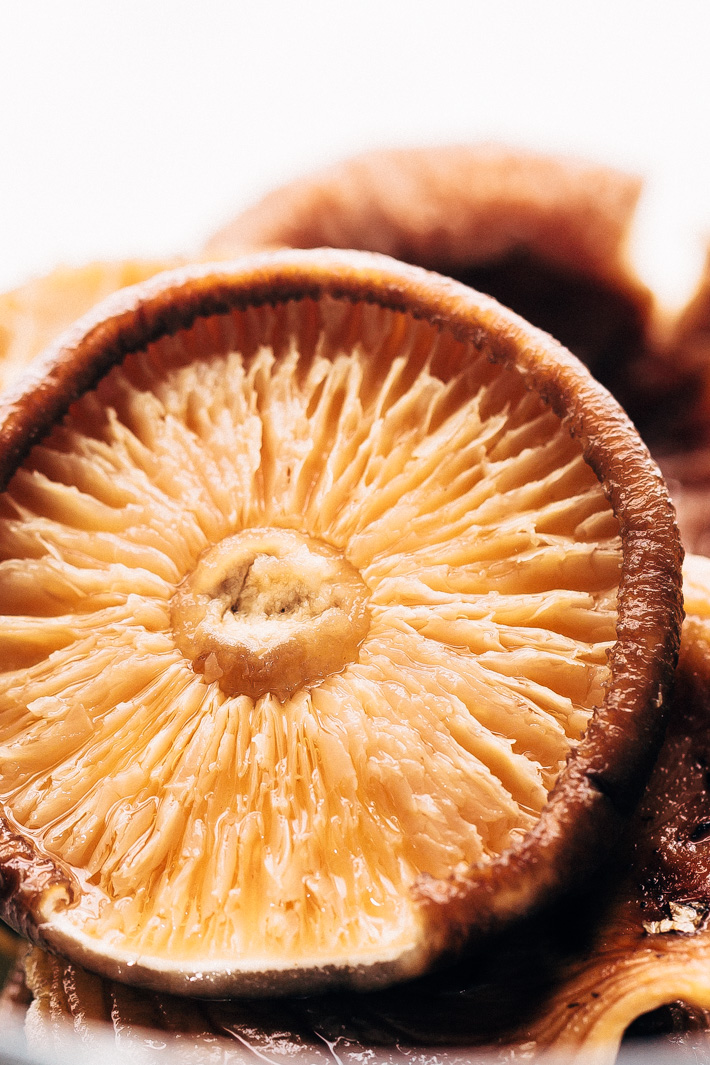 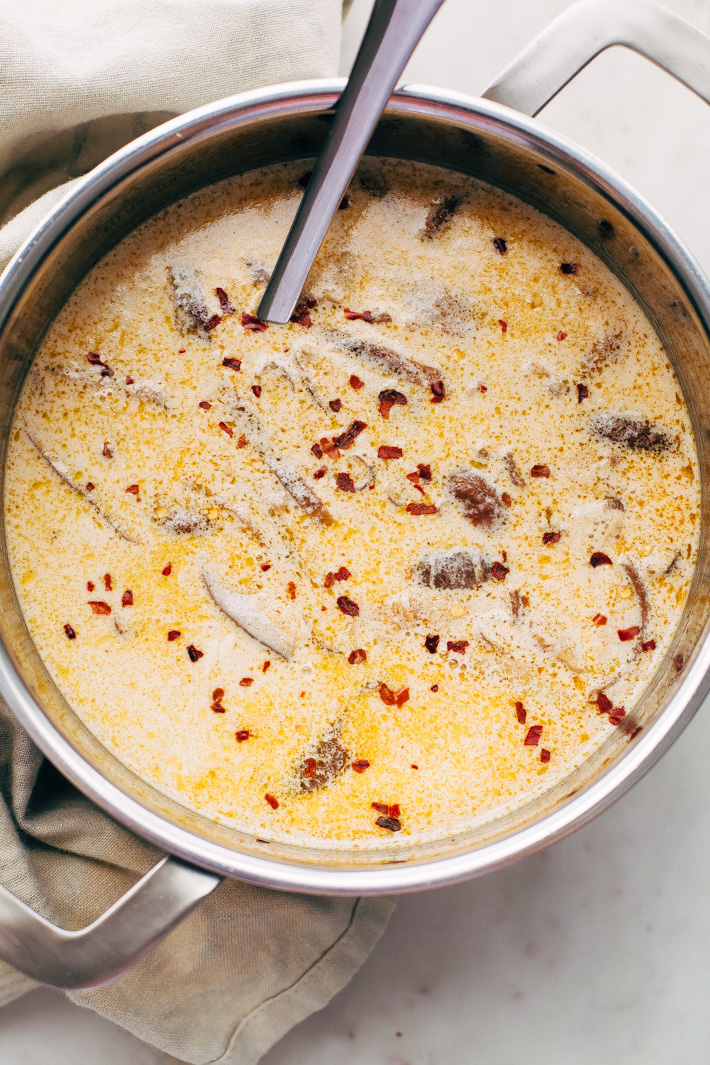 Chicken Coconut Noodle Soup starts with some regular old chicken broth. Two things: use one that’s good quality because, why wouldn’t you? And secondly, use low sodium. We’re going to saute a little grated ginger, lemongrass, and red curry paste in coconut oil then add the chicken broth and let it reduce down to half its original volume. Concentrating this bad boy will give that coconut soup more body.

Once that’s done, we’ll add thinly sliced chicken breasts and let them poach in that chicken broth. And finally, we’ll hit it with that coconut milk, fish sauce, sugar, and lime juice. 40 minutes that are well spent making out of the box comfort food, like this soup.

Noodles: Okay so I think rice noodles will probably lend more ‘authenticity’ to this coconut noodle soup. But really, if the soup isn’t authentic itself, who am I to even judge? I’ve used whole wheat linguine, and it’s worked out fine. Udon noodles are another great alternative. And soba? Haven’t tried those yet but there’s always tomorrow! 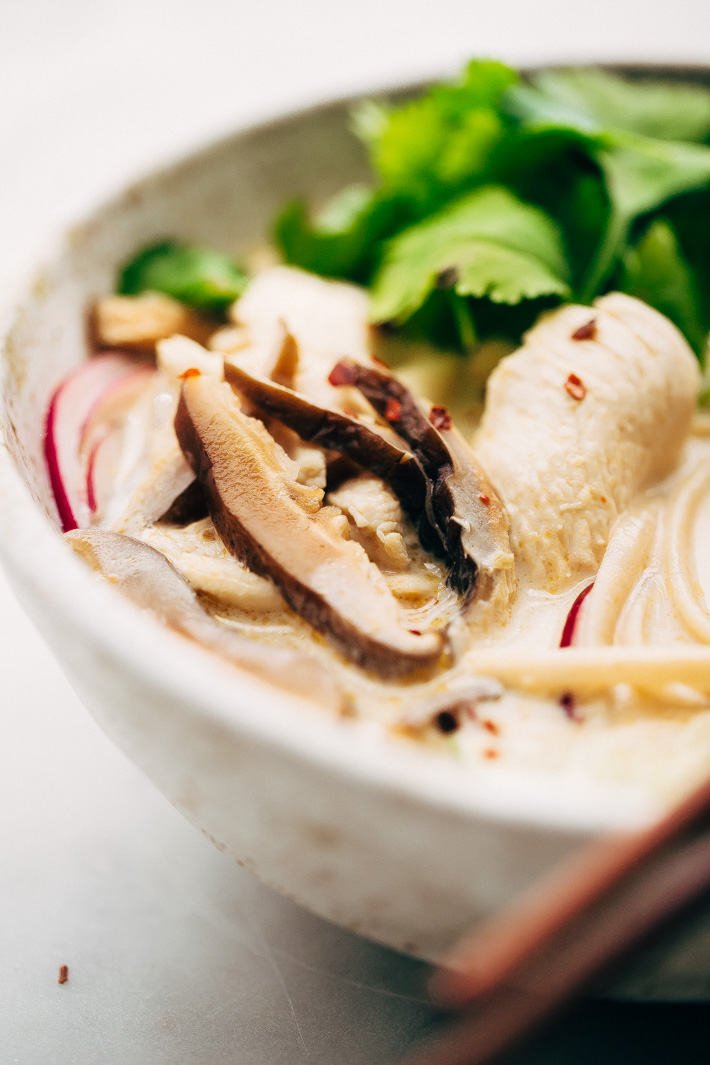 Final words, this recipe is simple. The coconut milk broth is delicate and light on the spice. If you’d like to amp up the spice level a little bit, I suggest a dash of red pepper flakes when serving or you could double the red curry paste. Keep in mind doubling the paste may result in a darker broth than what’s pictured.

My goal was to get this coconut noodle soup up on the blog early in the season because I hope that you’ll make this at least once a week the way I plan to! 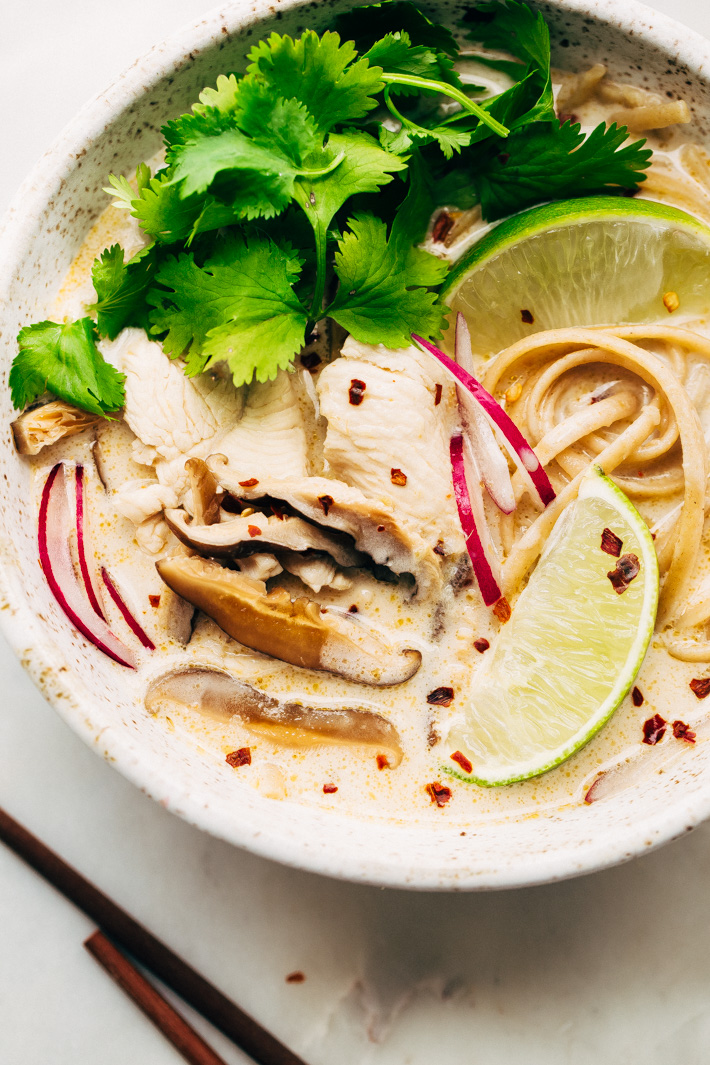