Quick and easy blackened shrimp tacos recipe! The seasoning on these shrimp tacos is so good when you combine it with seasoned smashed avocados and fresh slaw! 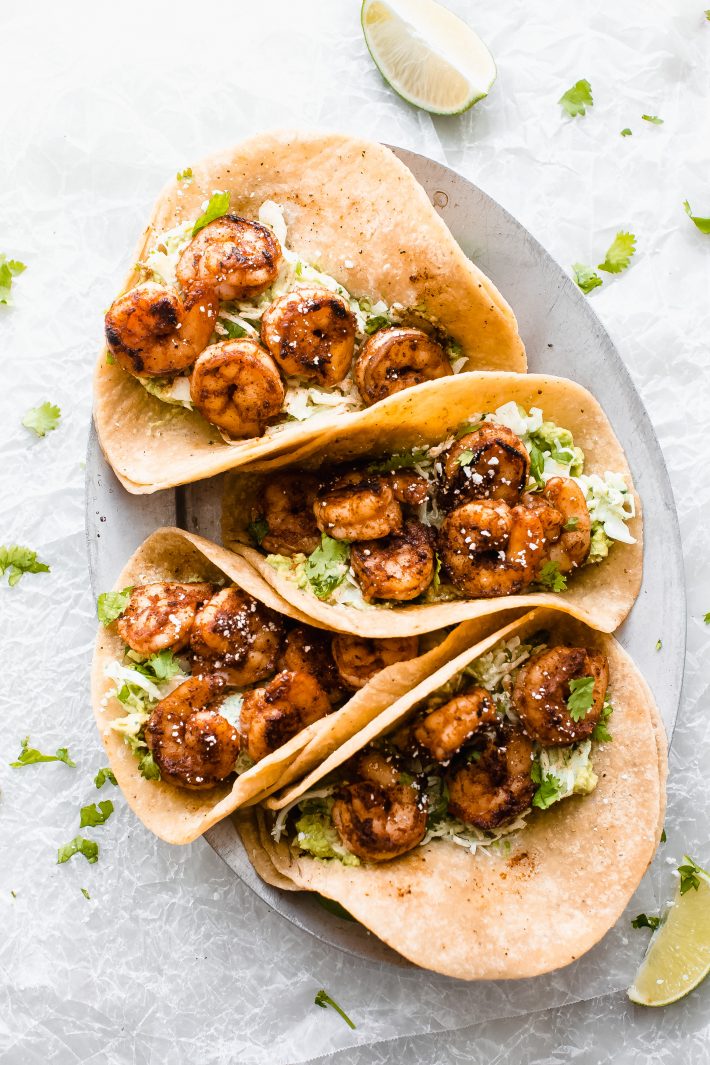 These blackened shrimp tacos were the first thing I made for us after we moved into our temporary apartment while we’re waiting on our new house to finish up.

I’m not gonna lie, going from a house back to an apartment has been an interesting transition. Without my full array of spices (which are kept away in storage), I’m forced to use just a few select seasonings for my recipes. To give you an idea of how many I’ve brought with us, I’ve used almost all of them in this recipe. If only there was a number or some kind of score attached to how many I can use in a recipe, this would totally max it out!

After a bit of scouting, I realized that the local grocery store sells an array of spices from around the world by the ounce, so I can always run and grab what I need. So don’t worry, even in my temporary condition, I’ve got the seasonings and flavors covered. 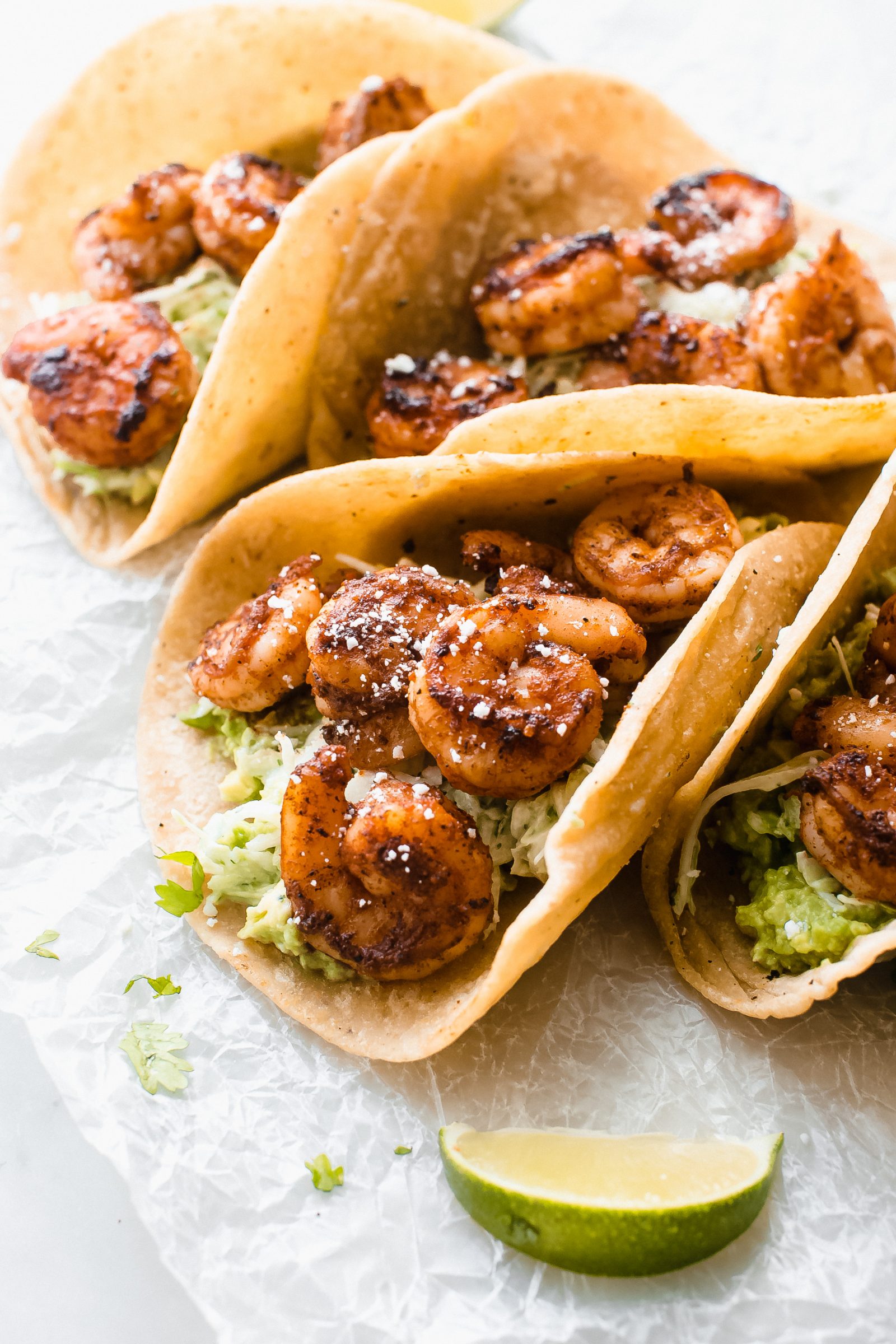 Blackened shrimp tacos! What is there not to love? You’ve got a little heat, a little sweet, and a little savory from the shrimp. It comes together with a creamy, cool jalapeño lime crema that is as simple as tossing everything into a food processor and giving it a whiz. Then there’s crunch from the angel hair shredded cabbage and buttery smashed avocados round out all those yummy flavors.

The recipe is simple, which is just what I need since I’m working out of a tiny, tiny kitchen. Just toss a bunch of seasonings on to the shrimp and allow it to marinate while you make the crema for the slaw. Then, it’s as simple as stuffing everything into a warmed flour or corn tortilla and serving it up. 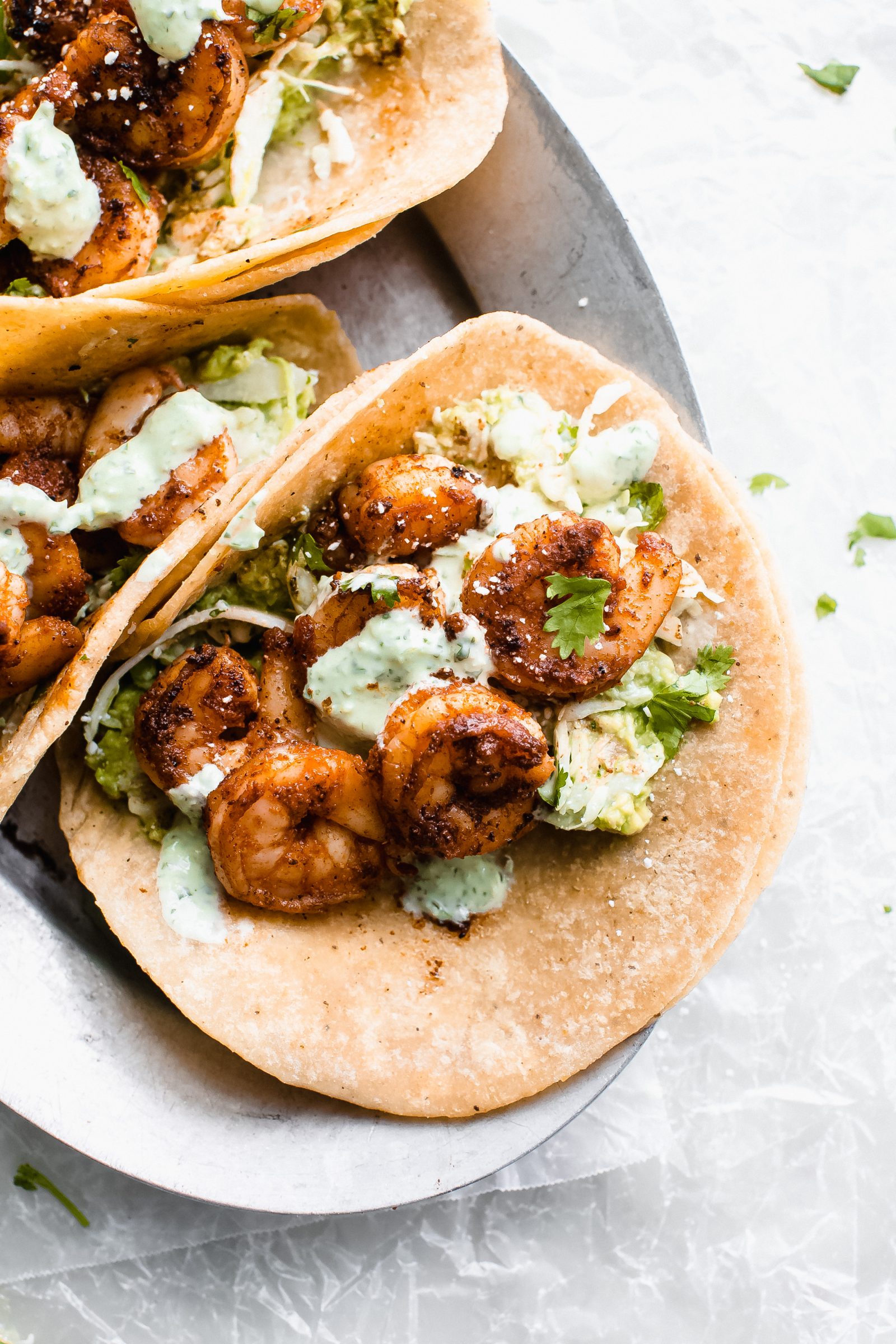 What seasonings do you need to make the blackened shrimp tacos?

How to cook the shrimp for blackened shrimp tacos: 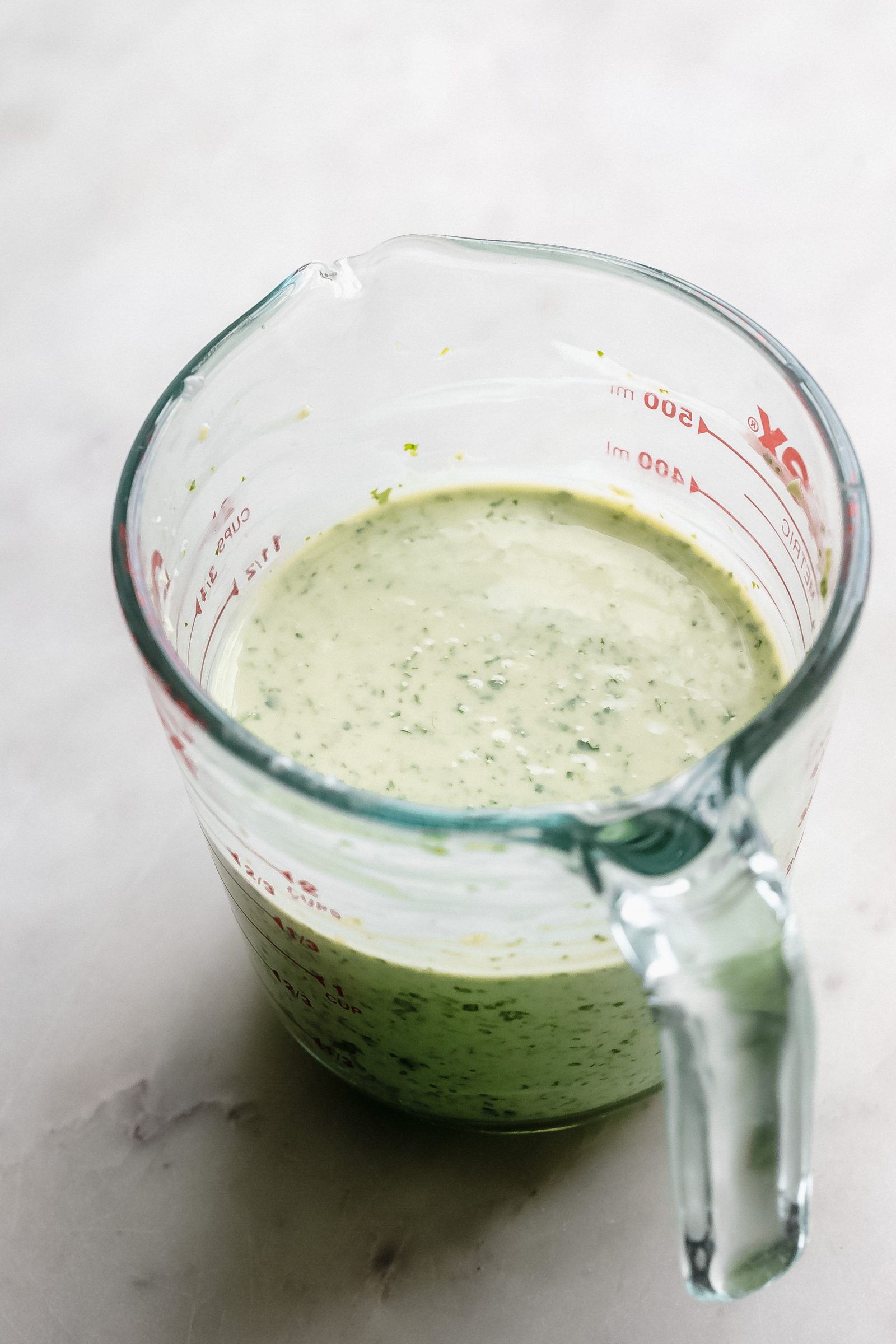 What do you need to make the jalapeno lime slaw?

How to make the jalapeno lime crema:

It’s really simple to make the jalapeño lime crema that we toss with the shredded cabbage in. 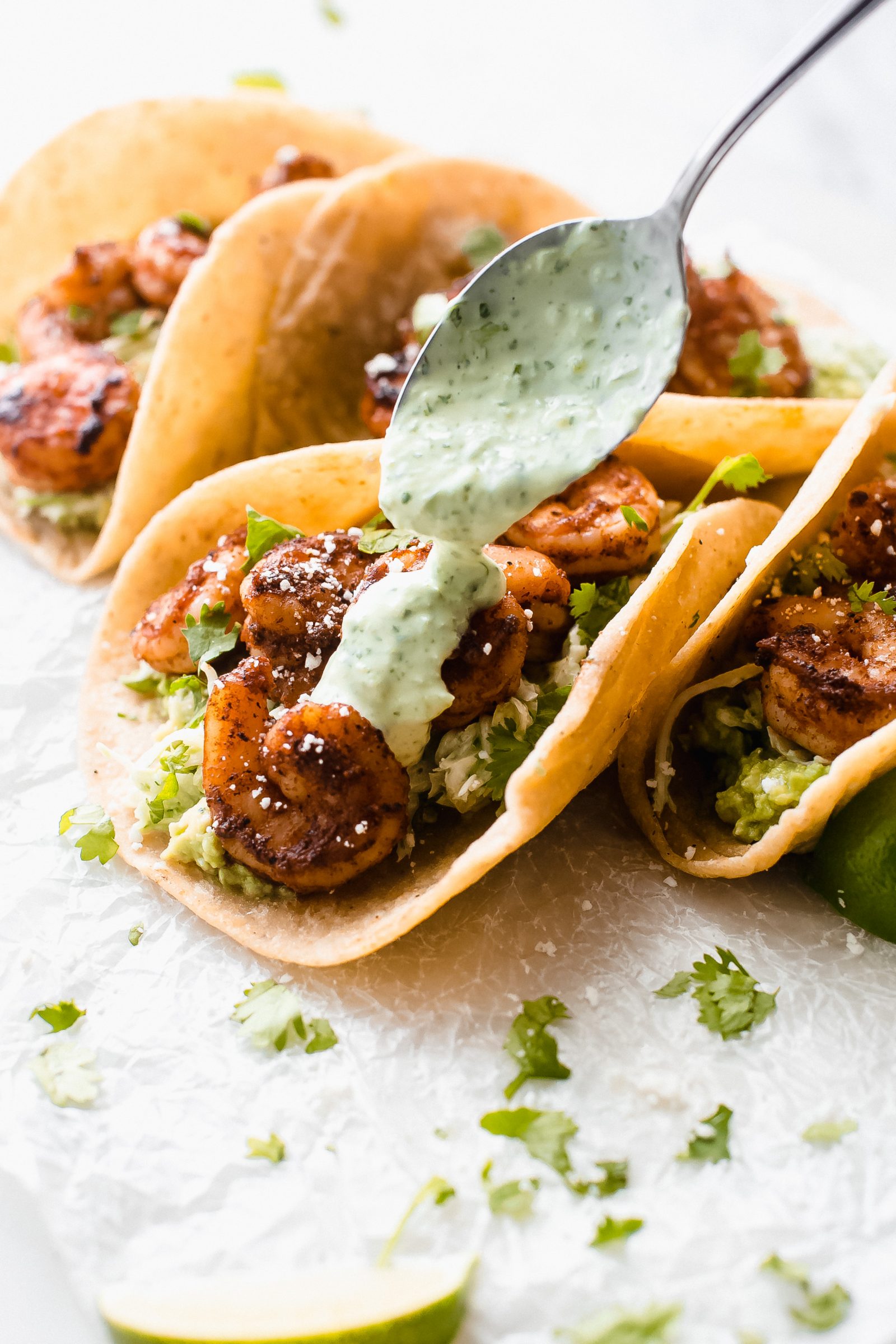 What’s in the smashed avocados?

The smashed avocados elevate these tacos a little bit more! I like to smash a large avocado in a bowl and season it with a dash of garlic powder (to taste) along with a two teaspoons lime juice and a pinch of salt. You can add cayenne too if you’d like to heat things up a bit!

Do I have to season the avocados or can I serve them sliced?

Nope! Not at all, you can simply slice or dice the avocados and add them to the tacos as well. I smash and season them as it adds another level of flavor, however, this isn’t a make it or break it component!

If you’re looking for other taco inspirations, you might also like ancho chicken tacos, Mexican street corn tacos, mojo steak tacos, or even my beef fajitas!

I know it’s a day early for Taco Tuesday, but is it ever too early in the week for tacos? 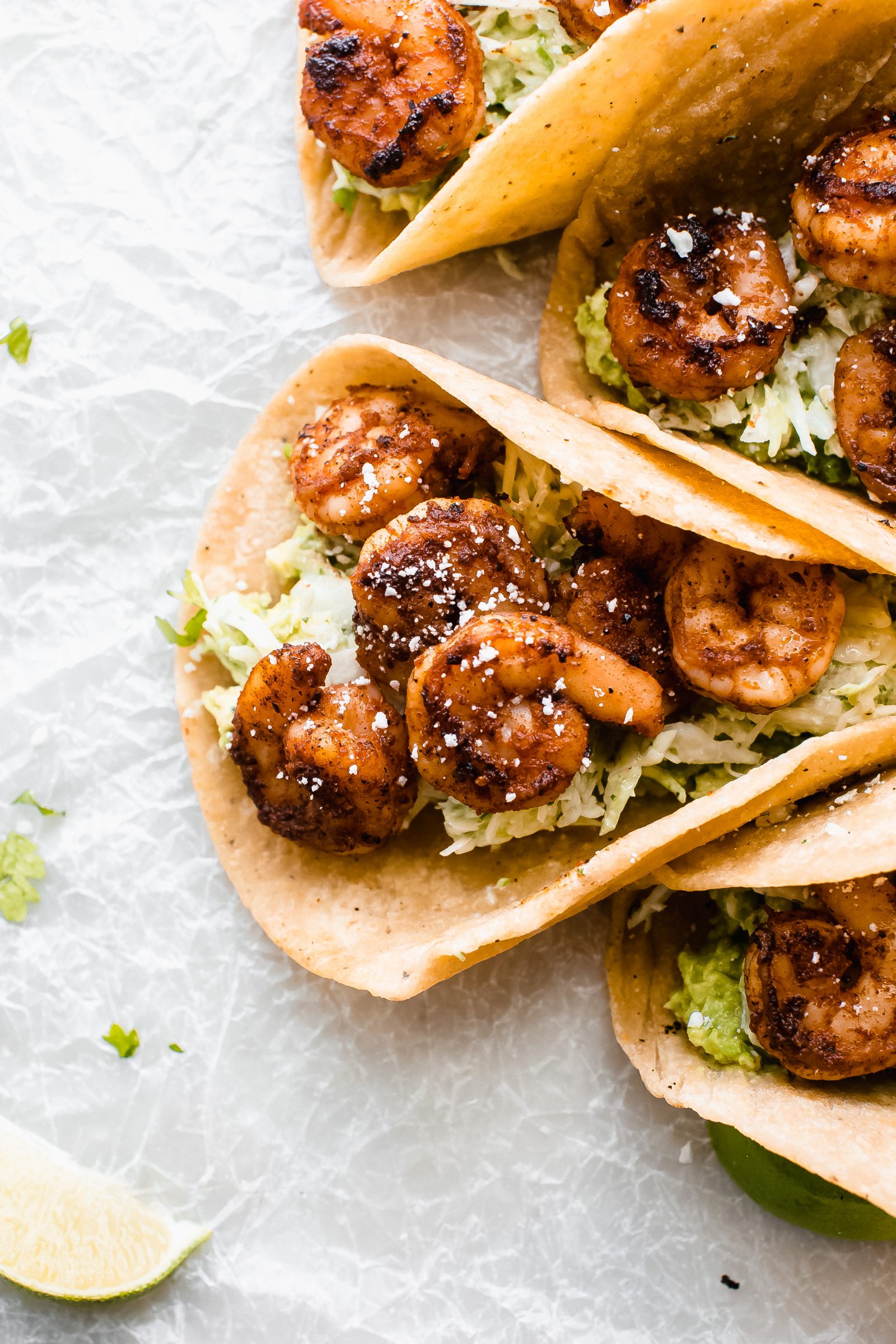 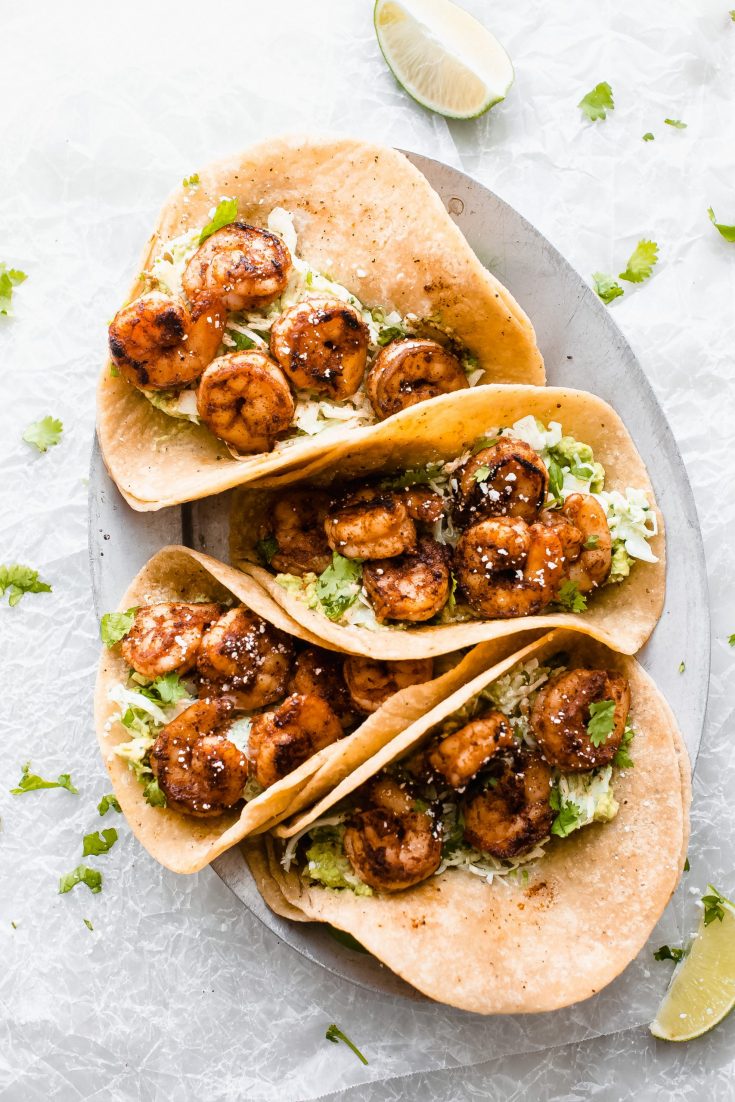 9 comments on “Blackened Shrimp Tacos with Smashed Avocados and Slaw”