A delicious summer Panzanella salad loaded with crispy bread cubes, juicy tomatoes, fresh basil, and the most delicious dressing! You can customize it with pretty much any vegetable you like! The best way to eat up summer’s bounty!

A combination of summers’ most delicious bounties all come together in one bowl! We start with juicy, ripe, fresh tomatoes. Then we’ll crisp up garlic-infused bread, and toss it all in a light and refreshing oil and vinegar dressing.

It’s the perfect salad to serve if you’re looking for something fresh and flavorful to serve alongside roasted shrimp, fish, or chicken.

Traditionally, a Panzanella salad consists of thinly sliced onions, tomatoes, and stale bread. But I’ve bulked it up with a select few ingredients that pair well with the other flavors in this tomato and bread salad.

What is a panzanella salad?

A Panzanella salad is a Tuscan inspired chopped salad made with stale cubed bread, tomatoes, and fresh basil. The dressing for this salad is a simple combination of oil and vinegar mixed with salt and the juices from the tomatoes.

What ingredients do you need to make summer panzanella?

How to quickly make fresh bread stale for a recipe:

Suppose you don’t have stale bread on hand. You can easily make fresh bread stale by baking it in the oven after you’ve cubed it. Place the cubes on a baking tray – no need to spray it with oil. Allow bread cubes to toast and dry out for 10 minutes on 350ºF. Then you can proceed with the recipe as if you had stale bread all along.

How to make the most delicious panzanella salad:

Why do you start in a cold pan with cold oil and garlic?

Starting in a cold pan allows us to infuse the garlic flavor into the olive oil. Really take your time here; you don’t want the garlic to burn. Heat it through on the lowest heat setting, and once the garlic starts to sizzle, you can add in the bread cubes.

What is the best kind of pan to use for crisping up the bread?

I suggest using a nonstick pan when you’re frying up the bread. I find that the cheese melts and sticks to the pan if you use a stainless steel pan. It’s rare that I make this recommendation, but I did find it super tricky to maneuver when I used a stainless steel pan. This is the pan I used, works beautifully!

If I’m using cherry or grape tomatoes, do I still have to slice them? Can’t I just use them whole?

What can I serve with this bread and tomato salad? 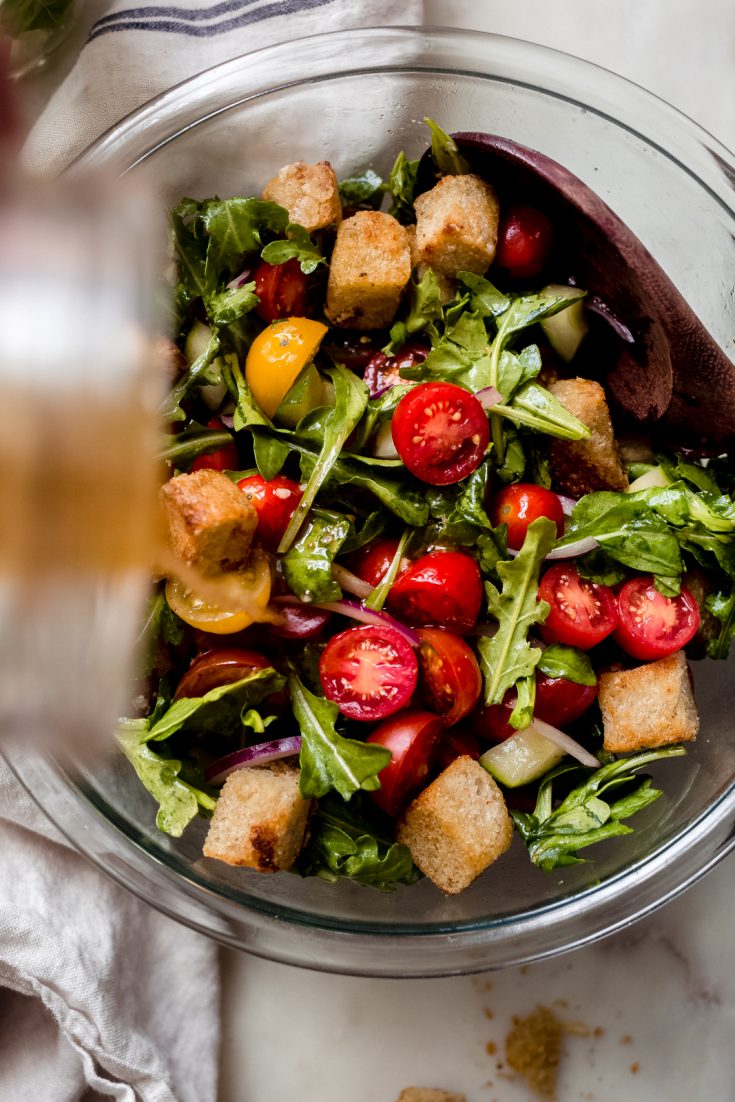 6 comments on “The Best Summer Panzanella”