How to Make Crostini

Learn how to make crostini at home with this simple, 3-ingredient recipe! These crisp, golden little toasts are perfect to serve alongside your favorite party dips, appetizers, or on a cheeseboard!

Today I want to show you how to make crostini – one of the easiest, 3-ingredient recipes that elevate any and everything you serve it with.

I mean, at this stage of life, most people can combine a few ingredients and make a dip, but when you say you made homemade crostini to pair with your dip, you automatically earn brownie points.

Crostini? You made crostini?

Honestly, it’s a lot fancier sounding than the amount of energy required to put it together. And if there’s anything we love, it’s a recipe that sounds fancy but requires minimum work! All you need to do is slice up a store-bought baguette or ciabatta baton and pop it on a sheet pan. Drizzle with olive oil and sprinkle with flakey sea salt. If you want to get really fancy, bust out a little smoked sea salt or rub with a cut clove of garlic when the crostini is hot out of the oven.

The prep time on these is minimal, but the results are amazing!

Instructions for How to make Crostini

FAQs about this recipe:

Can you grill crostini?

Definitely! Heat a grill pan over medium-high heat. Drizzle (or brush) the sliced bread with olive oil on both sides. Place the bread on the grill and crisp the bread through, about 1-3 minutes or until the first side has grill marks. Flip and cook the other side. Immediately rub with the cut side of the garlic clove if desired.

How do I make my crostini not hard?

If you want the crostini to be crisp around the edges but still softer in the center, you can bake the crostini for roughly half the time and then broil it for 30-45 seconds under the broiler. Broiling helps brown it quickly and won’t dry out the center of the bread as much.

Is crostini and baguette the same?

Crostini is thinly sliced and toasted white bread. A baguette is often used to make crostini.

What is the difference between crostini and bruschetta?

Bruschetta is wide cuts of sourdough or rustic Italian bread that is grilled or baked. Crostini is usually smaller pieces of bread, and most often, it’s white bread or french-style bread.

How do you store leftovers?

Keep the crostini in an airtight container at room temperature. Use within two days!

What to serve with crostini 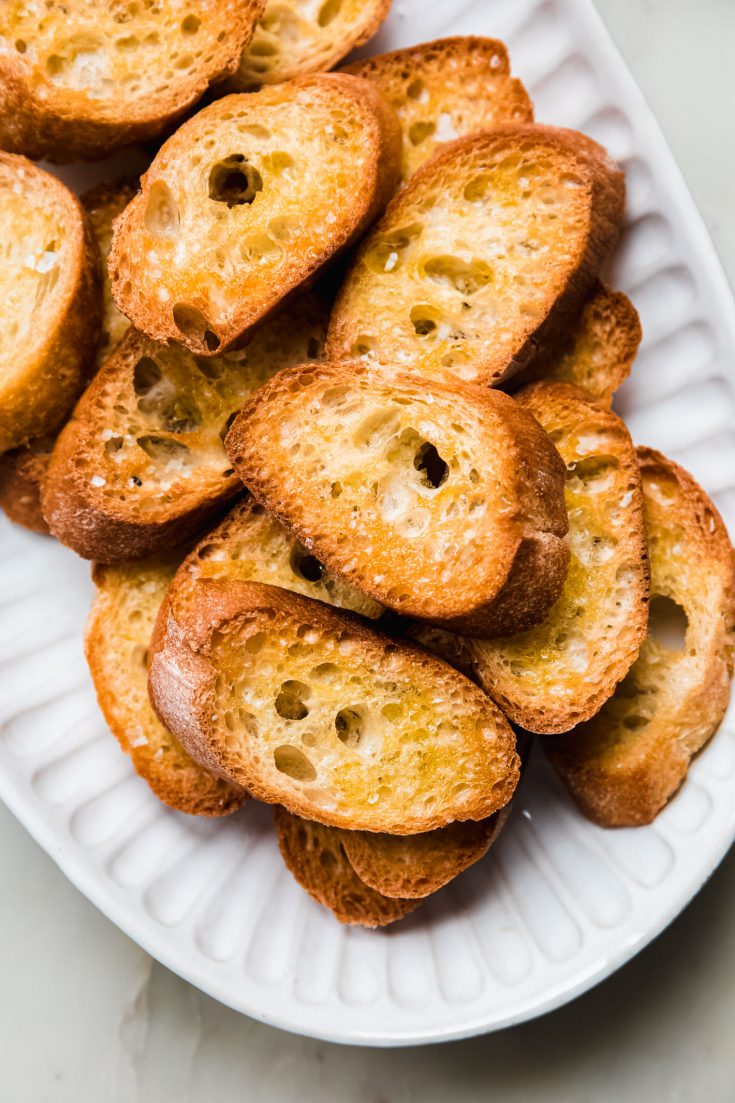