Cinnamon roll blondies are so addicting! It’s a chewy blondie base, swirled with cinnamon sugar and topped with a tangy cream cheese icing — just the way a good cinnamon roll should be! 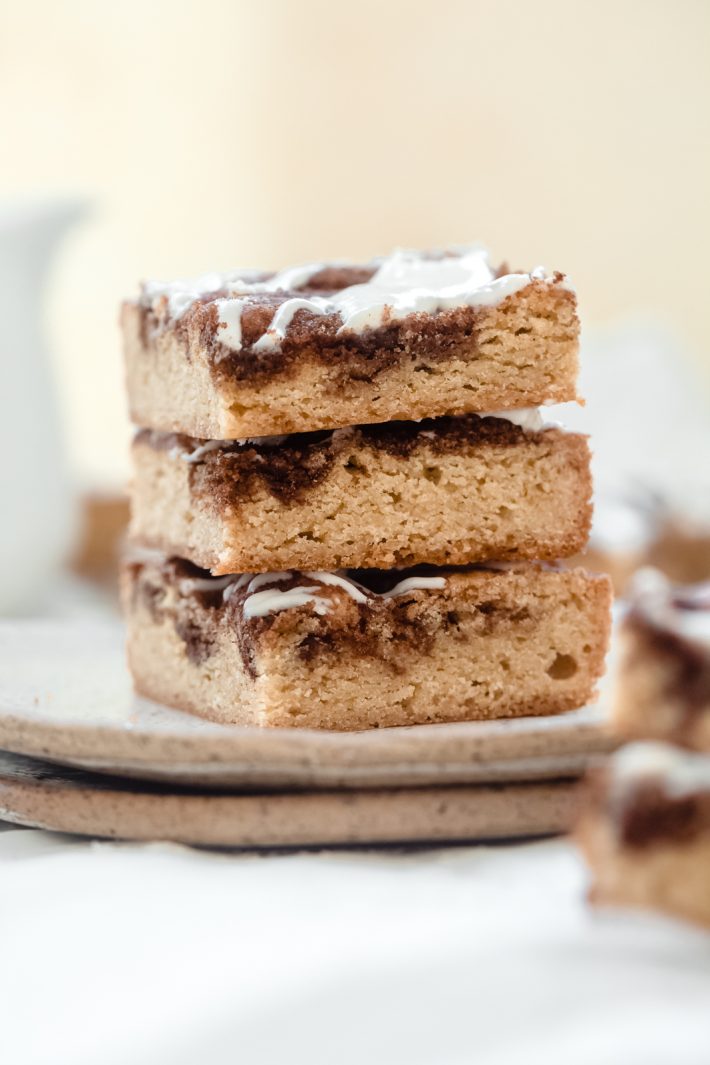 Hold the phone — I think I just made the most addicting blondies of all time.

These are the holiday treats your family and friends are sure to lose their minds over. I mean, sure everyone loves a good pecan or pumpkin pie, I’m the first one in line when it’s dessert time. But you know, someone is always going to bring one of those to the Thanksgiving or Friendsgiving table. But these? Chewy, addicting, crunchy, cream cheese icing topped cinnamon swirled blondies? They’re something new, they’re handheld, and they are addicting.

I mean, I knew I had a winner when I balanced out the sweetness in these bars with a generous pinch of sea salt. But then I went ahead and topped them with a tangy cream cheese frosting that takes these straight from a 10 to a 15 on my dessert scale. The secret to making addicting chewy blondies is melting the butter and allowing it to mix with the sugar, that’s what we do here, and that’s what makes these the chewy cinnamon roll blondies with a surprise little crunch from the cinnamon-sugar. Trust me when I say this when you take a bite, you get it; you understand why I say you can’t stop eating them.

Be still my cinnamon-sugar loving heart. 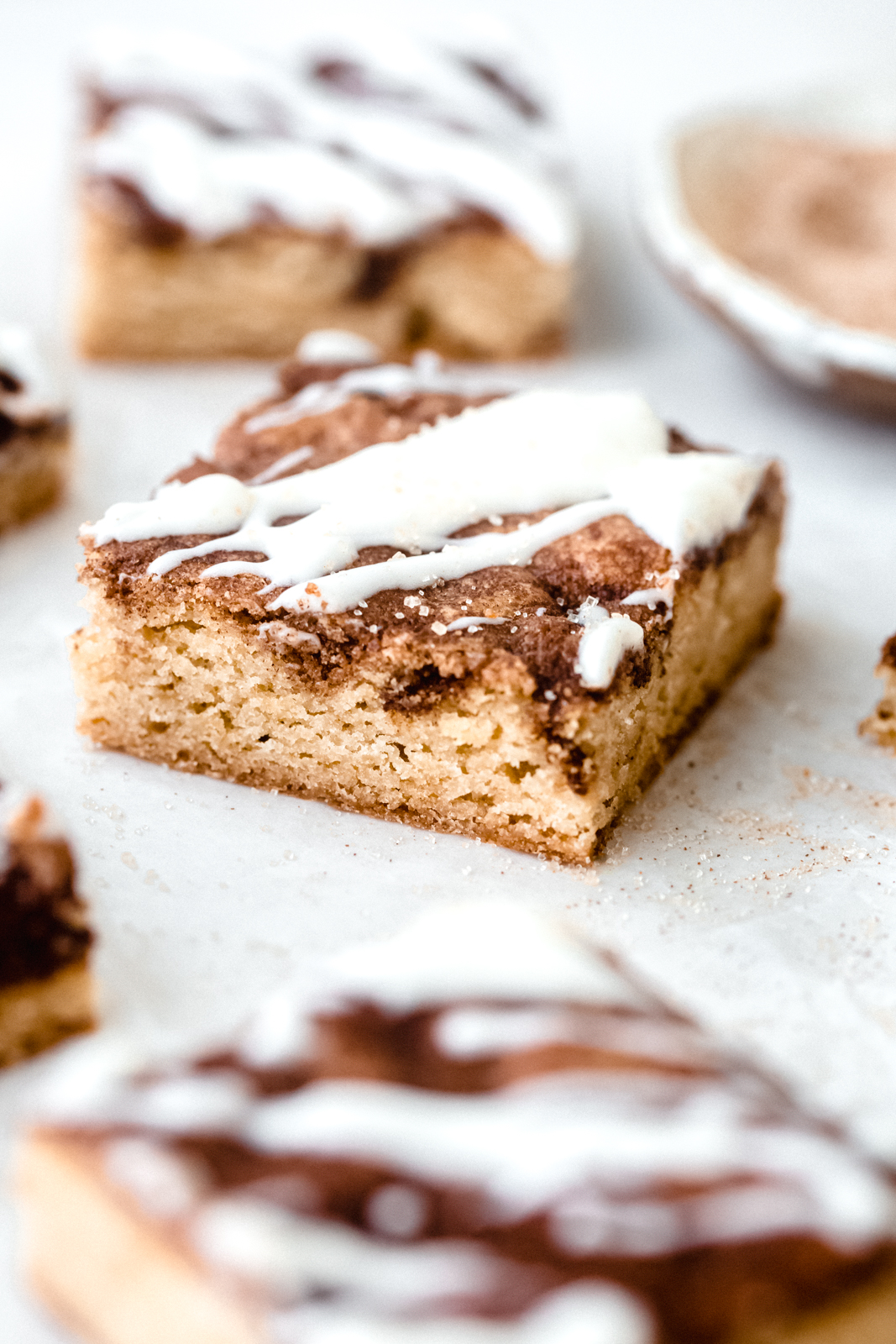 I’ve embraced all the cinnamon-sugar goodness this year. Have you had a chance to try out my pumpkin snickerdoodle muffins? They’re super tender muffins topped with a crunchy cinnamon-sugar topping, and I’m telling you, they disappear super fast. But then it got me thinking, what other unexpected desserts can I add cinnamon-sugar to? And I kid you not, the idea for these cinnamon roll blondies was born.

Would you be surprised to know that I’ve already run out of my first container of cinnamon, and we aren’t even knee-deep into the season yet? But I’ll tell you what? I’m not mad about that.

My hips? That’s a story for a different day. 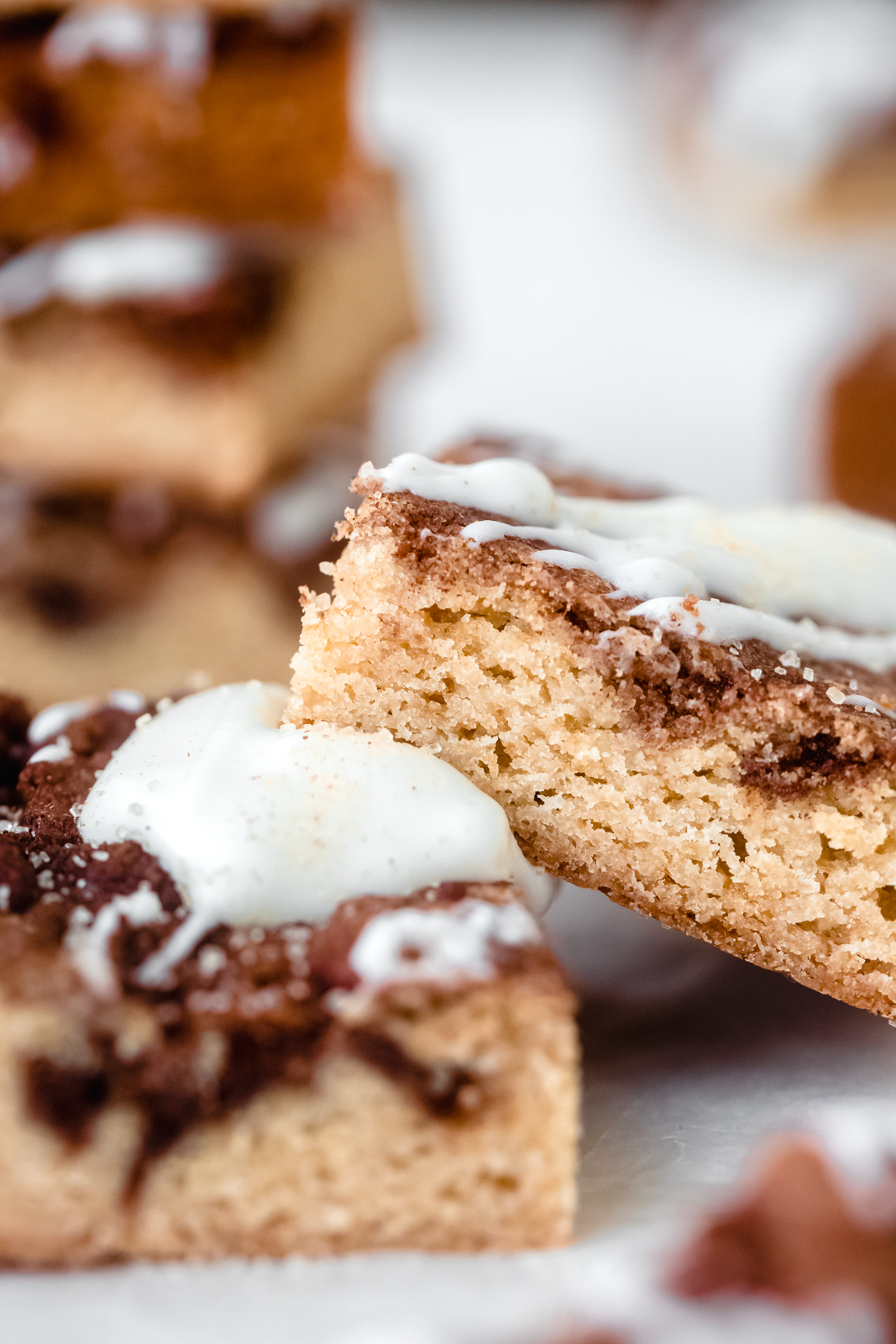 What do you need to make cinnamon roll blondies?

How do you get that cinnamon sugar swirl? 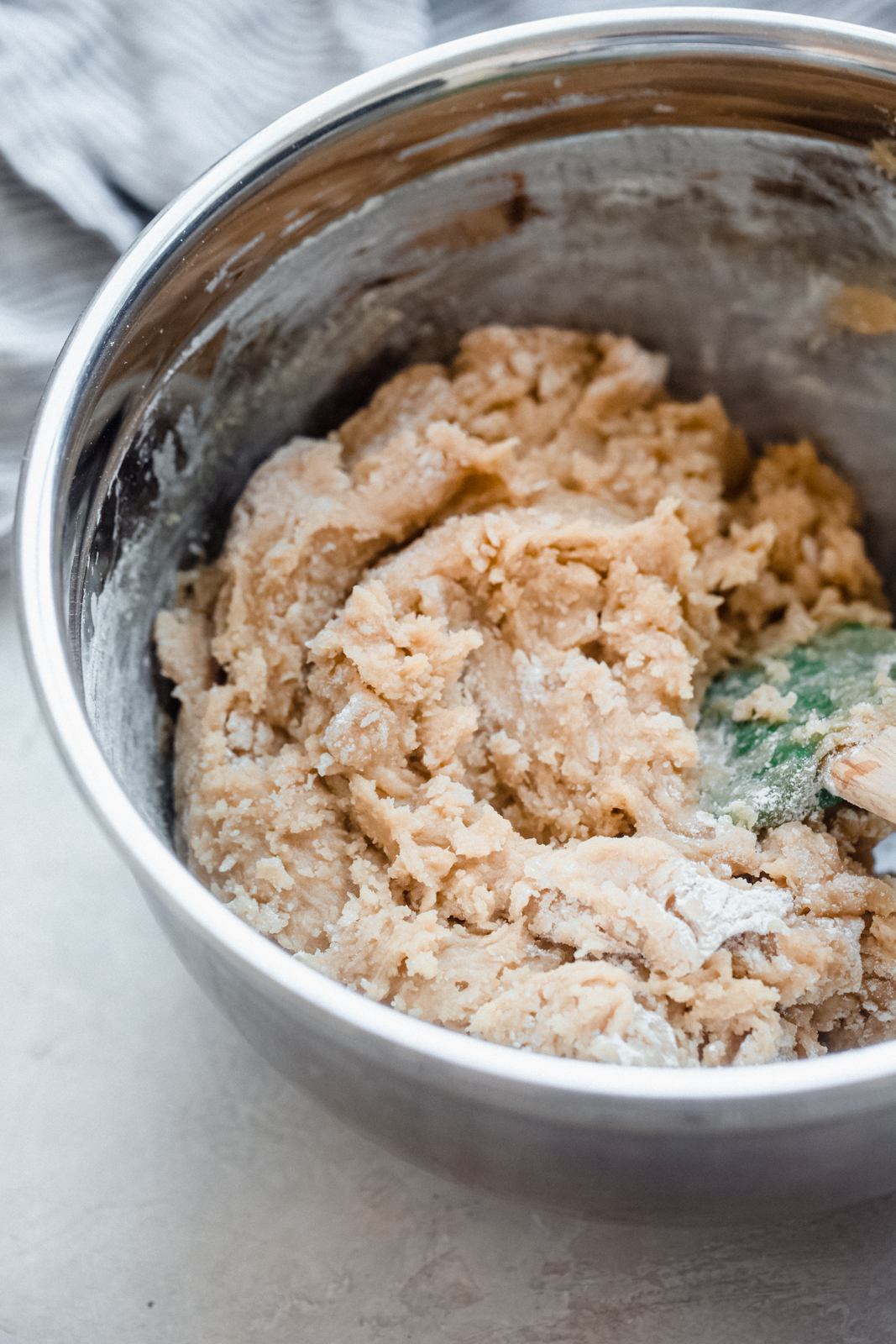 What is in the cream cheese icing for these cinnamon roll blondies?

Can I leave off the icing if I don’t want to include it?

You can, but please note that the cinnamon roll blondies might be a little too sweet. The amount of sugar in the bars is nicely balanced when you top them with the icing; they aren’t cloyingly sweet that way as the tang from the icing balances it all out.

How to make cinnamon roll blondies:

It’s pretty simple and straightforward to make cinnamon roll blondies; in fact, you can even make them without a mixer!

How long will these cinnamon roll blondies last?

At room temperature, they’ll last about 3-4 days. We, however, never had a batch that lasted that long! 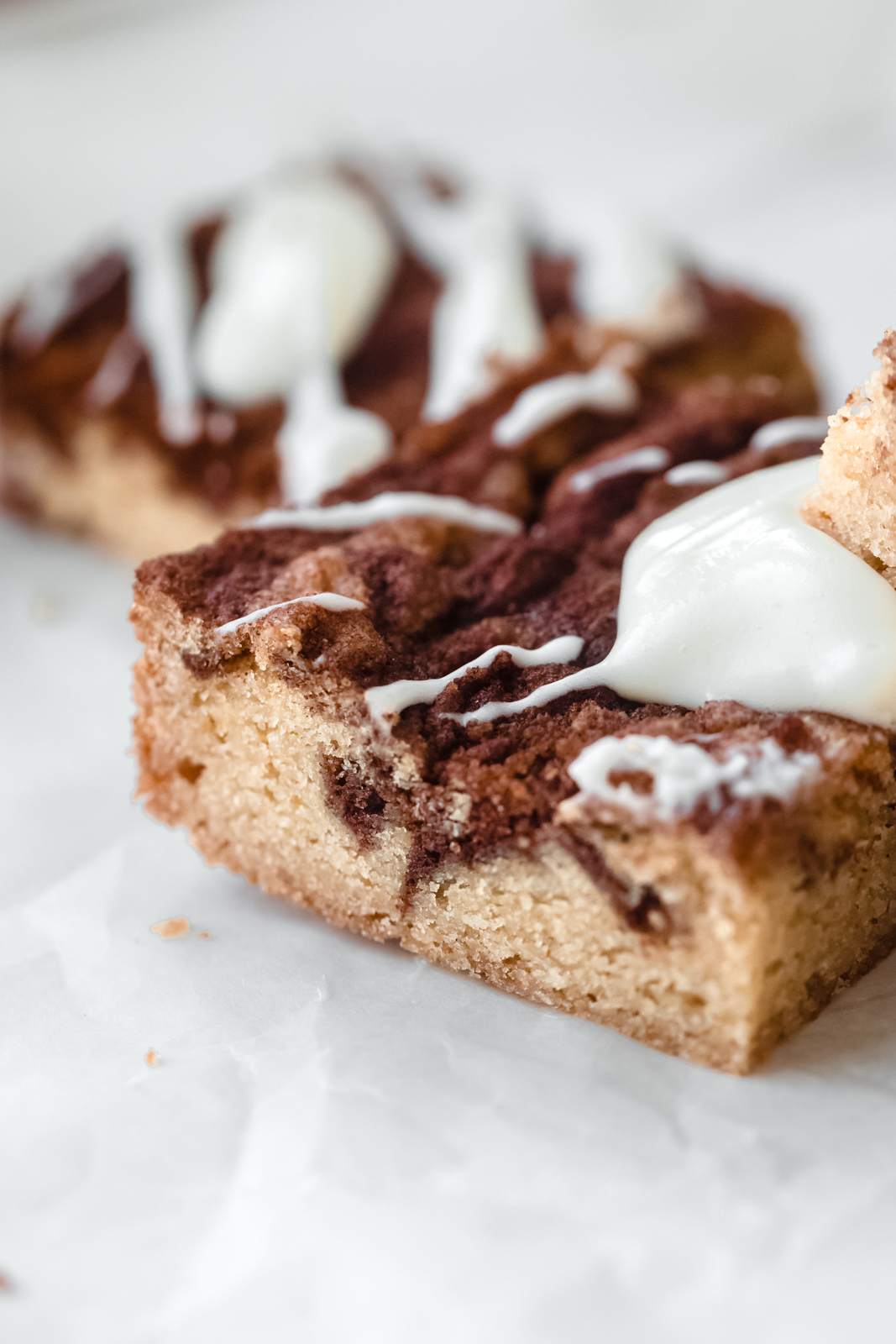 Can you freeze a batch of these?

Yes, these blondies can be frozen. However, I don’t suggest freezing once you’ve iced them. I find that the icing doesn’t hold up as well as the blondies. But you could, however, make a batch of the cinnamon roll blondies, freeze them, and frost them even a day in advance before serving.

I hope you’ll give these cinnamon roll blondies a try! They were a big hit with my crew, and I’m willing to bet they will be with yours too! 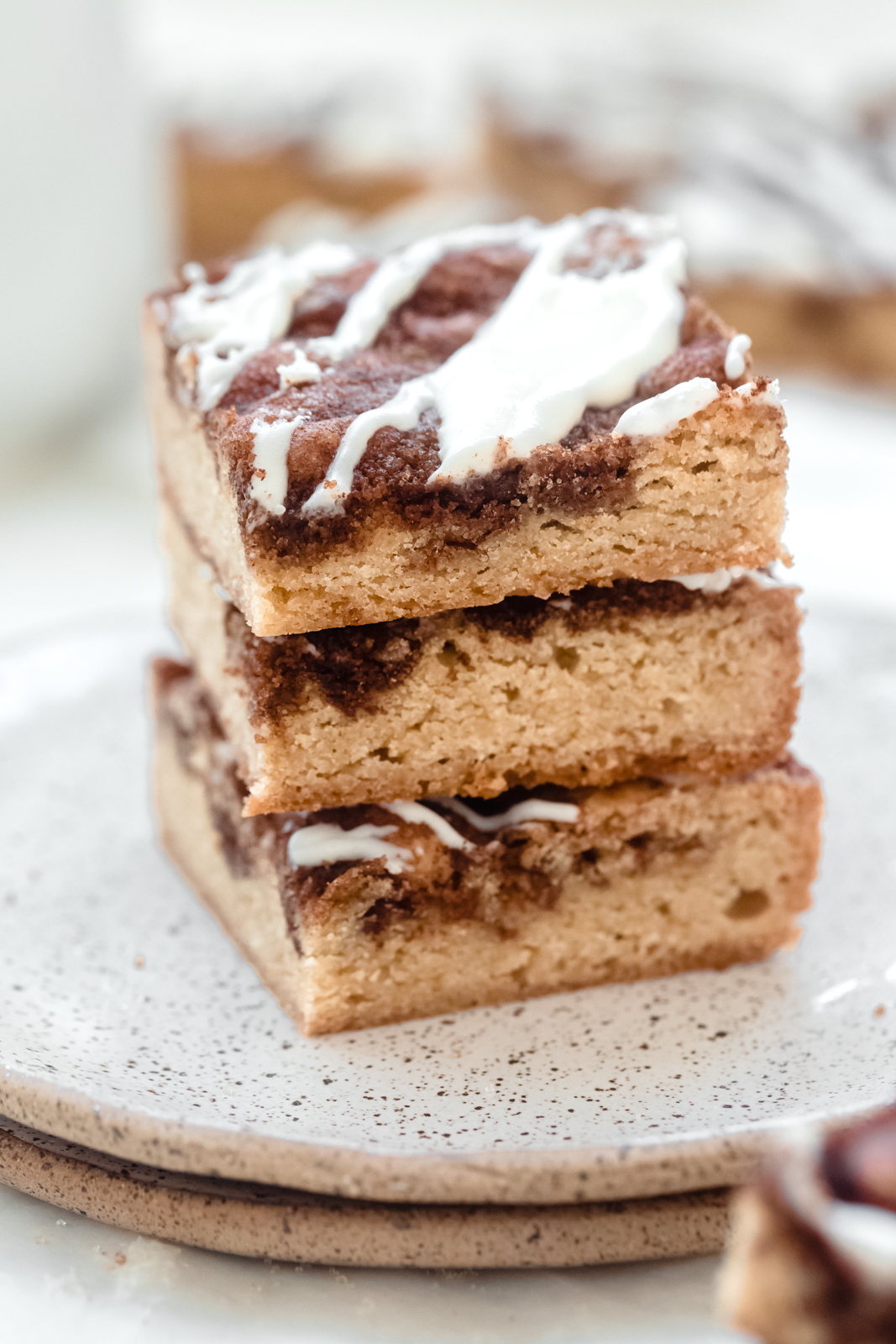 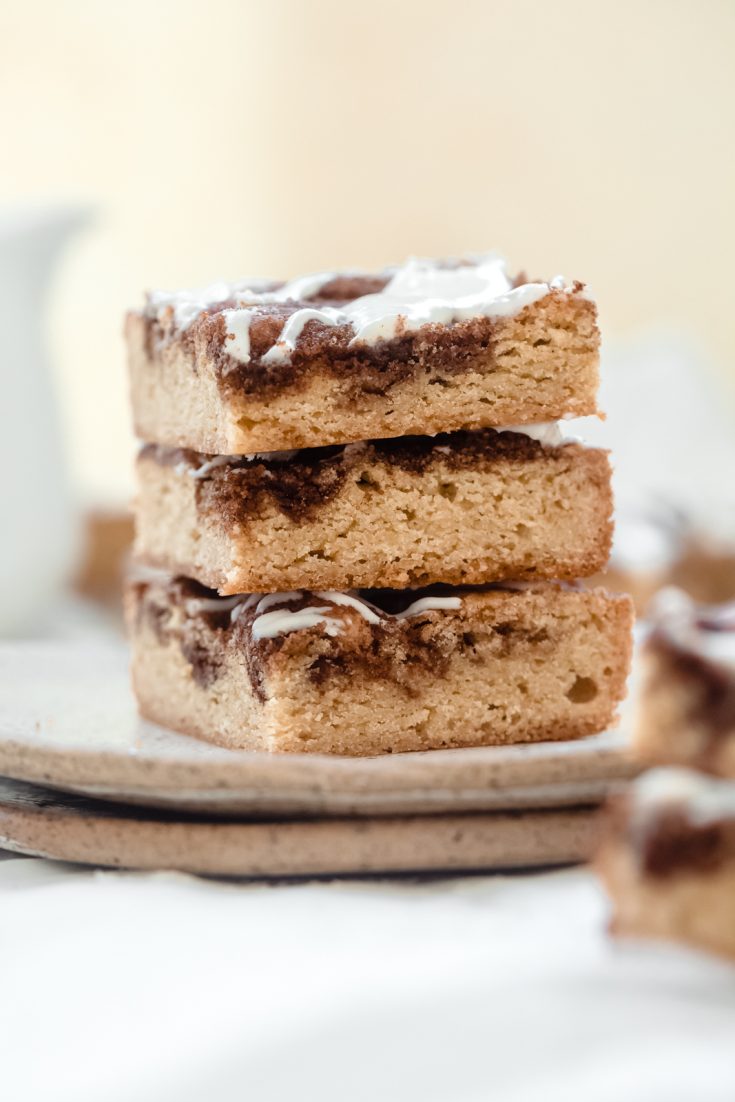