A soft and tender cinnamon apple crumb cake topped with lots of jumbo crumbs! I love adding walnuts to the topping because it adds so much texture. This is seriously the perfect accompaniment to a cup of coffee on a crisp fall morning!

Today’s post is sponsored by California Walnuts! We are using their delicious walnuts in the crumb topping of this fall-inspired apple crumb cake.

This apple crumb cake has been my breakfast // snack // dessert of choice more times this month than I’d actually like to recall at the moment. And while I’m starting Monday off with all the honesty, I might as well tell you that you’ll also occasionally (read: almost always) find me stealing all the crumbs off of hubby’s cake as well. There’s just something about a good buttery crumb topping that just makes fall mornings a little more perfect.

When I say my crumb cakes are ‘crumby’, I mean they are extra super-duper heavy on the crumbs. Would you ever OR have you ever heard anyone say, ‘this cake has too much crumb?’ I’ll tell you why. Because there’s no such thing!

We’re talking about three amazing layers all jam-packed into one cinnamon apple crumb cake. And so much taste and texture in each bite. It starts with cinnamon, butter, sugar, and walnut jumbo crumbs. Then you get these thinly sliced apples that are soft and salty-sweet from being bake between a vanilla cake and buttery crumbs. And finally comes the vanilla-scented cake base. Talk about heart emojis x 10.

The recipe starts with the easy crumb topping. You’re going to melt the butter in the microwave in a small bowl while you whisk together a little AP flour, light brown sugar, granulated sugar, cinnamon, and ½ a cup of California Walnuts in another bowl. The walnuts add such nice texture and nuttiness to the crumb cake. Plus, melted butter, flour, and sugar-coated walnuts become crunchy little tidbits when they get a little baking time in. Which literally makes my morning cup of joe, extra perfect.

The next main component – apples. This is a cinnamon apple crumb cake after all. When I think of fall desserts the very first thing to go through my mind are apples. Growing up right outside of Chicago guaranteed two things come October, there would be colorful leaves everywhere and loads of apple picking to be done. My brother and I would come back with a few brown paper bags overflowing with them each year. Never tasted an apple as good as one that was hand-picked. And till this day the smell of apple cinnamon cakes reminds me of my childhood.

Now that we’re in the thick of apple-picking season, it’s only appropriate that we make a cinnamon apple crumb cake to celebrate! Also, if you went or are going apple-picking, pick a shiny one out just for me. My search for an ‘apple farm’ in Houston is still ongoing!

This is the best cinnamon apple crumb cake recipe

The cake portion of the apple coffee cake is pretty straightforward. It starts with whipping the butter and adding in the sugar, followed by the vanilla to add lots of flavor. Follow it up with the eggs, one by one until each is incorporated completely before adding the next. Once that’s taken care of, we’ll add the flour mixture in three additions alternating it first with ¼ cup of greek yogurt and the second time with 2 tablespoons of milk. This really helps keep the cake both tender and moist.

Once it’s all ready to go, we’ll add the apple cake batter to a prepared pan. I find a springform pan works best for this recipe because it makes it super easy to get the cake out of the pan. Follow up the cake batter with the thinly sliced apples. And finally, top with all the crumb topping.

Now, just sit back while the oven works its magic. The incredible smell of cinnamon, apples, and vanilla waft through the whole house. Hands down, better than any fall-scented candle I’ve ever bought. Plus there’s crumb cake to enjoy at the end of the rainbow.

It’s a win-win situation for sure! 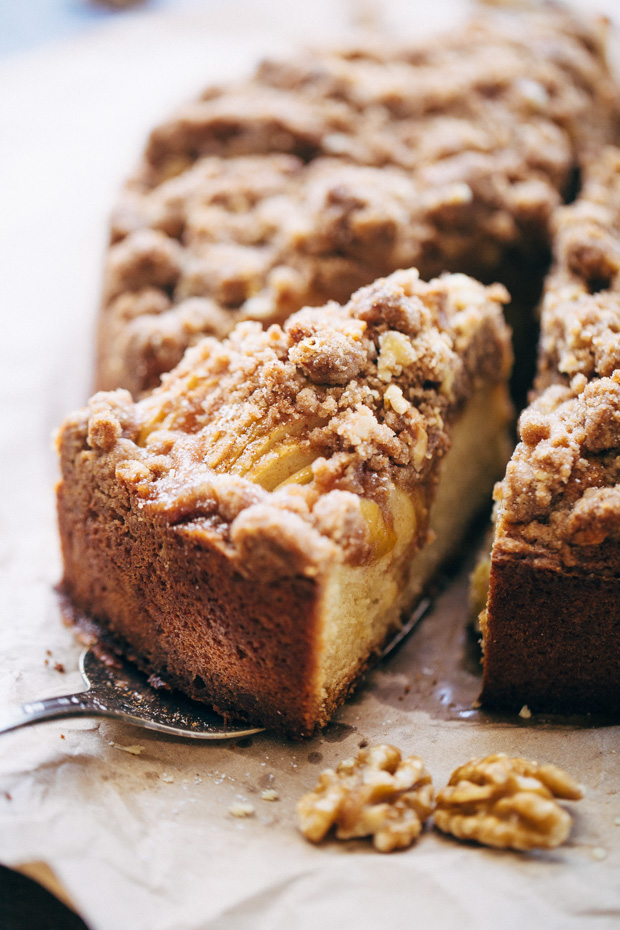 Thank you to our friends over at California Walnuts for sponsoring this post. We truly love working with companies that promote good, wholesome ingredients!